Varnish or Potting, Which one is Better to Avoid Humming Noise from Inductor

Someone just tell me that, "varnishing an inductor can reduce humming noise much better than encupsulating it", and this is what his friend told him where his friend worked in power supply field for over 10years.
(But I don't know did his "encupsulating" means potting)
Or did he mean varnish the winded core first, then pot it??????

I agree with varnishing an inductor can reduce audible humming noise, as varnishing the winding can hold the magnet wire at its position and prevent it from vibration.
But I would rather think that potting the inductor should works even better.
Please correct me if I'm wrong :)

May I know more information on it?

Potting inductor:(pot the inductor by applying glue between the winded core and ferrite shielding) 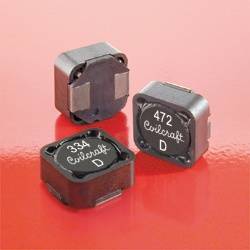 Varnsihing inductor: (dip varnish the winding, maybe after or before assembly the winded core on the header)

(Please only refer to the inductor's sharp, but not size....)

It is a little better to talk about processes rather than results.

The traditional process is varnish dip and bake. That is very economical and fast. It works pretty well for most small coils which can stand having some areas free to vibrate.

If your application warrants it, the best way is to use an epoxy, applied either by vacuum/pressure or vacuum only. This gets the epoxy into almost all the tiny spaces. This is expensive and somewhat slow. However, there are many shops who do custom work in this area; you may generally find them by looking for "VPI coils" or something similar.

The ultimate goal is to have a rigid material holding every bit of winding in place, but you always end up making tradeoffs.

I do not think that either will reduce humming from a resonant circuit with inductor and capacator. Humming is caused by a frequency mis-match and a resistor has to be added to dampen the oscillations. The varnish is only meant to insulate the inductor, be it a 700HP motor or a three micro-henry inductor.
Bob S

Capacitors generally do not hum. Inductors do hum, for either
a) loose windings in coils, or coils that are not firmly secured in place, or
b) magnetostriction in magnetic material, or loose laminations in iron, or not fully compressed gap in pot cores. These can be exascerbated by mechanical resonances near the operating frequency.
vk6kro
Science Advisor

Better quality transformers use a lot of very thin laminations.
These are thin sheets of soft iron intended to stop eddy current losses.

Being so thin, they tend to bend easily and, unless they are packed very tightly, they rattle or bang against each other due to magnetic forces caused by the currents in the transformer windings.

Varnish has been used as a removable glue to avoid this. It grips the outer edges of the iron strips and fills any gaps between them,
Because it is varnish it will come apart with a little force and this would allow the transformer to be rewound.

Potting is a much more permanent process. It involved dipping the whole transformer in a two part epoxy mix. This is normally thicker than the varnish and grips better, so it would probably do a better job. However, rewinding or repair of the transformer is not possible after potting.

Either type of coating is quite capable of producing a quiet transformer, though.
victorb

Thanks all your replys, it's informative for me and let me learned something more.

I think I got my answer.
The potting inductor that I posted is not really potted as I think (at least for the 1 that I disassembled), I disassembled 1 and found that's only EPOXY at the top gap of the inductor, and those EPOXY doesn't goes down to other internal part (winding, base...). And that's only 2 turns of tape (or 1 turn on somekind of unknown soft plastic tube) to serect the winding. I think that should called encapsulated, but not potted.
TVP45

Oh, the other process that might help (and I forgot to say) is wet winding. I've used this with superconductor coils (where any movement can be a disaster). You simply apply epoxy to the wire as you wind it, perhaps a cm or so before it reaches the bobbin. It gets messy, but there's epoxy everywhere.
mheslep
Gold Member

Aside: the operating profile of the coil is not mentioned, but keep in mind the potting process is will reduce the heat dissipation of the magnetics a bit, so for a given ambient it will run a bit hotter.
TVP45

mheslep said:
Aside: the operating profile of the coil is not mentioned, but keep in mind the potting process is will reduce the heat dissipation of the magnetics a bit, so for a given ambient it will run a bit hotter.

Good point. You can mitigate that a little bit by using a high thermal conductance epoxy such as Stycast 2850, but that's still only maybe 2% that of steel, so...
Share:
Share

Related Threads on Varnish or Potting, Which one is Better to Avoid Humming Noise from Inductor

Which one is better

M
Is it better to buy a bench PSU, or build one?

Which is better -- amp ground connected to frame or battery?

Which is a better method for Circuit Analysis?

How to determine which battery is new one?

Which is better to connect a bulb switch ?