Hi, I'm unsure if I'm posting this in the correct place, so apologies in advance if not. I looked at the study board, but the post template doesn't apply to my question.

I'm a layperson who had previously only read popular science books on QM, but has recently been watching some more in-depth lectures on YouTube, in order to get a better idea of the mathematical concepts that model the theory. Specifically I've attempted to get most of my information from "Lecture 1 | Quantum Entanglements, Part 1 (Stanford)" and the follow-up lectures by Leonard Susskind.

On the back of this, I've been attempting to explain some of those concepts in writing (for my blog - nothing professional), concentrating on explaining imaginary and complex numbers, and why the maths and geometry of using the complex plane models the observed phenomena.

I'm only drafting, but am desperately needing a sanity check, to find out whether any of the conclusions I'm drawing are complete misunderstanding on my part, or whether I'm on the right track with some of them, but need amendments to my wording etc..

So, if anyone has time to take a look below and give me any feedback, I'd be very grateful.

One last thing - if I am completely wrong on all or any of these conclusions, please don't laugh too hard! I have almost no math skills, so I'm trying to just understand the concepts at a high level, and then use that to make visualizations. The main reason I'm writing it all down is for my own reference!

I realise that this endeavor may not actually be possible, but need to find out... think of it as an experiment ;)

NOTE: The sections in red are those I am most concerned about. Also, I've skipped the first part where I introduce "i".

The imaginary number i and multiples thereof, are used in a series (i, 2i, 3i etc) to create an extra axis on a graph, in addition to the regular x y and z axes representing the usual three spacial dimensions. In the visualization below, the three usual dimensions are combined into a single real axis: 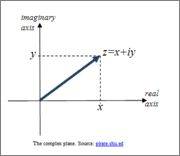 This full graph on which both real and complex numbers can be plotted is known as the complex plane, and in quantum mechanics, it's not points that are plotted, but quantum state vectors, each representing a potential value for an observable of the system (for example the quantum spin). The quantum state vector in the illustration above is simply the arrow.

Now imagine a new vector that is the mirror image reflection of original vector across the real axis as shown below with the blue examples.

Above you can see the original quantum state vectors y and x as the red vectors, and their complex conjugates y* and x* in blue. When the complex conjugate of a complex number is drawn, there is always an angle between them. This can also be drawn as triangle - just imagine a line between x and x*. The interior of this triangle can be thought of as a complex vector space, with vectors therein representing probability values. These probabilities indicate the likelihood of finding the system in a certain state when measured, and corresponds to one of the main features quantum mechanics, namely superposition.

Quantum state vectors can be manipulated using standard mathematical linear operators such as addition and multiplication. The mathematics of complex numbers is such that the results of these operations can be either another complex number, or a real one. One such operation is visualized as a rotation.

Note that if the state vector is entirely on the real axis, then in the maths it's complex conjugate is itself. In the visualization, this means that it has no mirror image, no rotation is necessary to make it real, and it's vector space of probabilities has no size. Correspondingly, in quantum mechanics, the observable of the system is not in superposition, but instead is a measured real quantity.

Now consider that each quantum state vector (e.g. y and x above) represents just a single aspect of the system's state, and that for each vector there is a unique rotation (the Hermitian operator) that will bring it onto the real axis (this is where eigenvalues and eigenvectors come in, but I won't go into those concepts here).

So for example, if you rotate the entire system to bring x onto the real axis, then y will have rotated as well and will not be real. If you then rotate the system again so that y is real, then x returns to no longer being real. This feature corresponds to the uncertainty principle, where if you measure one observable of a quantum system, then the complimentary observable will be uncertain, or in other words, an unreal complex number.

Similarly, it's the use of i and the complex plane that allows quantum mechanics to model other features quantum mechanics like entanglement. Specifically, on systems containing two or more particles, certain mathematical operations do not commute. In maths with real numbers, that would be the equivalent of saying that 2 x 3 does not equal 3 x 2, but that they yield two different answers. This equates to an an extra state being available over and above those you might expect, and that state corresponds to the entangled systems.

The upshot of all this is that each unintuitive feature of quantum mechanics is modelled by the maths, and therefore if one can see what the maths is doing, then perhaps one can begin to get a better picture of what might be happening physically.

However, there is danger here. This is where science meets philosophy, and interpretation is everything.

Not always in physics do the apparent properties of the maths correspond to how things are physically. The use of complex numbers in classical wave mechanics described above is a good example, but there, at least as I understand it, the use of the extra dimension introduced by i is more like a shortcut to avoid doing harder, more regular maths. In quantum mechanics I don't believe that's the case. The i is a mandatory part of the theory.

Alternatively, sometimes different mathematical models are devised that yield the same results because they are equivalent. In quantum mechanics this already happened, where Matrix Mechanics was used before complex numbers to do exactly the same thing. In this case, what little can be drawn out of looking at the maths in question looks very similar to the complex plane model anyway, but there are other examples in physics where that's not the case. Godel's novel solution to Einstein's field equation is a good example.

I've now had an answer from elsewhere on where I've gone wrong with this and where I need to direct my attention to get a better picture, so please continue to ignore this post!
MayhemTheory

Disclosure: The person who has authored this thread has stated... "I realise that this endeavor may not actually be possible, but need to find out... think of it as an experiment" ;)

I show an example of how I "exercise" the (I'll call it) Non-Linear Quantum Circuit of the mind.

I had a hard time trying to grasp these concepts because I don't think in "words" or in linear(progressive logic) equations, I kept leaping to see what was being introduced or expanded upon, it was not until I (almost embarrassed to admit) seen a great movie before my minds eye fluttered open and I was able to start to see and understand QM.
The movie was "Mindwalk" circa 1990 Directed by Bernt Capra he had also wrote the screenplay as an adaption of a short story by his brother Frijtov Capra(author of the "Tao of Physics") I in this move was introduced to systems theory, which in turn made me writh the math an alternate way......
That would be as follows:
I'd classify myself as a cross between a layman and a student! I say it like this so none confuses the fact that college students are percieved as doing anything to get a lay, man!
But I jest because as I've come to understand the quantum world, it's the more multi-LAYered the puns can achieve and the more complex the pun serpantine and the more subtly the pun itself enters our perception, then maybe we can to a quantitatively EXACTING degree of uncertainty, never truly have a firm grasp.
To paraphrase the Bard, "The pun is MIGHTIER than the sword!"

The way I actually came to be able to see the math is, "if you expect the unexpected....
Then THAT's what you'll get!!!"

Or I guess you could say without the need for the math: "Reality is EXACTLY what you expect. ALSO what I expect. Also what That guy over there expects...ect. I just wish a few more of us could agree!"

Complex numbers are used to describe waves because the math notation is much neater. It is entirely possible to do without them, but why do it the hard, messy way?

The quantum wave function cannot be directly observed, you are quite right. I think it is best to not worry about whether it is "real" or not. Just use the math that works and leave it at that.

Mathematicians who can work without visualizing things have a big advantage. I was never able to do it.
MayhemTheory

True without the math there cannot be a firm base for understanding where whomever takes the time to work the math can grasp the sometimes apparently contradictory n-state or the fact everything on the Quantum lvl doesn't "exist" per se but it has a "TENDENCY" for expressing it's self in probability patterns.
I really get a kick how, when a particular measurement on let's say an electron whether it be; rotation spin direction position or superposition and/or even IF at that precise moment it is "in" or "out" of perceived "existince" at that moment the probability patern or n-state collapses into EXACTLY where/how/if we "expect" it!
Makes the whole concept of that question we ask ourselves periodically, "Am I making ANY kind of difference in this world?" or the alternate version "Does anything I do matter in the 'Grand Scheme' of things?" completely nonsensical! Heh-heh, from what I've seen and learned no matter what you think/feel/believe/worry(especially worry) about, the answer "is" irrevocably YES! To paraphrase a cliche; "We couldn't have "Quantum" without 'U' AND 'U' so, couldn't we just get along!? SHEESH!"
Finally before you start to rip ANY hair out in frustration, try to remember, there's a reason
that the language of the "Quantum Sciences" (more of the disaplines are joining this too) has been modified to remove the "static" state "IS" (with all it's variations) as completely as possible from methods of communication (and hopefully from perspective on this lvl) because no-one can EVER say ANYTHING "IS" in a particular "pattern" untill "proven"(another variation of "is" heh) and it's for this reason, amongst others, when confused, I turn twards philosophy! MOST of the time I see no difference in the math and....
SOMETHING so-and-so said when-that-thing-happened and blah, blah. Heh......
That's MayhemTheory and I'm sticking to it............until distracted again....OO, sumpin shiny, ..... ...scuse me.......
Share:
Share

I Queries on some QM concepts

The concept of Rotation in 3-d in QM

The Mathematical Structure of QM and the Stern Gerlach