Voltage and Energy and lack of directionality 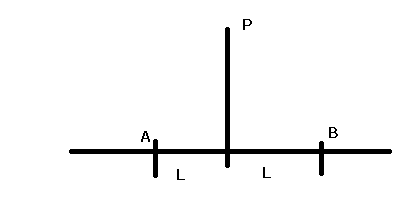 However, this does not mean that the force acting on a test charge at P would be the same. The force per unit charge at P is related to the gradient (or slope) of the potential at P, i.e. the force depends on how the voltage changes at P. So, although the value of the voltage might be the same at P, its slope may be different. Let me show you what I mean with a few plots.

This first image is when there are two equal charges, Q, located and A and B and shows the voltage (with zero at infinity).


http://img202.imageshack.us/img202/5629/msp313919h2e51i28ff61ie.gif [Broken]​
Notice that in both figures, you can choose any point along the line x=0, and the voltage will be equal. However, what is different is the gradient (or slope) of the voltage field. It is this that determines the force acting on a test charge. So whilst the force acting on a test charge is not the same in the two cases, the energy is.

I hope that this helps.
Last edited by a moderator: May 5, 2017
chrisbaird

Ok, that makes a lot of sense. Thank you
Log in or register to reply now!

Related Threads on Voltage and Energy and lack of directionality

Conservation of energy, (lack of) proof

Is gravity a force or a lack of a force?

Does a proton signify lack of electrons?

Lack of Orientation of a Point Mass