What is the purpose of resonance structures?

I`ve started reading up and practically making various resonance structures of various molecules. Though in the book I am reading I have only been subsituted with the information that it can be very neccessary for chemical mechanics later on in the book. Is this correct?
Also, the book doesn`t seem to tell me why they are of ANY practical purpose?

I understand this is way to represent the same molecule but bonded differently, because of the delocalized electrons. Like i.e. benzene.

However, I don`t seem to be able to get why they are neccessary to know within organic chemistry and I am unable to find an answer to this question on the world wide web.
What practical purpose does it serve? Thanks.

The book is correct.

What purpose do you consider practical? Is creating a molecule practical?
DrDu
Science Advisor

In the process of a chemical reaction, the bonding in the molecule changes. This is not an abrupt change, but a gradual one.
Molecules are quantum mechanical objects. One of the fundamental QM principles is the superposition principle, stating that given two states, any combination of the two is also a valid state. If you look at a chemical reaction one state described by a VB structure changes into a state with another VB structure. Inbetween you have a superposition of both VB structures with varying percentage of the two, i.e. resonance.
ChiralWaltz

I noticed the superposition relationship last week but was waiting on some confirmation. Thanks DrDu
What does VB stand for? I'm in United States and don't know :(

Lover of gangsters,
you may want to look at:

When we attach functional groups to the ring, we find a higher probability of a particular RS occurring, thus offering reaction pathways to the molecule we desire. There are a few ways to influence an aromatic (ring) system's environment to achieve a predominance of a particular RS (say you want to react with RS A instead of RS B). This offers an explanation of how to do it.
DrDu
Science Advisor

ChiralWaltz said:
What does VB stand for? I'm in United States and don't know :(

VB stands for "Valence Bond" theory. It is also known as Heitler London theory as the two gave the first description of bonding in H2.
gangsterlover

ChiralWaltz said:
The book is correct.

What purpose do you consider practical? Is creating a molecule practical?

Calm yourself gentleman, I don`t mean any harm nor do I wish to make you wishful of approaching me sarcastically toward such an important question, that is for me that is... My name is Dr King Shultz and I wish to parlay with you. Now if you wouldn`t mind speaking English with me so we can move on and resolve this issue of mine. So you wouldn`t mind explaining to me what that is that makes resonance structures so practical in practically creating molecular molecules?

Thanks, and if you are the one who could explain this to me, then you are exactly the one i am looking for.

Note:
I don`t seem to be able to graps how just moving the density of electrons around on a resonance structure, like for instance i.e. benzene could be used to practically create a new molecule.

Take a look at this picture please, and how can "moving" around the electron density in that ring make a new molecule. Are those two resonance structures of benzene the same benzene. 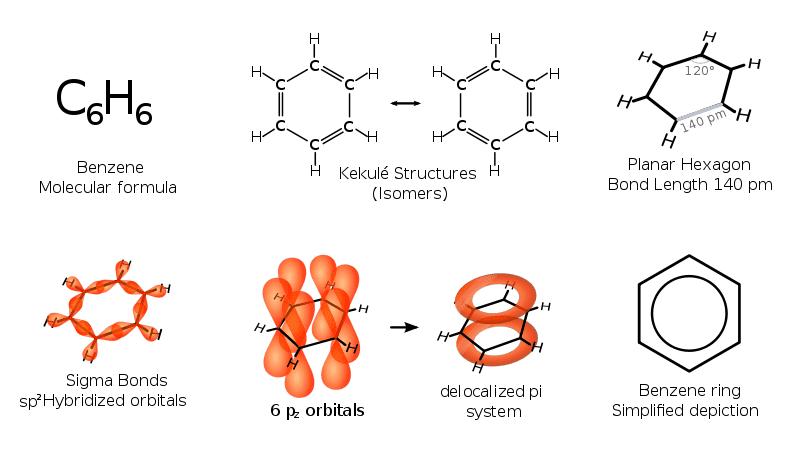 gangsterlover said:
Take a look at this picture please, and how can "moving" around the electron density in that ring make a new molecule. Are those two resonance structures of benzene the same benzene.

I listen, however, I am more or less or pretty much mostly interested in it`s practical purpose of creating new molecules. That is ALL i am interested in. How does drawing resonance structures help to create a new molecule? thanks.
ChiralWaltz

We are not out to get you, we want to help you.

I must be mentally impaired or psychologically retarded, but all I want is an answer to how drawing resonance structures can benefit practical synthesis of new molecules? Is that really so complicated that a simple short answer does not exist?
DrDu
Science Advisor

Resonance tends to stabilize a molecule or intermediate. So if there are several more or less equal transition states for different products, the one with more resonance stabilization will be energetically favoured:
For the example given by ChiralWaltz this is explained e.g. here:

Dude, do you have google? Check out my second post. The key words are INCREDIBLY important!

not all resonance structures are symmetrical

lets say "resonance structures can form configurations A, B, C"

we have ways of making A talk more (favored reaction) with certain factors (donating/withdrawing groups, environment), which is what we want. We want the A group to react, k?

label the benzene ring with numbers 1-6

position and FG dictates which number site reacts (ortho, meta, para) <-- this is what A, B, C are talking about (edit)

we make different molecules by attaching through different positions

Does this answer your question?

I would greatly appreciate it if you research my second post. Please be honest with us, we want to help you!
Last edited: Oct 11, 2013
gangsterlover

Okey, I`ll take a look at that link DrDu and I`ll also do some some more reading up on the meta, ortho and para stuff. I am 1/5 of the organic chemistry book I am reading right now, so I`m not sure if I should read up on this just yet. But eventually I will. Thanks though, and sorry for the frustration surrounding me :P
ChiralWaltz

DrDu said:
Resonance tends to stabilize a molecule or intermediate. So if there are several more or less equal transition states for different products, the one with more resonance stabilization will be energetically favoured:
For the example given by ChiralWaltz this is explained e.g. here:

Gangsterlover,
Please don't wait to read up on this. Try to think of this in terms of electrostatic potential maps. Where are the electrons the happiest? Electron negative atoms tend to keep electron density.

Sorry, 3 year old son is naked and wants to take a shower. I'll get back to this when I can.
Last edited by a moderator: May 6, 2017
Yanick

Resonance structures are a more complete description of chemical bonding than are single Lewis structures because they allow us to show the electronic dynamics of a molecule with static pictures. This is not always necessary of course, as no one will complain if you draw one structure for ethanol but not all molecules are as simple as ethanol.

To get away from aromatic systems, take the difference in acidity of methanol and acetic acid. The only difference between the two molecules is a couple of electrons and an oxygen atom. The pKa of acetic acid is more than 10 units lower than the pKa of methanol. Can you explain this behavior? Induction, you say? Well that effect is not so strong, compare for instance acetic acid and chloroacetic acid. The pKa difference is about 2 units, a far cry from an ~11 unit difference between methanol and acetic acid. You can reason it out by showing that there are two equivalent resonance forms of the carboxylate anion, therefore you can see that the charge is evenly spread amongst two oxygen atoms. It is not the case that there is one neutral double bonded oxygen and one negative single bonded oxygen on the carbon atom. Its closer to reality to describe each oxygen with a one and a half bond and a half of a negative charge. With this spread in charge comes a stabilization of the anion and hence, a lower pKa (a stronger acid).

You can also consider the case of carbonyl addition reactions. Why is the carbonyl carbon an electrophile? Looking at any garden variety ketone/aldehyde, why should a nucleophile go and attach to the carbon and not the oxygen? Resonance structures help explain this behavior.

The stability of charges/radicals at allylic or benzylic positions are explained by resonance structures of the ions/radicals produced.

The list goes on and on. You will appreciate this more if you try and learn Organic Chemistry conceptually instead of by rote memorization. Pretty much 99% of first year O-Chem can be explained by 3 things: Sterics, Resonance, Induction.
Share:
Share

Related Threads on What is the purpose of resonance structures?

D
What really are resonance structures?

E
What is the purpose of hobby chemistry?
2

P
What tutorial for Resonance structures?

S
What is the purpose of NaBH4 in this coboxalamine alkylation?