Why do material particles interact?

Why do fermions exchange bosons with each other?

What kind of answer are you looking for? This question is very broad.
_PJ_

Do they exhange bosons?

If "an electron" is an excitation of an 'electron field', its electric charge proprerties suggest it excites and interacts with EM field, which is essentially, the photon field.
As such, the excitations of the photon field as result of two electrtons can be intetpreted as "virtual photons" exchanged between the two to determine the momentum differential...

Vectronix said:
Why do fermions exchange bosons with each other?

In quantum field theory, the interactions that fundamental fields/particles have with each other are encoded by the monomials of the field variables that appear in the Lagrangian/action functional that defines the field theory.

For instance the electron-photon interaction 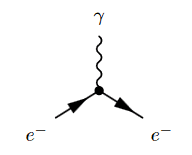 is reflected by the fact that the Lagrangian density of quantum electrodynamics (example 5.11 in the PF QFT notes) contains a monomial of the form

where ##\psi## corresponds to the electron field and ##a## to the photon field.

So from this perspective your question is this grand question:

1) Why does the Lagrangian density of the standard model of particle physics have the broad form it has? Namely the form of Einstein-Yang-Mills-Dirac-Higgs theory?

That's an excellent question. A related question is:

2) Assuming the Lagrangian density of the standard model of particle physics is of Einstein-Yang-Mills-Dirac-Higgs theory-type, why does it have the precise numerical coeffcients that it has, for the couplings between the particles?

This second question has been much discussed, but remains wide open. The first question, the one that you are effectively asking, is receiving less attention, but regarding the first question there are some intersting hints.

Namely there are deeper principles which one may invoke, that imply that physics is modeled by Einstein-Yang-Mills-Dirac-Higgs theory, even if they do not imply the precise numerical values of masses and couplings.

PeterDonis said:
What kind of answer are you looking for? This question is very broad.

I was looking for the kind of answers given here. I will certainly try to take a deeper look into the explanations given here so I can understand physical interactions. Thank you for your replies!
Log in or register to reply now!

Related Threads on Why do material particles interact?

B Why do photons only interact with charged particles?

B Why doesn't the plate interact with the particle in double slit?
2

A Do virtual particles interact with each other?
2

Matter waves of various particles - do they interact?

Why do electron-electron-interactions raise the energy level?