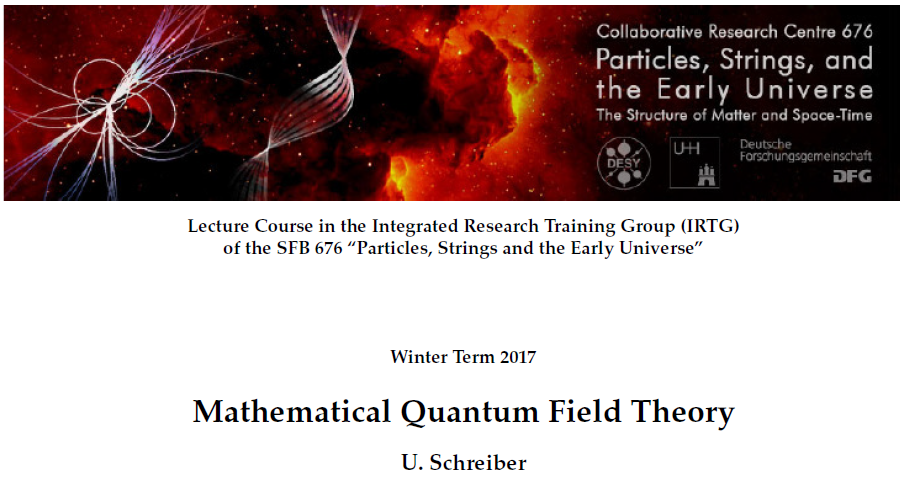 We aim to give a fully local discussion, where all structures arise on the “jet bundle over the field bundle” (introduced below) and “transgress” from there to the spaces of field histories over spacetime (discussed further below). This “Higher Pre quantum Geometry” streamlines traditional constructions and serves the conceptualization in the theory. This is joint work with Igor Khavkine.

In full beauty these concepts are extremely general and powerful; but the aim here is to give a first precise idea of the subject, not a fully general account. Therefore we concentrate on the special case where spacetime is Minkowski spacetime (def. 2.17 below), where the field bundle (def. 3.1 below) is an ordinary trivial vector bundle (example 3.4 below) and hence the Lagrangian density (def. 5.1 below) is globally defined. Similarly, when considering gauge theory we consider just the special case that the gauge parameter-bundle is a trivial vector bundle and we concentrate on the case that the gauge symmetries are “closed irreducible” (def. 10.6 below). But we aim to organize all concepts such that the structure of their generalization to curved spacetime and non-trivial field bundles is immediate.

This comparatively simple setup already subsumes what is considered in traditional texts on the subject; it captures the established perturbative BRST-BV quantization of gauge fields coupled to fermions on curved spacetimes — which is the state of the art. Further generalization, necessary for the discussion of global topological effects, such as instanton configurations of gauge fields, will be discussed elsewhere (see at homotopical algebraic quantum field theory).

Alongside the theory we develop concrete examples of the real scalar field, the electromagnetic field, and the Dirac field; eventually combining these to a discussion of quantum electrodynamics.

Pointers to the literature are given in each chapter, alongside the text. The following is a selection of these references.

The discussion of spinors in chapter 2. Spacetime follows Baez-Huerta 09.

The functorial geometry of supergeometric spaces of field histories in 3. Fields follows Schreiber 13.

For the jet bundle-formulation of variational calculus of Lagrangian field theory in 4. Field variations, and 5. Lagrangians we follow Anderson 89 and Olver 86; for 6. Symmetries augmented by Fiorenza-Rogers-Schreiber 13b.

The identification of polynomial observables with distributions in 7. Observables were observed by Paugam 12.

The discussion of the Peierls-Poisson bracket in 8. Phase space is based on Khavkine 14.

The derivation of wavefront sets of propagators in 9. Propagators take clues from Radzikowski 96 and use results from Gelfand-Shilov 66.

For the general idea of BV-BRST formalism, a good review is Henneaux 90.

The Lie algebroid-perspective on BRST complexes developed in chapter 10. Gauge symmetries, may be compared to Barnich 10.

For the local BV-BRST theory laid out in chapter 11. Reduced phase space we are following Barnich-Brandt-Henneaux 00.

For the BV-gauge fixing developed in 12. Gauge fixing we take clues from Fredenhagen-Rejzner 11a.

The discussion of quantization in 13. Quantization takes clues from Hawkins 04, Collini 16 and spells out the derivation of the Moyal star product from geometric quantization of symplectic groupoids due to Gracia-Bondia & Varilly 94.

The discussion of causal perturbation theory in 15. Interacting quantum fields follows the original Epstein-Glaser 73. The relevance here of the star product induced by the Feynman propagator was highlighted in Fredenhagen-Rejzner 12. The proof that the interacting field algebra of observables defined by Bogoliubov’s formula is a causally local net in the sense of the Haag-Kastler axioms is that of Brunetti-Fredenhagen 00.

Our derivation of Feynman diagrammatics follows Keller 10, chapter IV, our derivation of the quantum master equation follows Rejzner 11, section 5.1.3, and our discussion of Ward identities is informed by Dütsch 18, chapter 4.

These notes profited greatly from discussions with Igor Khavkine and Michael Dütsch.

Learn the Physics of Virtual Particles in Quantum Mechanics

Struggles with the Continuum: Quantum Electrodynamics