Consider 2-propanethiol, shown below. Would you expect its boiling point to be higher or lower than that of 1-propanethiol? Why? 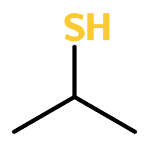 I looked it up, and 2-propanethiol does have a lower boiling point than 1-propanethiol, I just can't figure out why. I would have said that moving the S-H group to the middle of the molecule "interrupts" the hydrophobic region of the compound, but the question is referring to pure solutions, so there's no water to not interact with. My next best guess is basically the same thing, but instead of hydrophobic interactions, its Van der Waals forces. Meaning, instead of the entire hydrocarbon chain acting as one unit with a large number of electrons to be displaced, it is broken up into two units with fewer electrons each. But that really doesn't seem like a good explanation. Any ideas? Thanks so much!

Why acetaldehyde has a higher boiling point than ethylamine?

What affect does altitude have on boiling point?

Why does sucrose have a higher density than water