Will this rope break due to the tidal forces or not?

While I was thinking about how tidal forces can make objects float at the surface of a planet orbiting a massive object like a black hole, the fact that any material on the Earth isn't held together by gravity only, but also by chemical bonds which give it its tensile strength came into my mind.

The scenario I thought of is as following:

1- A 10 kg metal sphere is tied to a 1 meter long thin rope and this rope is nailed into the surface of the Earth.

2- The tensile strength of the rope is 10 N. (So the metal sphere has to accelerate at 1 m/s2 to break the rope)

3- The Earth is orbiting a black hole at its Roche radius, and so our metal sphere on the surface of the Earth is effectively weightless and floating, but it is still held by the rope.

Here is a simple picture to summarize: 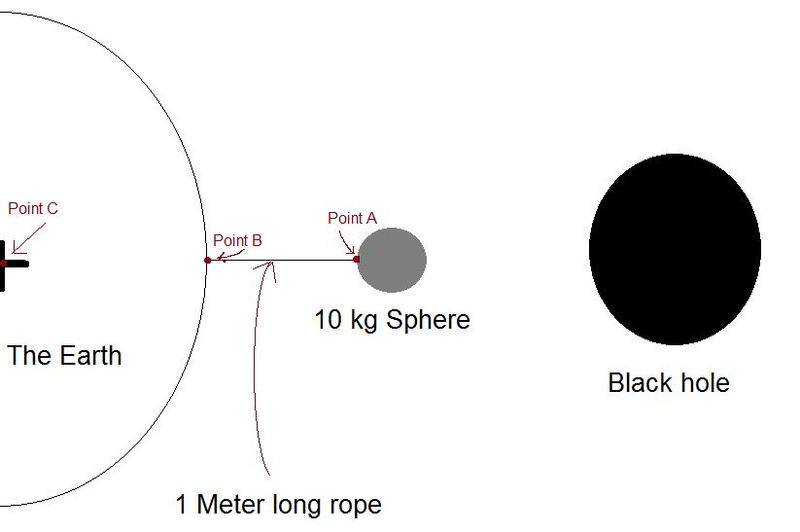 Now, if we move the Earth to orbit the black hole even closer until the tidal forces on Earth due to the black hole become Δa = 10.8 m/s2 and so the metal sphere is pulled by the difference between Δa and the Earth's gravitational acceleration (9.8 m/s2) which is 1 m/s2 towards the BH, will the rope break or not ?

In other words, if a is the gravitational acceleration towards the BH, in order to break the rope, which one do we need ? :

(1), which also means at the Roche radius the sphere is safe for reasonable black hole sizes (Roche limit not much smaller than the diameter of Earth). The distance (CB) has a tidal gravity of 10m/s^2 there, and the Earth is huge.

The sphere still gets attracted by Earth, which provides 100 N of force in addition to the (maximal) 10 N from the rope, so between A and C you can have up to 11 m/s^2 tidal gravity.
Hurricane939

mfb said:
(1), which also means at the Roche radius the sphere is safe for reasonable black hole sizes (Roche limit not much smaller than the diameter of Earth). The distance (CB) has a tidal gravity of 10m/s^2 there, and the Earth is huge.

The sphere still gets attracted by Earth, which provides 100 N of force in addition to the (maximal) 10 N from the rope, so between A and C you can have up to 11 m/s^2 tidal gravity.

I am sorry. The question was not complete and so I edited it. Please read it again.

In any case, I am trying to figure out how far a solar mass black hole has to be to break that rope.
I have calculated that if the difference in the gravitational acceleration between the surface and the center (I named this Δa) is 10.8 m/s2, then the sphere will be accerelating at 10.8 - 9.8 = 1 m/s2 towards the black hole, which is enough to break the rope. isn't that correct ?
mfb
Mentor
Insights Author

Well, at 10.8 m/s^2 it is just at the breaking point. To be more precise, we would have to consider the different centrifugal/centripetal force as well, and add it to the gravitational attraction.

Hurricane939 said:
In any case, I am trying to figure out how far a solar mass black hole has to be to break that rope.

Long before the rope breaks, the Earth will disintegrate.
Hurricane939

mfb said:
Long before the rope breaks, the Earth will disintegrate.

Could you please explain why that would happen ?
mfb
Mentor
Insights Author

The Earth breaks as soon as the tidal gravity between C and B is 10m/s^2, or 10 m/s^2 over a distance of 6370 km. That corresponds to a tiny 1/637000 m/s^2 tidal acceleration over the length of the string, or 1/637000 of its critical tidal acceleration, again assuming the black hole has a reasonable mass (1 stellar mass is more than sufficient).

But the Earth is not bound only by its gravity, the rocks have tensile strength and so at 10 m/s2, free objects on the surface of the Earth will be floating, but the Earth itself will be bound by its rocks tensile strength.
You could arguethat the tensile strength is small compared to the force due to the difference in acceleration, but it would still have to be more than 10 m/s2
Last edited: Jan 28, 2016
mfb
Mentor
Insights Author

Tensile strength is negligible. Let's imagine Earth is made out of solid steel, which is certainly much stronger than rock. Ignore that its mass would increase, I just want to get a number for tensile strength and there is none for generic rocks. Steel has a tensile strength of ~500 MPa, a bit more or less depending on the type of steel, and a density of about 8g/cm^3. That gives a breaking length of ~6.5 kilometers at 10 m/s^2. If we have tidal gravity of 10.5 m/s^2 between core and surface, stress exceeds the tensile strength at a depth of around 150 to 200 km. That is a small fraction of the total size of earth, so it easily rips apart the whole earth into multiple pieces, even 10.1 would be sufficient for that (with steel!). Apart from a tiny crust, most of the interior of actual Earth is liquid, with a tensile strength way below that of solid rock, which again is way below the tensile strength of steel. 9.81m/s^2 would be more than sufficient, as the Earth starts to deform below that value.
Hurricane939

In page 33 here: http://pangea.stanford.edu/~jack/GP170/MarkZoback.pdf you can find that Sandstone, Marble, Limestone and Granite have tensile strengths around 10 MPa.

I couldn't understand what you meant by breaking length and how you got 150 to 200 km depth. Could you please explain that so I can apply it to the new tensile strength of rocks we just got ?
mfb
Mentor
Insights Author

The breaking length is just a handy conversion tool: it is the maximal length of a cable suspended in a gravity of 10m/s^2 (or 9.81 if you like, I'll use 10 everywhere here) before it breaks. This is just tensile strength divided by density and gravitational acceleration: ##L=\frac{TS}{\rho g}##. Reduce g to 1/20, and L increases by a factor of 20, for steel from 6.5 km to 130 km. You can consider the material around B as an extremely thick "cable" suspended from the material to the left. This "cable" has a diameter that depends on depth, so it is a bit stronger - I approximated this by increasing the number to 150 to 200 km. It is just an order of magnitude estimate anyway.
10 MPa reduces all length scales by a factor of 50, so even your massive block of granite (the Earth is not such a single block) fractures into pieces of a few kilometers length easily long before the short rope breaks.
Hurricane939

Ok great. This is actually why I asked this question, but there is still one thing that confuses me. First of all, let's keep the Earth gravitational acceleration at 10 m/s2 as you said.

The thing that confuses me is what "g" I should use in the breaking length.
For example, if we have tidal gravity of 10.5 m/s2 between core and surface, then everything at the surface has a gravity of 10.5 - 10 = 0.5 m/s2 away from the Earth.
Now, if I want to calculate the length of the rock column that should break due to this tidal gravity difference, should I use g = 0.5 m/s2 in the breaking length equation, OR "g" must be less because the the difference in gravity is between the surface and core and NOT between the begining and end of the rock column ?
mfb
Mentor
Insights Author

Ah, that's a detail I forgot to mention. Tidal gravity is approximately linear with distance, and gravitational force in the same direction is completely linear for a homogeneous sphere. The Earth is not homogeneous, but let's assume it would be. So if you are at 0.9 to Earth radius, you have 0.9 times the tidal acceleration, but also 0.9 times the gravitational force. If tidal gravity wins anywhere, it wins everywhere.

Hurricane939 said:
Now, if I want to calculate the length of the rock column that should break due to this tidal gravity difference, should I use g = 0.5 m/s2 in the breaking length equation

That gives a reasonable approximation, as long as the breaking length is not similar to the size of Earth.
Hurricane939

That's perfect. Let me summarize what I understood and please correct me if there is something wrong.

If, for example, the acceleration of the surface due to the black hole is 20.5 m/s2 and the acceleration of the center due to the black hole is 10 m/s2, then the tidal gravity between core and surface is 10.5 m/s2 and free objects at the surface are being accelerated towards the black hole at 0.5 m/s2.
This would mean that the breaking length (L) = 75 kilometers. So very roughly, we should expect that at these tidal gravity conditions, chunks of rocks the size of 75 km or more should break from the Earth.

Chunks of 7.5 km if the Earth would be a solid piece of rock.
Actually, the chunks could have up to twice that size, then the middle is just at the limit of breaking. A bit more if we assume they are thicker in the middle.

Yea I am by no means trying to get accurate results. I am just try to get a general idea of how large there chunks can be.

Thank you very much for explaining all this.
Hurricane939

Well, the conclusion is that Earth won't reach this point in one piece, unless it is heading very fast towards the black hole.
Hurricane939

There is one last question that came to my mind while thinking about this.

Hmm, good point, breaking up Earth means the different parts accelerate relative to the center of Earth, which reduces tension in those parts. So we get larger chunks.
Hurricane939

mfb said:
Hmm, good point, breaking up Earth means the different parts accelerate relative to the center of Earth, which reduces tension in those parts. So we get larger chunks.

Will this increase be so significant that our used order of magnitude estimation will be meaningless or it is not that significant ?
mfb
Mentor
Insights Author

Now we are back to the same point that is confusing me.
Which tidal gravity difference is causing the breaking, between the surface and center or over the length of the rock column ?

Also, how large will the chunk be in our new case ?
mfb
Mentor
Insights Author

Tidal gravity between material and the center-of-mass motion of whatever object this material is bound to.

Hurricane939 said:
Also, how large will the chunk be in our new case ?

So it's the tidal gravity difference between the 200 km chunk and the center of the Earth that will cause the breaking. Is that correct ?
Log in or register to reply now!

Related Threads on Will this rope break due to the tidal forces or not?

How to measure force due to a tidal wave?

Swing of a hanging rope due to wind

I A climber hanging on a rope versus falling and being caught by the rope -- break strength?