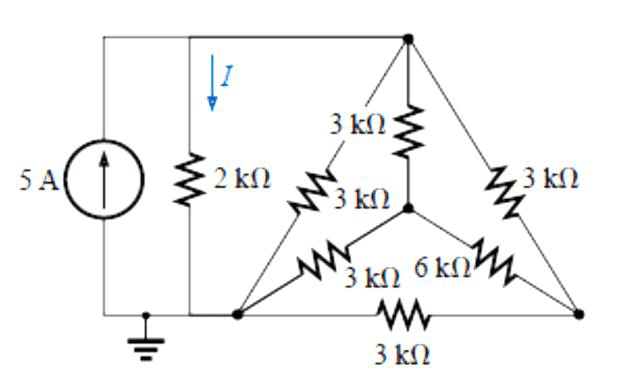 The question asks to find the current I going into the 2k resistor path using Y-delta or delta-Y transformations.

The only problem is I'm not sure if I found the total resistance of the network correctly. It's confusing. Can someone tell me if I did it right?
Last edited: Sep 26, 2013

Right, it is ##1.5\,k\Omega##. It is easy to check - delta-Y network is symmetrical so there is no current through ##6\,k\Omega## resistor and you can get rid of it.
gneill
Mentor

It looks like you managed to find the correct equivalent resistance of the subnetwork, but I'm not sure how you went about it given that you started by transforming the outer Δ to a Y. The reason I say this is because the "new" Y won't have the same central connection as the existing one, nor will it be at the same potential by symmetry (since the existing one has legs 3-6-3, while the new one has legs 1-1-1 all in kΩ). Just looks like a lot of work from that point!

If you'd done the opposite and transformed the existing Y to a Δ, each new resistor would parallel one in the existing Δ, leaving a single Δ with a "wing" that can collapse to a single resistance and it's easy going from there.
gneill
Mentor

szynkasz said:
Right, it is ##1.5\,k\Omega##. It is easy to check - delta-Y network is symmetrical so there is no current through ##6\,k\Omega## resistor and you can get rid of it.

Finding the uncertainty in delta y?