Xnn said:
Excellent! So, the creature could have easily been migrating northward with no initial food stress.

It may have thought there were greener pastures up ahead since it was spring time and just kept on going. Since it was the warm time of year, there was ample water for it to drink on it's trip. However, eventually it may have gotten sick or stuck or something that led to its demise.

Non comprendre, the individual just survived food stress assumingly from the winter, which would not support the migration. Also look at current Siberia, what would it help to migrate X-hunderd km southwards, wintertemperatures out there are not much higher, if not lower than around the Antarctic coast.

Something else about the mammoth mummies in question, with conserved soft tissues, I discussed this extensively with Dick Mol, there is no formal research to the exact causes but all mummies survived the Holocene Thermal Maximum with summer temperatures much higher than today.

Also all mummies thus far, are somehow associated with nearby water. For instance the Jarkov mammoth had waterplants in it's fur. Hence some speculations are possible about the general cause of death and preservation of these mummies.

BTW I think I have a copy of Mol et al 2006 somewhere. Reading that will help.
sylas
Science Advisor

No, and now I am sure of it. The argument you are making does not appear in your references, and the location of the study you have cited is shown with an arrow on the following map. 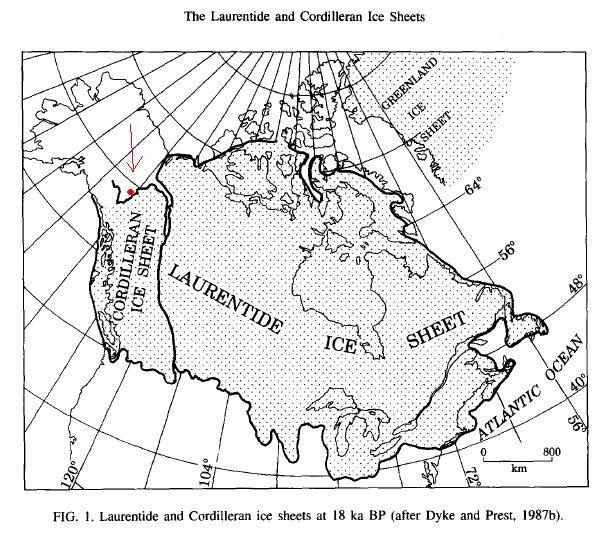 So your study doesn't say anything useful about the volume of the ice sheets, and most certainly places no kind of bound on the time it took for the ice sheets to form. References:

Because there are few suitable dating methods capable of resolving events beyond the radiocarbon limit and because sites that preserve a record of events from the last glaciation are spatially restricted, we consider this synthesis as tentative and subject to significant revision as dating methods improve. Nevertheless, this perspective of the North American ice sheets through the last glaciation demonstrates their complex and dynamic behavior and attendant rapid fluctuations in ice volume.​
The bounds on extent of the ice sheets in North America is quite well constrained. The timing of advance and retreat is less so, and that is why the Clark et al call their synthesis of events tentative. But one thing is certain; the evidence indicates that ice sheets have a complex dynamic behaviour can show rapid fluctuations in volume. From page 80 of Clark et al (1993)

Certainly, development of ice sheets to their full-glacial extent required more time than deglaciation, but within the context of climate forcing-response mechanisms, proxy records indicate that, for shorter intervals, ice-sheet growth was relatively rapid. Ice-sheet development should thus be viewed as a series of "glacial buildup periods" (Andrews and Barry, 1978) when mass balance was positive, modulated by intervals of negative mass balance, culminating in a glacial maximum. Identifying the forcing(s) of these events as well as those at terminations remains a significant problem in climate research (Imbrie et al., 1992, 1993).​
Let's try again. The claim you have made is that there was not enough time to form a large ice sheet with volumes of ice comparable to the Antarctic.

Your approach to this has been to cite various factoids from the normal course of working science, and then draw unwarranted and frankly wild inferences that do not appear in any of your citations and don't follow from the evidence therein. From your posts one would think that these references you are giving actually correspond to a drastic revision of conventional notions of last glacial maximum or ice sheet formation.

In fact, they almost all are PART of conventional science, and completely consistent with the basic story I've given above. There are lots of open questions, and as I have shown previously the total volume of the various ice sheets is known to limited accuracy, but well enough to establish that there's no problem about having enough ice to explain sea level changes, and no problem about a lack of time to form these massive sheets.

PS. I see you've made some edits since I wrote this. I'll take a quick look.

And for Xnn; the citation Andre gave earlier to Hubberten et al (2004) has more on the mammoths. Check it out. I gave a full citation in my previous long summary post on ice sheets. It is a fair conclusion that Mammoths regularly went a long way north in Siberia, even through the last glacial maximum. It is also widely recognized that regional patters of climate in the LGM were a lot different to today. Some regions may indeed have had warmer summers in the LGM than they do today; even while the global average goes strongly the other way.

PPS. Added in edit. I have now looked quickly at your edits to the post I was answering. I am interested that we have now both independently cited Clark 1993!

However, there's still nothing in that or the other papers you've linked that gives any support at all to your personal claims about insufficient time to form the sheet or insufficient ice to exceed what is now in Antarctica.

Just the opposite in fact; they all indicate a large extent for the ice and potential for rapid changes in volume. This is explicit in Clark et al (1993) as I showed in this post already. It's weird. It's like you dump a list of references, but never pay any attention to what the references actually describe.
Last edited by a moderator: May 4, 2017
Xnn

Andre said:
look at current Siberia, what would it help to migrate X-hunderd km southwards, wintertemperatures out there are not much higher, if not lower than around the Antarctic coast.

Mammoths need to eat a lot and they will migrate in search of good food.

If this Mammoths last good meal was a large amount of Larch that was near the treeline, then it would make sense that it would then set off in search of more. However, in this case, it went the wrong way and ended up hundreds of kilometers away.

If there was direct evidence that Larch actually grew in that area 20,000 years ago, it'd be another thing. However, since Mammoths are mobile creatures, it's entirely possible that it died a long distance from where it consumed it's last meal.

Andre said:
Something else about the mammoth mummies in question, with conserved soft tissues, I discussed this extensively with Dick Mol, there is no formal research to the exact causes but all mummies survived the Holocene Thermal Maximum with summer temperatures much higher than today.

So do the mummies in Egypt!

Mummies survive best in dry environments. Just because it was warmer at some time in the past is no guarantee that humidity was high enough to significantly accelerate the breakdown of the remains.
zankaon

zankaon said:
Might we be near the end of a large cyclical regression; not so different from Permian end regression? Statistically might it not seem more likely that we are due to revert at least towards an average of sea level for overall Phanerozoic http://en.wikipedia.org/wiki/Phanerozoic" [Broken], or even a further transgression? Might this be a natural underlying trend, independent of any superimposed anthropomorphic effect? Might we be headed for an Eocene/Paleocene world?

30 million years hence, what might our 'present' stratum (pl: strata) of say 10 million years look like? Might there be any evidence of mankind? For example, if we occupy the middle of such strata, then plus or minus 5 million years. For the past 5 million years, there was no effect. For the future 5 million years, transgression and Yellowstone's Western and Midwest repeated ash fallout would seem to reveal nature's dominant hand. For 200 meter elevation of sea level to less than Cretaceous peak, most of southern U.S. would be inundated, and likewise for eastern coast. The Seaway would flood and enlarge Great Lakes into an inland sea. All coastal cities, and inland lake ports would become reefs initially, and then dissolution. Humanity would would once again be on the move. Therefore, might there be no evidence of mankind's handiwork in such strata (stratum); not even hard plastic cherts? So from a geological perspective, mankind's impact on the environment might be quite negligible, in comparison to nature's broader, deeper, more sustainable ways. Does our myopia greatly underestimate nature's scope and impact, in comparison to that of mankind's? http://en.wikipedia.org/wiki/Sea_level" [Broken]

However if isostatic rebounce works as advertised, then the reduced perssure on the previous ice sheet areas will make them rise while the increased pressure on the ocean floor will make it subside, which would cause a small correction on the actual sealevel rise.
Richard111

Interesting thread, thank you. Sadly I lack the ability to extract the information I think I need and suspect it may be in the energy graphs above. So, if I may, I would like to ask a very hypothetical question:

Assuming current global energy levels are in balance, would it be possible to calculate, as a "forcing", the amount of energy needed to melt 96,983.8 cubic miles of ice and what would be the shortest timescale to achieve this?

Apologies if this is off topic or the wrong thread. The reason I ask is the many predictions of sea level rise being touted in the media. The latest, I read today, claimed the WWF is forecasting a 1 meter sea level rise in the next 10 years.

The ice figure above is my calculation ignoring the extra that would be required to fill low coastal areas. I am also assuming that ice already in the sea is not included. The melt must come from continental ice on Greenland and Antarctica. This also means the melt energy is provided by the atmosphere only.

I attempted to use the following:

I calculated the total energy required and divided by ten to get the annual energy then divided that into the area of the planet to get watts per square meter. Problem is I am not sure I am going about this correctly. Also air melts ice from the top down, there is a limited contact area which I feel would have some effect on slowing down the energy transfer into the ice. How this would effect the timescale is beyond me.

Any thoughts or advice welcome.

Okay then. Here are the results of my calculations. I use the timescale of 10 years as this was the forecast from the WWF.

This equates to a "forcing" of 0.75 watts per square meter. How this energy will be delivered to the ice in the required timescale I have no idea.
Log in or register to reply now!

Related Threads on A Return to Phanerozoic Average Sea Level?

Change of sea level in relation to sea ground
2

New study about the rise in global sea levels
3