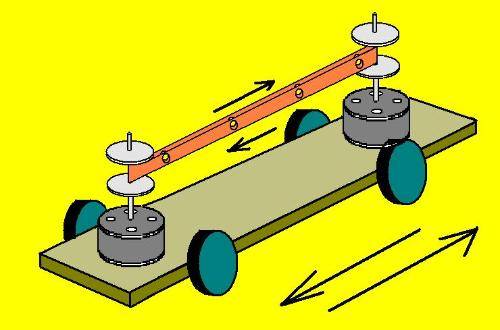 Imagine that a cart is mounted with two electric motors, connected each to a pulley. Between the pulleys is installed a belt of equidistant holes that always coincide at the same points in relation to the cart. This allows the passage of luminous flux.

Like a light interferometer, this phenomenon is (nick)named the "Holemetrics Interference".
What comes into question now is ''the paradox of the cart to roll.''
Believing that the cart is stationary and its engines are fired, the belt will spin. According to the Theory of Relativity, the faster it moves, shorter the distance between their holes, because it will shrink.

The paradox begins when a person and the cart are set in motion with the same direction and speed. For its characteristic semicircular motion, one side of the belt will have its motion added to the cart, while the other will be subtracted. Event that would make one side of the belt to be larger than the other.

Thus, there is no difference if the speed is positive or negative. Remaining understand the interference pattern governed by the meeting of the belt's hole.

This phenomenon is evidenced by the standing waves, so named because they have their 'nodes' and 'antinodes' always occurring in the same places.

In the proposed system, this type of wave is possible because there is another part of the belt going and coming with the same characteristics. For the image shown below, one can clearly see the consequences of the interference generated by the superposition of these waves.

The green wave is heading towards the right. Imagine that the blue wave is the part that made the belt around the pulley and now back in the opposite direction on the left. The result of interference between two waves is given by the yellow wave. 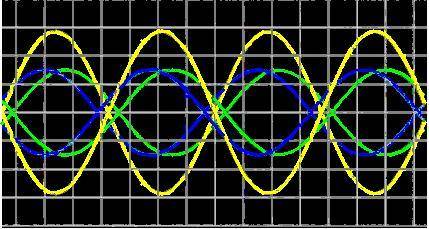 Where is the paradox? What are you asserting is being contradicted?

[edit:] Even before you add a velocity by moving the observer or cart, for the addition effects to be significant the belt also has to have a relativistic scale to its speed. Analyze this first, pick some actual numbers. Then see what happens as seen by both stationary and moving observers.

As a simplifying suggestion, replace the belt of holes with say an even stream of ballistic marbles moving in two directions. See how that transforms under different observer frames.
Last edited: Aug 25, 2011
K^2
Science Advisor

Two problems. First, when the belt gets shorter, what happens to distance between motors? But I suppose, one can imagine that the motors are always running with the same speed, and the belt length is adjusted for that speed. You don't seem to make use of belt speed being variable, so making it fixed isn't a problem.

Second, if the observer is moving with the cart, the two sides of the belt have the same relative speed, so the distance between holes doesn't change. Only the observer standing on the ground would notice the difference, and that doesn't lead to any paradoxes.
rede96

K^2 said:
Two problems. First, when the belt gets shorter, what happens to distance between motors?

This may be a stupid question but would the belt actually be measured as shorter?

If we assume the cart is at rest wrt us, then the belt spans the full distance of the motion being observed. So maybe it is a bit like saying if I see a very long rod moving wrt to me but I can't see either end of the rod, how do I measure its length contraction?

What I would imagine would happen is if we were to place incremental lines on the belt at equal distances, then we would see these lines appear to be closer together. Just like the holes.

This then leads to an interesting question. If I can see 10 holes when the belt is at rest wrt me, then how many holes can I see when it is in motion?
K^2
Science Advisor

The belt would physically contract, pulling the motors together.
rede96

K^2 said:
The belt would physically contract, pulling the motors together.

Right, I guess it is back to the drawing board for me then. I understood length contraction to be a geometrical effect of moving at relativistic speeds though space time. Not something that would physically interact with the properties of the belt.

EDIT: Or is there some other physics I haven't understood that would mean the belt gets shorter the faster it moves?
K^2
Science Advisor

It's a relativistic effect, but the reason you might not have realized that the belt can actually pull things together due to contraction is that you probably did not consider what happens on the particle scale. The belt consists out of atoms. These are held together by electrostatic interactions. Think of what happens to electric field lines due to relativistic motion. That's the source of the force that's pulling on the two motors.
harrylin

K^2 said:
The belt would physically contract, pulling the motors together.

Yes indeed - neglecting other effects.
This one is an interesting variant on the rotating disk, as centrifugal effects only occur at the ends.
jaquecusto

To complete this stage of the mental exercise, take out the trolley system, stabilizing the two engines on the ground with a belt of the largest lenght as possible. 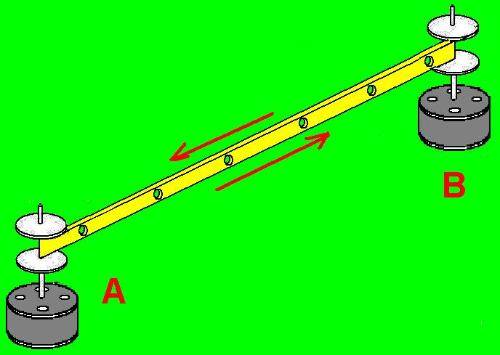 Because the holes match up the same points always, is possible to produce an instantaneous phenomenon along the belt, something not predicted by Einstein's Theory of Relativity. And so, the experiment "confirms" with the Newtonian idea that the time:

"Absolute, true and mathematical time, of itself, and from its own nature, flows equably, without relation to anything external."

After being shown the possibility of coincidence in time and space from a purely mechanical system, the next step of this analysis is to replace the belt system pierced by a LASER gun and a mirror. 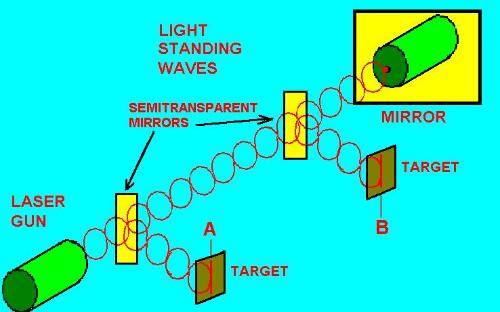 In this situation occurs the phenomenon of formation of standing waves, the interference of light waves that leave the laser gun and the waves reflected by the mirror.

We can be categorical in saying that, just as all the holes in the engine moving belt is coinciding at the same time, the variation of amplitude and phase of each antinode are in perfect synchronization at the entire path of the beam. This phenomenon can be used as a standard of simultaneity of time at any point of LASER path.
Dale
Mentor
Insights Author

jaquecusto said:
Because the holes match up the same points always, is possible to produce an instantaneous phenomenon along the belt, something not predicted by Einstein's Theory of Relativity. And so, the experiment "confirms" with the Newtonian idea that the time:

"Absolute, true and mathematical time, of itself, and from its own nature, flows equably, without relation to anything external."

First, it is not clear what specific measurement you think this experiment could give that would distinguish between Newton and Einstein. You have to analyze the experiment by both theories and determine what number each theory predicts that your device will measure.

Second, you cannot simply propose a hypothetical experiment and by fiat assume that the result would confirm your pet theory. You have to actually do the experiment and see if the measured result agrees with your theory or some alternative theory. For all experiments that have actually been done to date that are capable of distinguishing between Newton and Einstein the data is in, Newton is wrong:

jaquecusto said:
Because the holes match up the same points always, is possible to produce an instantaneous phenomenon along the belt, something not predicted by Einstein's Theory of Relativity. And so, the experiment "confirms" ...

With that, thread closed.

Please read our rules on overly speculative posts.
Log in or register to reply now!

Twins Paradox: The paradox within the paradox

B Twin paradox not a paradox?
3

Paradox within the twin paradox
6

About the Non-paradoxicality of the Twin Paradox