I was reading an article on Acoustic Levitation http://science.howstuffworks.com/acoustic-levitation2.htm and near the end it said

This got me thinking about the character Banshee from X-Men 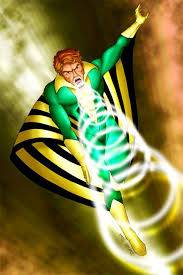 Who's power, as described by the X-Men wikia is

Powers to create powerful sonic waves with his voice with which he can achieve various effects... ability to fly at subsonic speeds by using his voice to propel him through the air.

Now I understand that this is not the same thing as levitation but I was wondering if it was still possible. Assuming that a man does have the physical ability to produce such powerful sounds without injury and with the assistance of a glider suit, could flight be sustained? He is 5'9" (175.26cm) and 170lbs (77.1107kg). Which aspect would be more important to his flight: decibel level or frequency? Would frequency be higher or lower for faster flight at high altitudes? Also if a person was falling from directly above him would his sound be able to slow them down or even stop them without causing them physical harm? What if it was an inanimate object and its well-being did not need to be protected? What level sound would need to be produced in this situation?

I know I'm asking a lot of questions so I don't expect all of them to be answered but it's just something I've been wondering for a while now. Also if you could tell me how you got to your answers that would be great. Thanks!

That is a super-power, so we are thinking in terms of constructing a vehicle of some kind that uses soundwaves for propulsion - preferably a flying machine.

Cannot think of any reason off the top of my head that it is not possible in principle - sound is just a pressure wave after all and you know shock-waves (high amplitude sounds pulses) can move things around and even lift people off their feet.

See:
http://www.engineeringtoolbox.com/sound-pressure-d_711.html
... for a starting point.

Seriously doubt such a machine would fit into a backpack - even with a flight-suit.
It would certainly be illegal to operate one over built-up areas. The SST produces a sonic boom that can shatter windows but does not knock people over ... you are speculating about something much more powerful.
Bobbywhy
Gold Member

You are attempting to mix fictional fantasy stories with real natural science. Levitation of tiny objects is possible for some light-weight objects if they are trapped in an "acoustic standing wave node" (you may Google that phrase). This mechanism does not apply the sort of thrust you are asking about where a human’s voice would generate enough thrust for a man to fly.

Experiment with a powerful acoustic emitter (speaker, for example). Using a sound source and a powerful audio amplifier, energize the speaker. Then hold a flat plate near the speaker’s output. Try to measure the force exerted on that plate. Reverse the measurement: try to measure the recoil force the speaker causes while emitting high power sound. Results in both cases: NONE. Therefore, no human, no matter how loud his voice may be, could propel himself to fly.

Hmm, I'd never thought about. There might be some clever way to do it, but I sure can't think of one. Sound waves are pressure waves. So you get a pressure that moves an object in some direction, but a millisecond or so later you get rarification (reduced pressure) that moves the object in the opposite direction, so it cancels out. If you were moving at the speed of sound then you could "surf" a pressure wave, but if you yourself are producing the sound then it will never catch up to speed-of-sound you.

If there is a lot of thrust coming out of his mouth, why doesn't it blow his head off? Even if it didn't, why doesn't he tumble end over end?

You might have more luck having this sound reduce something's mass. Uh, maybe the frequency is so high it disturbs the strong force in something's atoms. But that would be a lot more likely to cause some ungodly explosion.

I don't see any way to do it.
Log in or register to reply now!

Why is use of the earth's magnetic field not a feasible means of flight?

Flight of a pencil

Could use help before Sunday the 15th

Using Sound to Read Discs, instead of EMRs.

B Reading a Book about Air Sustained Structures...