Could Graphene Become the Next Silicon?

Observation of the Fractional Quantum Hall Effect in Graphene
http://arxiv.org/abs/0910.2763


When electrons are confined in two dimensions and subjected to strong magnetic fields, the Coulomb interactions between them become dominant and can lead to novel states of matter such as fractional quantum Hall liquids. In these liquids electrons linked to magnetic flux quanta form complex composite quasipartices, which are manifested in the quantization of the Hall conductivity as rational fractions of the conductance quantum. The recent experimental discovery of an anomalous integer quantum Hall effect in graphene has opened up a new avenue in the study of correlated 2D electronic systems, in which the interacting electron wavefunctions are those of massless chiral fermions. However, due to the prevailing disorder, graphene has thus far exhibited only weak signatures of correlated electron phenomena, despite concerted experimental efforts and intense theoretical interest. Here, we report the observation of the fractional quantum Hall effect in ultraclean suspended graphene, supporting the existence of strongly correlated electron states in the presence of a magnetic field. In addition, at low carrier density graphene becomes an insulator with an energy gap tunable by magnetic field. These newly discovered quantum states offer the opportunity to study a new state of matter of strongly correlated Dirac fermions in the presence of large magnetic fields.

Long story short, although the integer quantum Hall effect in graphene has been observed, this is the first observation of the fractional effect. Looks like they found states corresponding to a filling fraction v=0.30, v=0.46 and v=0.68. On theoretical grounds these would probably correspond to v=1/3, v=1/2 and v=2/3 respectively. The v=1/3 and v=2/3 are probably correct, the v=1/2 might be false. T

Some background info: the quantum Hall effect is a topological phase where the bulk of the system develops a mobility gap, thus turning it into an insulator. At the sime time the edges develop massless modes, thus allowing for conductance along the edge. The conductivity is quantized in units of v*e^2/h -- v being an integer or a fractional number. The integer effect is triggered by disorder in the system, the fractional effect requires a dominating Coulomb force.
Hans de Vries
Science Advisor
Gold Member


EETimes said:
A 100-GHz transistor has been demonstrated by IBM Research. Fabricated on new 2-inch graphene wafers and operating at room temperature, the RF graphene transistors are said to beat the speeds of all but the fastest GaAs transistors, paving the way to commercialization of high-speed, carbon-based electronics

Especially with this new development


Physicists Discover How to Grow Graphene
The discovery of a way to grow graphene should make possible the widespread manufacture of graphene-based electronics.

It's basically a new to grow graphene on top of a silicon layer.
Last edited: Feb 5, 2010
GluonZ

I haven't read much about graphene in a while and have just started skimming through some of the recent links in this thread, but has there been any significant developments in engineering a band gap in graphene? I know GNRs were showing promise at one point.
Last edited: Feb 5, 2010
Hans de Vries
Science Advisor
Gold Member


EETimes said:
Carbon semiconductors fashioned from pure crystalline sheets of graphene outperform silicon but have lacked a foolproof method for creating the p- and n-type devices required for complementary metal-oxide semiconductor (CMOS) transistors. Now the Georgia Institute of Technology claims to have a devised a one-step graphene doping process, paving the way for commercial fabrication.


EETimes said:
The ability to dope with holes (p-type) or with electrons (n-type) from a single dopant material could enable carbon-based CMOS transistors to be fabricated more quickly than silicon transistors. The polymer material, hydrogen silsesquioxane (HSQ), can also be used to increase the conductivity of the graphene ribbons used for interconnections by exposing them to a plasma source.

GluonZ said:
I haven't read much about graphene in a while and have just started skimming through some of the recent links in this thread, but has there been any significant developments in engineering a band gap in graphene? I know GNRs were showing promise at one point.

To my knowledge, GNRs are a good way to engineer the band gap. Also, Feng Wang's group in Berkeley demonstrated band gap tuning with a gate field last year[1].

I haven't seen anything yet. "Racetrack memories" are a sort of revival of the
once very promising "Bubble memories" for instance made by Intel with some
commercial succes.

Well..., even Graphene's magnetic properties can be extra-ordinary it seems...

"In effect, the spin-valve developed by our team permits the graphene nanoribbons to exhibit colossal magnetoresistance properties," the scientist said.

The POSTECH professor said tests have shown that the efficiency level of the magnetoresistance of graphene nanoribbons reaches into the million-percent range, compared to few hundred percent for devices created in the past.

Hans de Vries said:
I haven't seen anything yet. "Racetrack memories" are a sort of revival of the
once very promising "Bubble memories" for instance made by Intel with some
commercial succes.

Well..., even Graphene's magnetic properties can be extra-ordinary it seems...

I knew you'd come through! Thanks very much Hans, I'll read up on this.
Hans de Vries
Science Advisor
Gold Member


www.semiconductor.net said:
A simple one-step process that produces both n- and p-type doping of
large area graphene surfaces may facilitate its use for future electronic
devices. The technique can also increase conductivity in graphene nano-
ribbons used for interconnects.

Regards, Hans
Last edited by a moderator: May 4, 2017
Frame Dragger

Holy explative deleted. You can't turn your back on computer science for a second. I can't believe they managed to alter the doping just through exposure time, which is an improvement on some vapour deposition methods for non Graphene materials.

It's not often you see a leap towards practicality going hand in hand with success.
Last edited by a moderator: May 4, 2017
sanman

Good time to be alive, when the topic of the thread evolves AHEAD of the discussion! That is very good news; mass production is a key hurdle for any new material.
Hans de Vries
Science Advisor
Gold Member

www.semiconductor.net said:
Researchers in the Electro-Optics Center (EOC) Materials Division at Pennsylvania
State University have produced 100 mm diameter graphene wafers, a development
considered to be a critical milestone in the development of graphene for high-
frequency electronic devices

Regards, Hans
Last edited by a moderator: May 4, 2017
Frame Dragger

It looks as though for connections at least, graphene has a mid-near term bright future. Maybe mid-long term as an actual replacement for Si... wow.
Last edited by a moderator: May 4, 2017
sanman

Yes, graphene will probably show up in interconnects before showing up on chips themselves.

The first graphene transistors will be for RF communication.


EETimes said:
To achieve the world's first optical data link using graphene, IBM fabricated an asymetrical metal-graphene-metal FET that used palladium and titanium as the source and drain electrodes, respectively, and graphene as the channel. Photons hitting the graphene create electron-hole pairs which would ordinarily recombine in the absence of a strong electric field, but are prevented from doing so by the interdigitated source and drain which intensifies the built-in potential profile of the different metals within the channel.

Now that would truly be amazing!
Frame Dragger

Now that would truly be amazing!

I don't believe it can, without materials or other science beyond current abilities. Then again, maybe they found some amazing material to dope it with (they mention that in the abstract) and they can make the leap to manfucaturing? The idea of doped carbon as a room temp superconductor that could be reasonably manufactured would be a true leap forward, and one I never expected to see in my lifetime.

That said, Hans' post about a Graphene photodetector almost had me weeping for joy. The more uses that this material can be purposed for, and the easier it is to manufacture, the sooner we'll have it in our computers.

I still think interconnects first as you said sanman... maybe optical links? It might not be a superconductor, but I'd take it! Besides, I'm tired of the occasional computer frying and then getting a whiff of Silane gas... which is truly wretched stuff. :rofl:
sanman

translation: there's gold in that graphene!

Here's a theoretical work on band gap engineering by in plane deformation.

The new technique has been used to fabricate an array of 10,000
top-gated graphene transistors 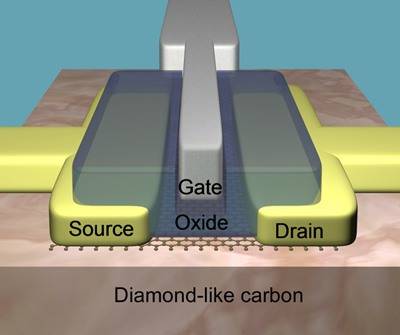 Some links to previous work of the group:

. . . In the Science paper, the I.B.M. researchers describe a demonstration in which they deposited several layers of graphene on a silicon wafer, then created circuits based on graphene transistors and components known as inductors. They demonstrated frequency mixing up to speeds of 10 gigahertz.

In the past I.B.M. has created stand-alone graphene transistors, but not complete electronic circuits.
. . . .

Related Threads on Could Graphene Become the Next Silicon?

B In theory, could any element become unstable?

Why is graphene the way it is ?