Determine the coefficient of performance of this cycle

In an ideal refrigeration cycle, the temperature of the condensing vapour is 40oC and the temperature during evaporation is -20oC. Determine the coefficient of performance of this cycle for the working fluids; R12 and ammonia.

Carnot tells what is the best possibly achievable
i think your question, why does the refrigerant make a difference
lies in the Molier charts for real refrigerants
here's more than any mortal could want to know
https://www.downloads.siemens.com/download-center/Download.aspx?pos=download&fct=getasset&id1=8359 [Broken]

this looks like a good worked out example
http://www.saylor.org/site/wp-content/uploads/2013/08/BolesLectureNotesThermodynamicsChapter10.pdf
see example 10-1 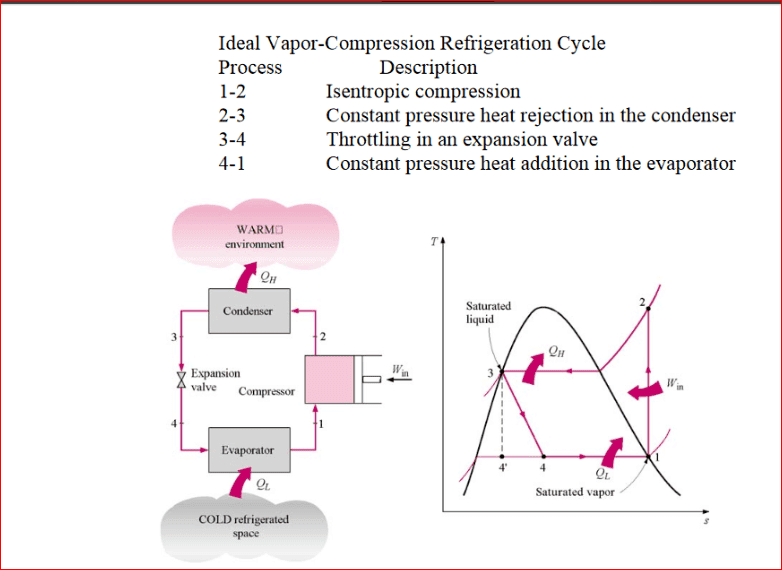 Thanks you for the helpful material you attached.
From the second attachment I concluded that COPR=(h1-h4)/(h2-h1) so I was able to get h1 from the tables at -20οC. for R12 h1=178.73 and similarly I got h2=74.59. However,I don't know the temperature at 3 or 4 so I can't get h4. What should I do?
SteamKing
Staff Emeritus
Science Advisor
Homework Helper

The temperature at 4 is going to be the same TL as in the ideal Carnot cycle.

Do like Jim suggests, and look at the worked example he attached in Post #2.
jim hardy
Science Advisor
Gold Member
Dearly Missed

1. Go back to original question

Ideal cycle, eh ?
That's what is represented in the T-S diagram above,
Think about it
working fluid enters evaporator as liquid-vapor mix at saturation pressure and leaves as saturated vapor at same pressure, as stated by phrase "4-1 constant pressure heat addition" and as shown by proximity to saturation line on the T-S diagram ...
that sounds to me like constant temperature
What do you think from looking at the chart ?

in their ideal cycle chart they don't show any superheat so i'd assume saturation temperature on both ends of the evaporator, just different quality.
Isn't that what is the "x" is here , fraction of vapor ? 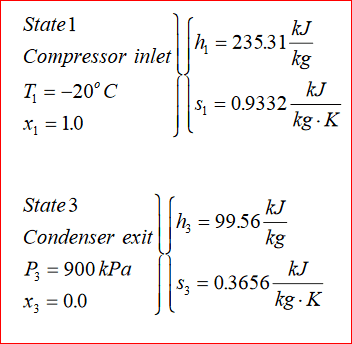 It is helpful to remember refrigerators work by heat of vaporization
and imagine yourself inside a tiny submarine riding along through the pipes
I think that'll help you visualize .

4. Print yourself several copies of that T-S chart and think your way around the circuit,
writing on each segment your own words about what is going on. When you get the words boiled down to a concise summary and it "feels right" you will feel an upwelling sense of accomplishment. Probably you'll improve on it after a night's sleep.


Just a couple days ago i charged a friend's car airconditioner.
When they're low on freon they can't liquefy in the condenser
so no liquid enters the evaporator
meaning there can't be much absorbtion of heat in the evaporator because there's no vaporization going on in there anymore
and the air comes out of the dashboard vents warm. Point 1 is in superheat.
It is enlightening to feel the air get cooler as the compressor's suction pressure comes up , which is counterintuitive ...
but what's happening is it's coming out of superheat and is approaching saturation pressure for the cabin air temperature.

We learn more by doing than by reading about doing
$49 buys a set of inexpensive refrigeration gages for your car
and summer is just around the corner...
You'll quickly observe that the compressor discharge line is the hottest point in the system
and you'll get a visceral "feel" for the power of evaporation .
Not to mention you'll gain sudden popularity....

Related Threads on Determine the coefficient of performance of this cycle

Problem on Second Law of Thermodynamics

A
2nd Law of Thermodynamics