Direction of car friction in a free-body 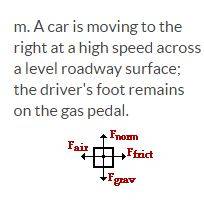 All I want to know is why the direction of friction is forward. My only guesses are that the wheels are turning backward creating forward motion (what?)

In general, the (positive) direction of the frictional force of a surface on an object rolling over it cannot be determined without knowing whether the rolling object is "trying to slide" over the surface or trying to "trying to spin without moving". Determing the positive direction depends on the specifics of other applied forces and moment of inertia. In this problem, since the surface is flat, the wheels would spin without moving if there were no friction. The frictional force can be drawn so it opposes the motion of the surface of a tire attempting to spin across it. Theoretically, It doesn't really matter how you pick the positive direction for drawing force vectors. If you draw them pointing the wrong way, you get a negative value for their magnitude and you conclude they point in the opposite direction.
haruspex
Science Advisor
Homework Helper
Insights Author
Gold Member

To add to Stephen's comments, "friction opposes motion" is a common misconception. Friction opposes relative motion of the surfaces in contact. For a car accelerating on the flat or moving at a steady speed uphill, friction acts in the forward direction (to prevent the tyres slipping on the road). Unfortunately, many problem setters who ought to know better refer to a car working against friction when they mean rolling resistance: energy losses mostly in tyre deformation.
Share:
Share

Related Threads on Direction of car friction in a free-body

Direction of friction in the circular motion of a car

I
Car in motion

Friction in a Car Engine

H
Friction problem of a car