I used the Aufbau Principle 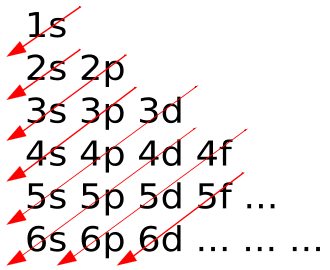 1. I can see that Ag is an exception to the rule, but are there any generalizations I can make so that I don't write down the wrong configurations just because of an exception?

2. Also, is it traditional to write these in order of increasing quantum number (just like it's written above), because the Aufbau Principle is meant for the orbitals to be filled in increasing energy?

1.) In case of configuration like (n-1)d4 ns2 OR (n-1)d9 ns2, to attain a more stable configuration, the electron from s orbital jumps to the previous d orbital. So, the new configuration becomes (n-1)d5 ns1 and (n-1)d10 ns1 respectively.

This phenomenon is called pseudo-inert effect, and according to this, half filled or fully filled orbitals cluster (like 2p, 3d orbitals) are more stable, and if this is attainable by one electron jump, most atoms are ready to do so. Example are Chromium Group (Group 6) and Copper Series (Group 11).

2) It is OK if they clubbed the orbitals on the basis of their respective Principle Quantum number or by Aufbau's Principle, as long as it do not look absurd. But conventionally, people fill the orbitals with increasing Principle Quantum number, rather than by the diagram. Diagram is useful for allotting electrons, but writing configuration that way may seem confusing.
eurekameh

Probably owing to the fact that s orbital is a single orbital, one can half-fill it and second can fully. Moreover, p and d orbitals are clusters of 3 and 5 orbitals respectively, so they are stable if each orbital possesses equal amount of electron.
JohnRC

This question (original post) is uncovering a lot of grey areas and textbook misinformation and misunderstandings in the area of atomic structure. I will address several of these:

Thus the electron configuration of neodymium is written either

The electronic structure of silver is written

Second, "Aufbau" is not the name of a German physicist. It is actually a German word, that does not have an exact English equivalent. It describes the process of building up something piece by piece on the foundation of the simpler structure that has been arrived at by placement of the previous piece. Like the process of building up a brick wall by placing bricks in the structure one at a time. The Aufbau principle (never "Aufbau's principle") refers to obtaining the electron configuration for nitrogen by looking at the previous element C: 1s22s22p2, and saying "nitrogen needs an extra electron. Where can we put it?" to arrive at N: 1s22s22p3.

Third, it is not the case that the periodic table groups elements with similar valence electron configuration. The classic example is in group 10, which contains
Ni: {Ar} 3d84s2
Pd: {Kr} 4d10
Pt: {Xe} 5d96s1

General electronic configuration of the d and f block elements

What is the configuration (R or S) of these molecules?

Is this a good alternative definition of electron affinity?

What is Kr2+ electron configuration?