Equilibrium of Rigid Bodies. Rafter. What is moment arm?

Two uniform 150 N rafters rest on frictionless floor, held together by a rope. A 500 N load is held at their apex. Find tension in the tie rope. 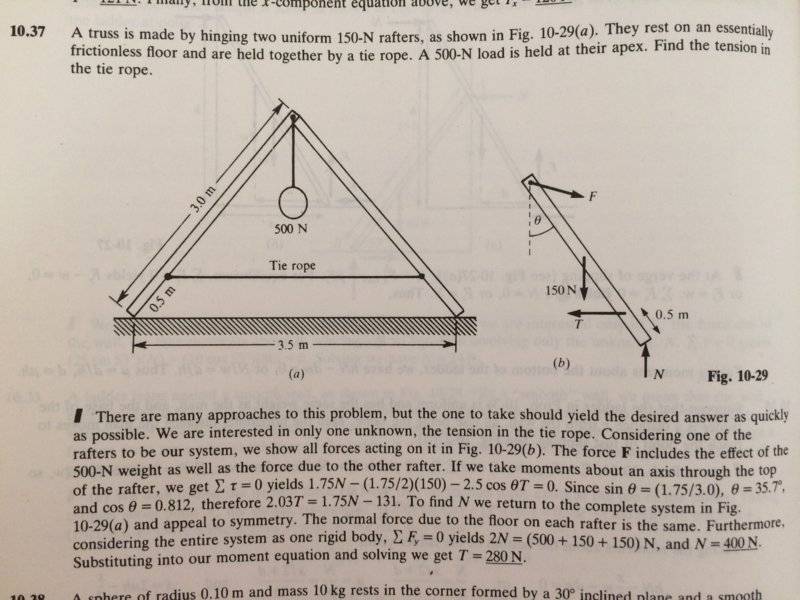 Is my equation completely wrong? There are 2 problems I have:

I realize later that the key chooses the axis to be the top of the rafter instead of bottom like me, which eliminates the uncertainty of the force I mention above, which would have been smarter. Would it be possible though to solve the problem if I had done it my way?

2. The moment arm. Would this two diagrams represent the same moment arm (they are definitely not the same length though)? 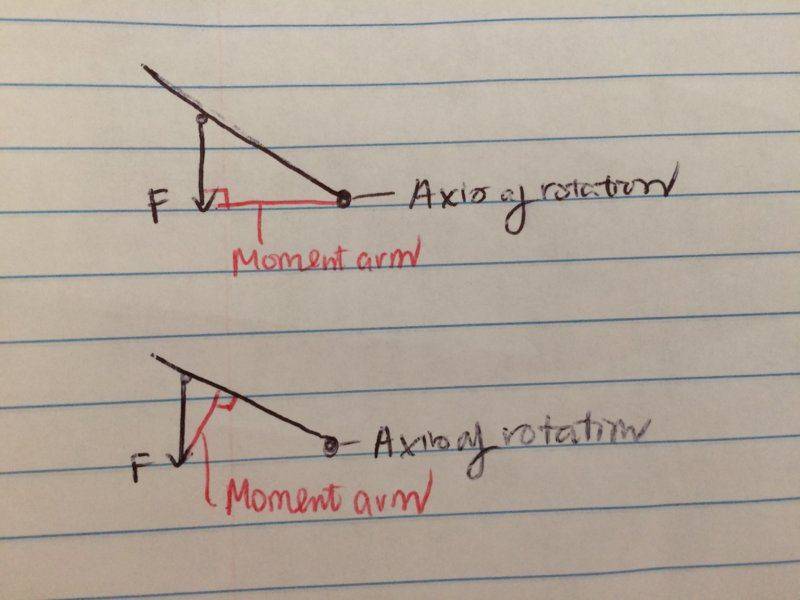 Is the moment arm the same as the verticle component of a force to the arm?

However, in the upper diagram, the moment arm is drawn starting from the axis of rotation and perpendicular to the force. In this way, I have a hard time imagine whether moment arm is pointing clockwise or counterclockwise, and as such whether to make the moment arm negative or positive in an equation. Which way should I draw the moment arm?

Also lever arm is the same as moment arm right?

Thank you so much!

Beth N said:
Why does it not point straight along that rafter or perpendicular to the rafter doing the force?

Because, as the text states, it consists of the horizontal reaction from the other rafter plus a half share of the suspended weight. In your attempt, you would do better to keep those two components separate. You will need a force balance equation to find the reaction force between the rafters.

No. The moment arm is the perpendicular distance (hence the shortest distance) from the axis to the line of action of the force.

Beth N said:
Is the moment arm the same as the verticle component of a force to the arm?

No, the moment arm is a distance; a component of a force is a force.

Beth N said:
drawing a line perpendicular to the arm

That rather reveals the error. You are thinking of the arm as perpendicular to... the arm?!

Related Threads on Equilibrium of Rigid Bodies. Rafter. What is moment arm?

How to find Tb and Moments 3D equilibrium of rigid bodies

Equilibrium of a Rigid Body

Equilibrium of a Rigid Body

Equilibrium of A Rigid Body

Equilibrium of a rigid body