The term “moment” is used in various ways in Physics and Mathematics:

In vectors, if the force vector is F, and r is the vector from Q to P then the moment is the vector r×F. (Note that the order is important, but the precise point P is not; it can be anywhere in the line of action.)

In terms of scalars, there are three ways we can say this:

If ##r## is given in terms of perpendicular co-ordinates, it may be more convenient to resolve the force into corresponding perpendicular forces and find the moment from each separately. 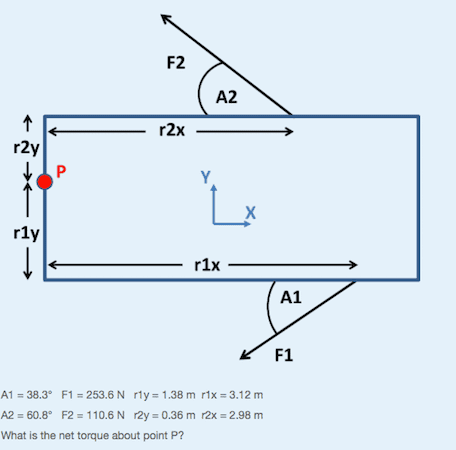 Tip: If there are forces involved that are neither known nor required in the answer, by taking moments about the point where their lines of action intersect you may be able to simplify the working.

Example 1: “A uniform beam weight W length 2L rests on supports A and B, at a distance a from the left end and B from the right end respectively. What is the normal force the beam exerts at A?”
We could look at the vertical force balance

and take moments about anywhere, e.g. at the left end of the beam:

and solve. But since we only wish to find ##N_A##, we can get there with one equation, taking moments about B:

Example 2: “A uniform solid ball starts with speed v, not rotating, along a horizontal floor. The coefficient of kinetic friction between ball and floor is ##\mu_k##. What is the linear speed of the ball when it commences rolling?”

Since friction acts along the floor, we can obviate the need to determine the frictional force by taking moments about a point in the path on the floor. The initial angular momentum of the ball about the point is ##mvr##.

By the parallel axis theorem, the moment of inertia of the rolling ball about its point of contact with the floor is ##I_{CoM}+mr^2 = \frac 75 mr^2##. If the final linear speed is u then the final angular momentum of the ball about the point is ##\frac 75 mr^2\frac ur= \frac 75 mur##.

A couple is a pair of forces acting on a body that is equal and opposite as vectors but with different lines of action. There is no net force, but there is a net torque.

In this case, only, the torque is the same about every point.

Such a torque is sometimes referred to as a screw; others use ‘couple’ to mean either a pair of forces or their net torque.

A system of forces in two dimensions can be fully represented by either a single force (their vector sum, with a suitable line of action) or a screw.

Repeating this procedure, we can reduce any system to only parallel forces.

The line of action of the equivalent single force is such that if you pick a point in it then the pair ##\vec{F_1}, \vec{F_2}## has no net moment about that point. Its distances from the other two lines of action are in inverse proportion to the magnitudes of the forces.

Repeating this procedure, we can reduce any system of parallel forces to either a single force or a pair of parallel equal and opposite forces (a screw).

In three dimensions, any system of forces acting on a body can be represented by a single force plus a screw parallel to the force.

Some confusion may arise regarding the directions forces act at joints.

At a freely rotating joint in a static arrangement, there is no torque exerted, but the reaction force can be in any direction.

“In the diagram, angle ADB=angle BDA=30 degrees.  Links CD and BC are considered massless.  ADO+wheel has weight W and mass center G.

Write out the force equations on ADO, taking moments about A.” 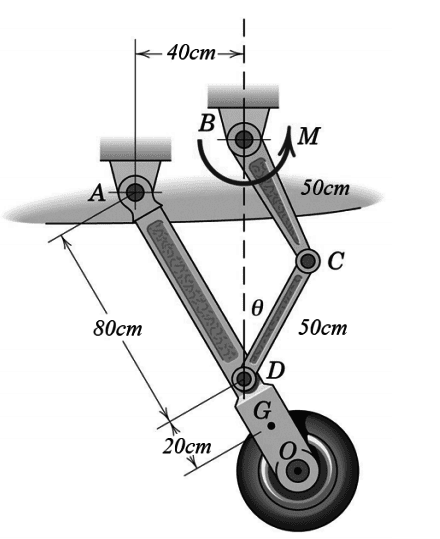 The force on AD at joint A need not be purely along AD.  Indeed, it cannot be.  Taking moments about D, W has a clockwise moment.  This must be balanced by a moment from the force at A.

On the other hand, because CD is considered massless, the force CD exerts at D and C is along CD.

In a more complicated arrangement, a single rigid strut may have several joints.  At each joint, the forces at the other joints have balancing moments.

In applying the torque/angular acceleration equation ##\vec F\times \vec s = \tau = I\vec{\alpha}##, or the law of conservation of angular momentum, the reference point for taking moments should normally be fixed relative to an inertial frame.  But other choices can be valid.

If we now allow the reference point an acceleration ##\vec a##,

Each of the following is valid, for example:

Example: “A uniform rod length 2L, mass M, lying on a smooth table is struck perpendicularly at one end by a clay lump mass m moving at speed u. The clay adheres to the stick. Find the angular speed of the rod just after impact.”

Let the angular speed after impact be ##\omega## and the linear speed of the mass center of the rod be v.

Sign convention: clay hits the right-hand end of the rod from its perspective, rotation to the left is positive.

X “If the moment of inertia of a body mass M about a given axis is I, then its MoI about a parallel axis distance a from the first is ##I+Ma^2##”

✓ “If the moment of inertia of a body mass M about a given axis through its mass center is I, then its moment about a parallel axis distance a from the first is ##I+Ma^2##”

Frequently Made Errors in Equation Handling

An Example of Servo-Constraints in Mechanics
7 replies