What is the escape velocity on that planet? What is the rms speed of the oxygen molecules on the surface of the planet?

Now read the questions carefully. You know that the rms speed is an average, so there are molecules with much higher and much lower speeds.

These are the questions of the problem. Are they true or false?

The question 'Is there O2 on the planet" can not be answered. It depends on the previous history of the planet and its chemical structure. Maybe, all oxygen is bound in the material of the rocks and that was the reason that it disappeared from the atmosphere.
Last edited: Jan 21, 2015
BvU
Science Advisor
Homework Helper

Thanks, Suraj, for re-posting.

This thread was (accidentally?) deleted yesterday, after Suraj had already found that the escape velocity is the same as on earth if M/r is the same. We didn't do much with the temperature yet, so there might be something to look at in the speed distribution.

Then one of the non-physics issues we had difficulty with yesterday was the formulation of the exercise:
"Among the following choose the wrong statement (A) (B) (C) (D)" (for which see above, or in the picture)

And we ended up with mixed feelings (is this physics or boolean logic ? and such)

Suraj has added "but the book and my teacher says that the planet does not have O₂ how?? "

To me both the physics and the logic are still riddled with mystery, so I'm surprised at the determined "no O2" outcome: ehild's conclusion is of course much better ! (a belated happy birthday, ehild!)

ohh ok then forgetting about the options given we can say .. the atmosphere will have O₂ (not considering other possiblities as ehild suggested)
BvU
Science Advisor
Homework Helper

No we can't. The conclusion "the atmosphere will have O₂" requires many more conditions to be fulfilled.

All we can say is that the average magnitude of the O2 molecule speed in a give direction is much smaller than the escape velocity. So on that basis we haven't excluded the presence of O2.

We haven't looked at the (temperature dependent) distribution of the speeds yet, only at the average. If there is a long tail, O2 might escape in the long run. (My first impression: no. the 800 K isn't that high -- please correct me if wrong)
Suraj M
Gold Member

this is what my text book says 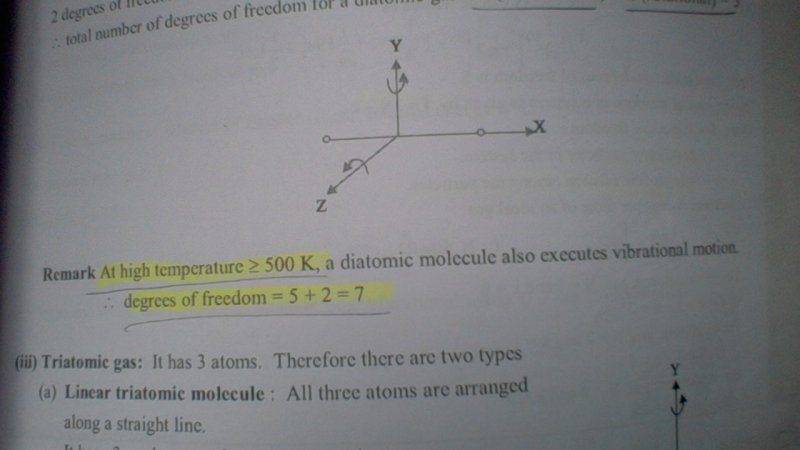 Not really. The five degrees of freedom you now use (3 for translation, 2 for rotation, I suppose) have the energies equally distributed, so for one direction (upward) there still is only ##{1\over 2} kT## available.

BvU said:
Not really. The five degrees of freedom you now use (3 for translation, 2 for rotation, I suppose) have the energies equally distributed, so for one direction (upward) there still is only ##{1\over 2} kT## available.

ok wait... sorry but why only 1 direction?...as i asked you yesterday ...anything other than downward right? because
when we derive the ve equation ..we use kinetic energy of the particle and hence no direction...so again here we shouldn't need to consider just 1 direction right?
BvU
Science Advisor
Homework Helper

Only the radial component of the velocity helps in getting away from a planet into space.

BvU said:
Only the radial component of the velocity helps in getting away from a planet into space.

Remember you used ##-{GM\over r}## for the potential energy ?

ok so consider that we are able to launch a bullet parallel to the earth at 11.2km/s then the bullet wouldn't escape? it would wouldn't it?
ehild
Homework Helper

It would escape:) only the form of its trajectory will differ. It will go along a parabola instead of a straight line.
Suraj M
Gold Member

ahh!! so we should be taking kT and not ½kT #BvU
right?
ehild
Homework Helper

About half the molecules on the surface have velocities with radial component away from the planet. These can escape in principle. The direction of the velocity does not influence the energy distribution.
Quantum Defect
Homework Helper
Gold Member

ehild said:
The two-atomic molecules have 3 translational degrees of freedom, the other two are rotational. Only the translational energy helps the molecule escape from the planet. You have 0.5 kT energy for each degree of freedom, the average translational energy is 3/2 kT=1/2 mv2. At 800 K, I guess it corresponds to about 800 m/s speed, far below the escape speed. In principle there is some finite probability that a molecule reaches the escape velocity, although very low.

About half the molecules on the surface have velocities with radial component away from the planet. These can escape in principle. The direction of the velocity does not influence the energy distribution.


As I noted yesterday, the whole question: "Does this planet have oxygen?" is kind of odd. The multiple-choice question at the beginning is strange enough. As BvU has noted it would seem that there are multiple choices that must be incorrect (the question is asking which statement is incorrect.)

Some other things to note. Oxygen is a reactive gas. To early life on this earth it was a nasty, toxic poison. If the earth were truly at equilibrium, we would have all of our oxygen turned into oxidized forms of other compounds: carbon dioxide, carbonates, nitrates, etc. The fact that we live in an oxidizing atmosphere has to do with the fact that oxygen is being constantly replenished by plants. Oxygen also absorbs ultraviolet light to form ozone, and other things. Do we know anything about the radiation coming onto the planet? What kind of star is it orbiting? Are there natural processes for formation of oxygen? So many questions...

It seems that if you are asking a question about whether a planet has oxygen present on it would require that you have knowledge about the composition of the planet, how much oxygen was "initially" present and the rates for the loss of oxygen due to chemical processes as well as due to physical processes. To calculate a rate of loss due to escape, you would need to know something about the structure of the atmosphere. If it is anything like our own atmosphere, escape to space will only happen in the upper layers of the atmosphere where the mean free path is long enough to allow escape. What is the chemical composition of the upper layer? What is this layer's temperature? [Earth's atmospheric temperature profile is complex going through several minima and maxima]

The presence/absence of oxygen on a planet requires knowing soooooo much about sooooo many things on this planet.

Given the reactivity of oxygen, if you landed on a planet and detected oxygen in the atmosphere I would bet big money that there are natural processes that are working to keep this highly reactive gas at some steady-state concentration that you were able to measure.