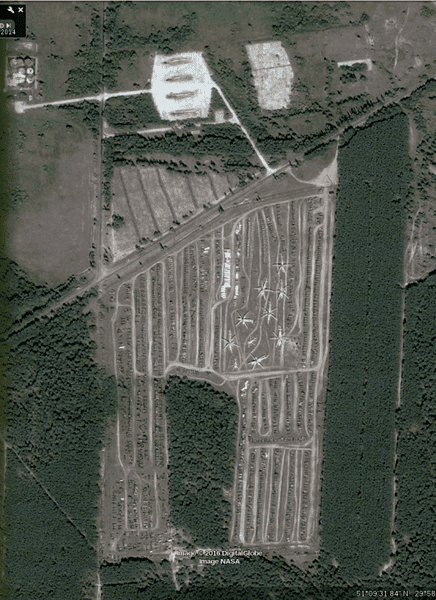 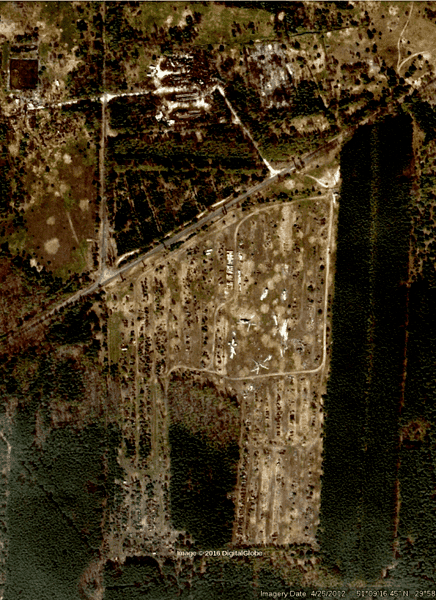 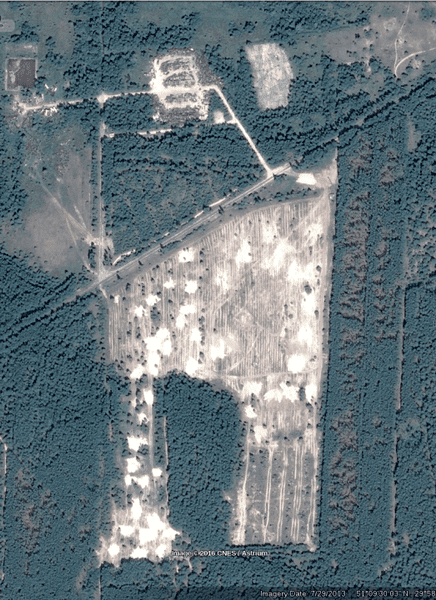 Yes, you see it right. Our former president's gang stole and sold even *radioactive* steel.

The steel itself is not radioactive even if fission isotopes have been dispersed on it, and those isotopes can be seperated, mostly with detergents if someone takes the trouble. Also, what source indicates the vehicles have been sold into the steel market as opposed to being sequestered somewhere?
Last edited: May 16, 2016
nikkkom
Insights Author

what source indicates the vehicles have been sold into the steel market as opposed to being sequestered somewhere?

Common sense. The only plausible reason the vehicles aren't there anymore is that someone found a way to make money selling them.
jim hardy
Science Advisor
Gold Member
Dearly Missed

At 500% enlargement it looks more like somebody has edited them out.
Copy and paste into paint. 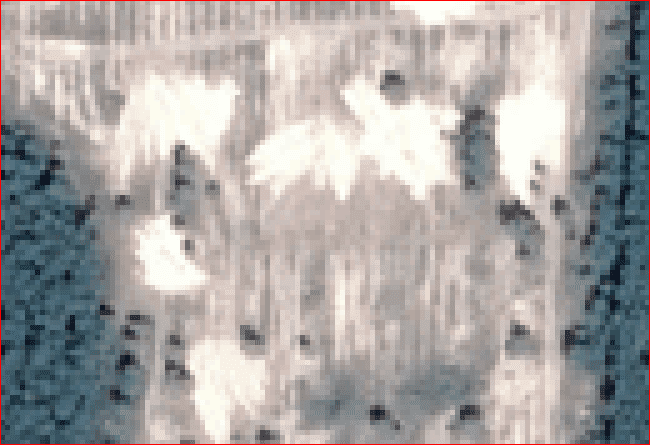 However if it did happen it won't be the first time
http://www.orau.org/PTP/collection/accidents/pipefitting.htm 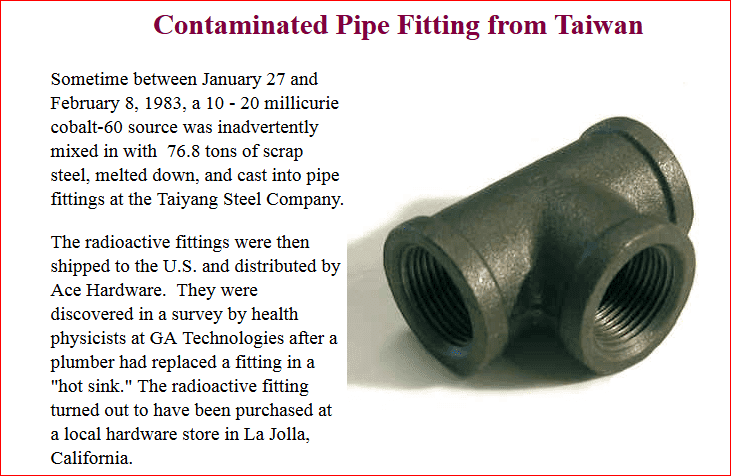 jim hardy said:
At 500% enlargement it looks more like somebody has edited them out.

I think it's just sand. The entire area has sandy soils (this also explains why local forests are predominantly pines, pines grow well on such soils). Here is another photo from that area. 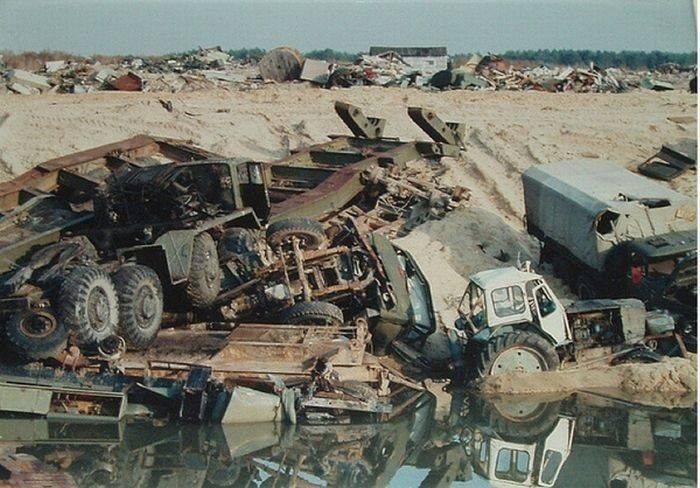 nikkkom said:
Common sense. The only plausible reason the vehicles aren't there anymore is that someone found a way to make money selling them.

Not at all. Much of the fuel-containing materials (FCM) were eventually removed from reactor 4, and the reactor site enclosed. This wasn't all done because a way was found to make money selling off contaminated material. Maybe somebody has indeed spirited those vehicles into the scrap metal market, and maybe they've been buried/cleaned by the same kind of people that responsibly sealed the reactor cite.
jim hardy
Science Advisor
Gold Member
Dearly Missed

Okay, It's possible i'm seeing where a bulldozer has covered up the junk with white sand
but you have to admit it sure looks like brush strokes retouching the painting, turning the junkpiles white and featureless.

jim hardy said:
but you have to admit it sure looks like brush strokes retouching the painting, turning the junkpiles white and featureless.

By searching the web, I find numerous testimonies that the place really is empty now. It's not a doctored map.


Where'd you find the pictures ?

I made them myself: screenshots of Google Earth. GE has an option to see older maps (View->Historical Imagery).
nikkkom
Insights Author

mheslep said:
Maybe somebody has indeed spirited those vehicles into the scrap metal market, and maybe they've been buried/cleaned by the same kind of people that responsibly sealed the reactor cite.

Open Google Maps and find Chernobyl Zone. See those numerous rectangular-looking gaping holes all over the forest? Must be someone "responsibly cut down and sealed hundreds of square kilometers of contaminated wood" :D :D :D

As to the pipe fitting, it seems more likely to me something was mixed into the casting process. I was on a radioactive decontamination team in the US military, and we were also told hot high pressure water, detergents and elbow grease were effective for removing the contaminants from surfaces; but if the Chernobyl zone steel wasn't decontaminated, and was simply carted off for scrap it could have borne anything into the smelter.

Incidentally, the Chernobyl accident happened when I was stationed in Alaska, where we were always prepared for nuclear attack since bio and chem weapons don't work as well in freezing boreal and arctic environments; but after the Exxon Valdez oil spill all of our Mil-spec hot water pressure washers were carted away to the beaches of Prince William Sound to help with the cleanup effort.
the_emi_guy

I can confirm OP's observation. Just go to Google Earth and search "Chernobyl vehicle graveyard", it takes you right there. Looks like they are either removing, or backfilling a lot of dirt. A lot more white patches are visible now compared to OP's 2013 image. This may indicate some sort of remediation vs. something more nefarious.
Last edited: May 17, 2016
nikkkom
Insights Author

I guess/hope they sandblasted or at least washed the vehicles before removing them. This washing operation might have created sandy areas cleared of vegetation.
jim hardy
Science Advisor
Gold Member
Dearly Missed

johnnyrev said:
As to the pipe fitting, it seems more likely to me something was mixed into the casting process.

Well nikkkom , knowing how things happen in East and somewhat also in eastern Europe , I wouldn't be surprised if someone really took those metals and wood without properly cleaning or inspecting contamination.Although to say "former presidents gang" seems a bit troll like to me.first of all individuals and all kinds of homeless folks have been dismantling and stealing Chernobyl site metal for years , the scrapyard radioactive cars started missing engines and body parts well before anyone was able to use google maps to see what happens there.Also I know for a fact that corruption in Ukraine like in other former USSR countries is on so many levels that the president doesn't probably even know anything about what goes on in Chernobyl.
Also I don't think corruption has decreased much just because Poroshenko is in charge now , he himself has some cloudy finances.

Maybe this is an oversimplification on my part I'm not sure but quite frankly i'm not so scared because someone cut down some trees that were in the exclusion zone ,remember that not all the trees there are contaminated or highly radioactive, also not even for the contaminated cars because along all the way into the furnace there is a long way and along the way someone would notice and even if not most of the contamination would be gone because most of it comes from the dirt and dust that was attached to those cars.
nikkkom
Insights Author

Salvador said:
quite frankly i'm not so scared because someone cut down some trees that were in the exclusion zone ,remember that not all the trees there are contaminated or highly radioactive

Trees growing on a territory with thousands of times higher concentration of Cs-137 above Earth average are not contaminated? 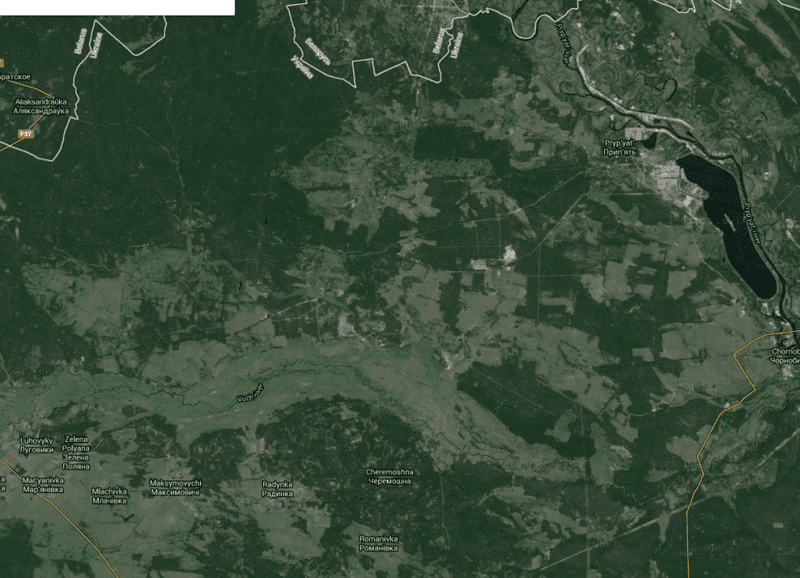 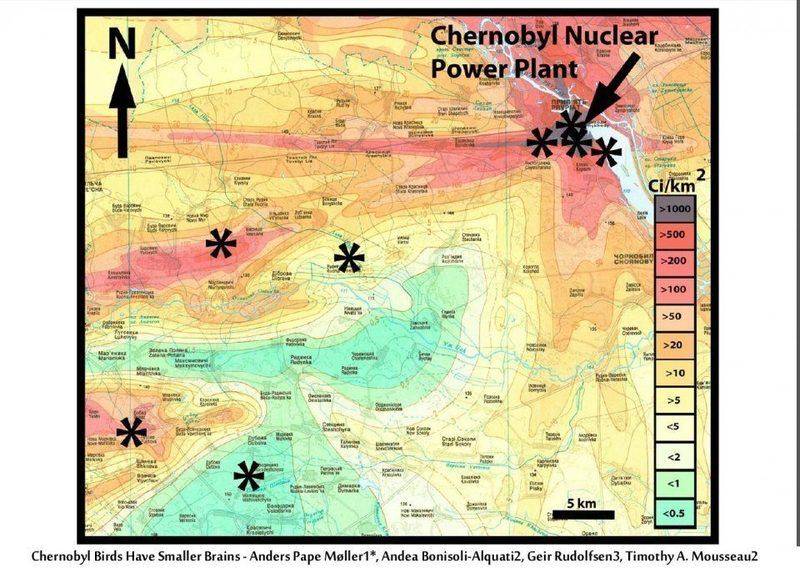 I'm not saying radioactive contamination is something good and that we should take up as much as possible i'm just not buying the "be scared" monsters out there ideology either.

as for the graveyard , bionerd23 has a video from 2012 which is probably as close as most will ever get.

I wonder how does she get there so often and travel so freely , probably a bit of good talking and some money , much like I got to visit the Ignalina RBMK reactors , which was official and the security was very tight although the visit isn't offered to anyone who simply wants it.

for those who want to explore the depths of Chernobyl via video I suggest bionerd23 channel.

She found 3 mSv/h scrap. 25 years after the incident. Nice...
Salvador

But i highly doubt anyone even someone interested in scrap metal was able or even willing to take the tools to cut and work with that steel , I mean I have sold scrap steel myself , the leftovers I get from working on stuff and I can tell you the price is not high enough to take the risk for health while working on those few trucks left there.
that tank that she measured in the video weighs no more than 10 to 20 tons maximum , the very tank she measures seems like an agricultural one used for carrying field spraying chemicals it probably weighs around 5 or so tons empty. Now the current price of ferrous thick steel is around 160 euros for 1 ton.
I highly doubt someone would do all this trouble and go through all these problems and dead ends to recycle and cash in a few thousands for this kind of risk.
Not to mention that along the line of scrap until it gets to the furnace someone has atleast a crude dosimeter and he could see the readings going "bananas" and being dangerously high.
atleast in my country all scrapyards are obligated to have some kind of radioactivity measuring on site.
all in all the locals know how radioactive this junk is i doubt some random guy would go to cut it for someone else in exchange for a bunch of vodka bottles.
nikkkom
Insights Author

You greatly underestimate the levels of stupidity of some people.

There were incidents in Russia of people trying to vandalize Sr-90 based RTGs for scrap metal. Despite all the prominent labels and markings on them which indicated that they *must not* be disassembled.

Cs 137 is a *fission* product, ie almost entirely man made from either atmospheric weapons testing or in power reactors. Comparing Cs 137 to some natural background levels of Cs 137 is nonsensical. The relevent comparison for health reasons is to natural background *radiation* levels, and no, Chernobyl radiation levels are not 1000 times above background miles from the accident cite.
mheslep
Gold Member

Where is that result found? I see her with meter in hand reading 8 *micro* Sv per hour within sight of the reactor cite. Here:

Where is that result found?

F
Chernobyl The steps of Chernobyl and effects of radiation
3

Could a tank or land vehicle be nuclear powered?
2

Chernobyl Alternative to generators to prevent the Chernobyl disaster
2