Finally, all the Moon Hoaxers can move on, right?

jimmysnyder said:
why can't they put all the cats on the moon?

Because there's nothing for them to eat, unless the moon was made of cheese in which case there would be mice.
Since there aren't cats on the moon it must not be made of cheese! - Where do I collect my Nobel prize?
Jimmy Snyder

mgb_phys said:
Where do I collect my Nobel prize?

You can have one of mine. I got one for proving the moon isn't made of green cheese too, and another for proving it is.
turbo
Gold Member

I have information from a credible source that NASA faked Obama's birth certificate. Pass it on.
Pengwuino
Gold Member

turbo-1 said:
I have information from a credible source that NASA faked Obama's birth certificate. Pass it on.

Pengwuino said:
Obama faked the moon landing. Pass it on.

The Obama cyborg is what NASA has been secretly creating behind all those closed doors for the last 40 years. Pass it on.
jobyts

[hope I won't spoil the fun, if I ask a serious question in this thread...:)]

How did rock form in the outer surface of moon (with such low gravity)? Does moon have a evidence of volcanic eruption?
DaveC426913
Gold Member

jobyts said:
[hope I won't spoil the fun, if I ask a serious question in this thread...:)]

How did rock form in the outer surface of moon (with such low gravity)? Does moon have a evidence of volcanic eruption?

Not so much volcanic, but it has been insulted by monumental collisions that have liquified the core material, causing it to pour out and cool on the surface. This is what the great mares (seas) are made of.
mgb_phys
Science Advisor
Homework Helper

jobyts said:
How did rock form in the outer surface of moon (with such low gravity)?

You don't need gravity to form rocks. Asteroids have much less gravity than the moon and they are rocks.


Does moon have a evidence of volcanic eruption?

No, the moon doesn't have a liquid core. Even if it were formed like a planet the small size means that it would have cooled completely (think of surface area to volume).
The moon was almost certainly formed from parts of the Earth's crust and upper mantle that were knocked off when the earlier Earth was hit by a large asteroid. These would have been melted by the impact and turned into the moon by a combination of gravity and surface tension as they cooled.
DaveC426913
Gold Member

mgb_phys said:
No, the moon doesn't have a liquid core. Even if it were formed like a planet the small size means that it would have cooled completely (think of surface area to volume).

A billion years ago it had a liquid core but it is cold and dead now. (THough it still gets moon quakes.)
fillindablank

TheStatutoryApe said:
NASA recently found some lost footage from the mission which they are supposed to be releasing soon. Richard C Hoagland has already come out saying that they actually intentionally hid the footage until they had adequate technology to undetectably edit out the parts they don't want us to see. So obviously the picture is fake.

It isn't fake, they had to edit out the aliens that were there.
mgb_phys
Science Advisor
Homework Helper

fillindablank said:
It isn't fake, they had to edit out the aliens that were there. 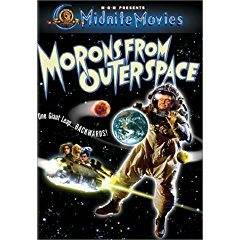 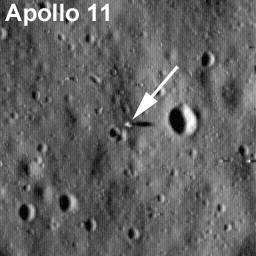 Photoshopped! Also; what is this suppose to prove, it's just a dot. and the 100metres zoom'ed one is just some pixels :P Nah im kidding, I think the moon landing really happened of course, but there will always be a few conspiracy nuts out there that will deny this. It is somewhat weird though that footage just gets lost and then recovered out of nowhere. And whats up with the new HD footage? this must be upscaled or what, hd wasnt around in the late 1960's :P
mgb_phys
Science Advisor
Homework Helper

harrisjr said:
And whats up with the new HD footage? this must be upscaled or what, hd wasnt around in the late 1960's :P

The cameras on the moon shot very low resolution 320lines @ 10 frames/second - this was becuase there wasn't enough bandwidth on the data link to send back regular video (only 500KHz, mono-NTSC needs about 4.5MHz)
US broadcast quality (in those days) was 525 lines interleaved @ 60 fields/second

The video that was broadcast was from a TV camera looking at the monitor at the ground station showing the 320 line/10Hz signal.

Nasa has subsequently mislaid the data for the original 320 line images and only has low quality recordings of the the broadcast from the screen camera. It is these tapes that have been cleaned up and upscaled for the release.
But even the original data is far from HD, it's only half the number of lines and 1/6 the frame rate.

There was a hope that one of the download stations might have kept a copy of the raw data, but storing even 500KHz digital data was an expensive operation in 1969 and none of them could. The stories of 'lost moon footage found in Australia' was just journalistic spin - it was Nasa library footage of the broadcast signal, the same one you see on every Discovery channel trailer.
Last edited: Aug 11, 2009
drizzle
Gold Member

how much did it cost NASA for a two way tickets to the moon? [like there will be one way ticket]


seriously, would it cost them as much if they do it again? I mean nowadays with the new tech things are more efficient, lighter, cheaper …etc
Guesser7

This proves absolutely nothing. I would even question the length of the shadow taking all the othe stuff strewn around and craters and shadows . It was probably done by some Fx guys in a studio.

I have entered into many discussions on this topic and there is not one single shread of tangible proof they went to the Moon. I have also seen all the manufactured evidence from Mythbusters and that other little Jay Windley guy. They are making the evidence fit, anyone can do that, it is not clever at all. Jay Windley said that "The hoaxers drive a wedge into a laymans uncertainty". So he thinks he is the expert and we are all just stupid laymen. A bit of a put-down eh? Well I would like him to explain some of this.

The flag clearly does move when no one is near it? watch closely it does clearly move.

When did hypergolic fuel ever burn completely crystal clear? impossible.

The lunar landscapes are rounded and smooth. Impossible, that landscape was shaped by impacts that blasted into the surface. It would be like going into quarry after blasting and findng that all the rocks were smooth edged and nicely rounded off.

The best one they came away with was the crosshairs etched into the camera lenses being behind foreground objects. They said this was caused by burn out caused by the strong light. What total and utter rubbish because some of the crosshairs are completely visible over object with the same luminousity.

And please don't say moon rocks. Antartica is covered in rocks that were blasted from Mars and the Moon and were caught in our gravity field.
cristo
Staff Emeritus
Science Advisor

Related Threads on Finally, all the Moon Hoaxers can move on, right?

Why can't everyone be right all the time?

Was Mach right after all?

Women Have Been Right All Along

Finally! Now I can carry on with my life!
3

FINAL VOTE PF PHOTO CONTEST - It's All There, In Black And White!

I Can Finally Fold Shirts!

Landing on the moon

Landed on the moon?
2