Forces between charges. Did the problem, have question on the result.

Three point charges are located at the corners of an equilateral triangle with side length a=0.50m

My question is how can I subtract the vector F2/1? Vectors cant be negative right? I found the magnitude of the vector to be negative. Should I have not included the negative sign for the 4 micro coulomb charge? Then I add the two vectors and that will give me the correct result.

My result is correct, but I cant minus vectors so I kind of did it illegally ya?

Thanks for your help. 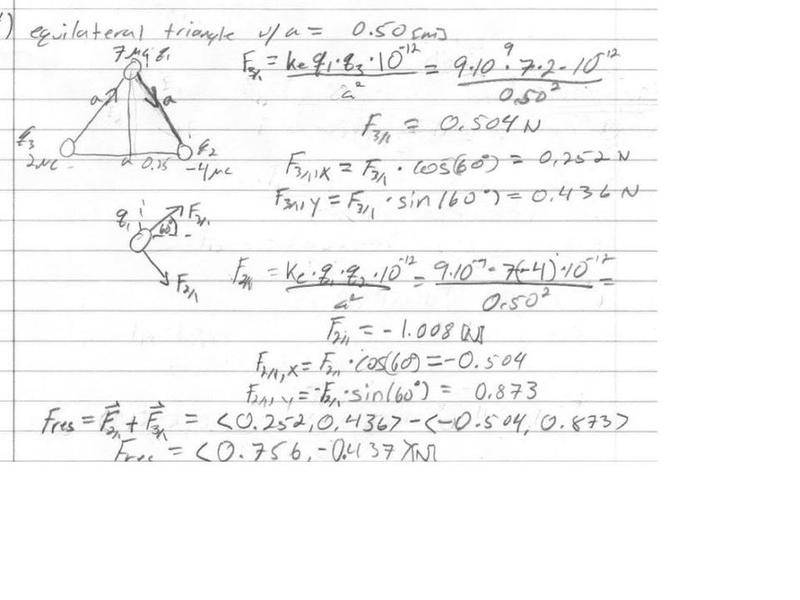 Ok, that sounds very familiar to how I studied it in math.

I dont know why I can get confused with vectors.. I think its because my intro to physics teacher said that only magnitudes (scalars) are positive. If your vector comes up negative, you have initially set it in the wrong direction.

I know part of that is true, or maybe all if it in a way, I just interpreted the first part wrong I think..

So the work I wrote is correct? By adding the vectors, I subtract the components of F2/1 from F3/1
Hellabyte

Yeah it looks fine to me, i don't have time to look into detail. You should talk to your physics teacher and tell him that the way he is saying it is confusing. I am sure he will appreciate feedback on his teaching.
Share:
Share

Related Threads on Forces between charges. Did the problem, have question on the result.

Angles between the forces Problem

What is the force between the two point charges?

Rotating the Resultant Force on a Charge

What is the magnitude of the force between the two charges?