Hello I'm trying to set up my gaming computer in my 2018 Kenworth T680 but having power issues. Both with the monitor and the tower. But mostly the monitor. I realize the power inverter is likely incompatible with monitor and tower PSU. I need a workaround. Issue: Monitor works interminitly for short periods of time then goes into sleep mode. Sometimes says "No Input" when it it hooked up properly. Tower works but interminitly restarts. Sometimes I get the error "Please power down and connect the PCIe power cables for this graphics card". But all power cables are secured in the proper places. Tower+ monitor works no problem connected to a wall socket.

Its possible I have too many things hooked up to the inverter but I've tried it with just monitor and tower hooked up with these results. I realize the monitor and tower PSU are probably incompatible with the inverter so I'm asking for ideas or workarounds to get my gaming rid working with no issues. Thank you.
Last edited by a moderator: Sep 26, 2018

Can you check if the voltage doesn't sag under load?

Most inverters don't produce real sin output, more like just a few steps, not every PSU likes it.
russ_watters
Mentor

That's what my cheap inverter does (edit: produces instead of a sine wave) (put through some random voltage divider, so don't look at the vertical axis). 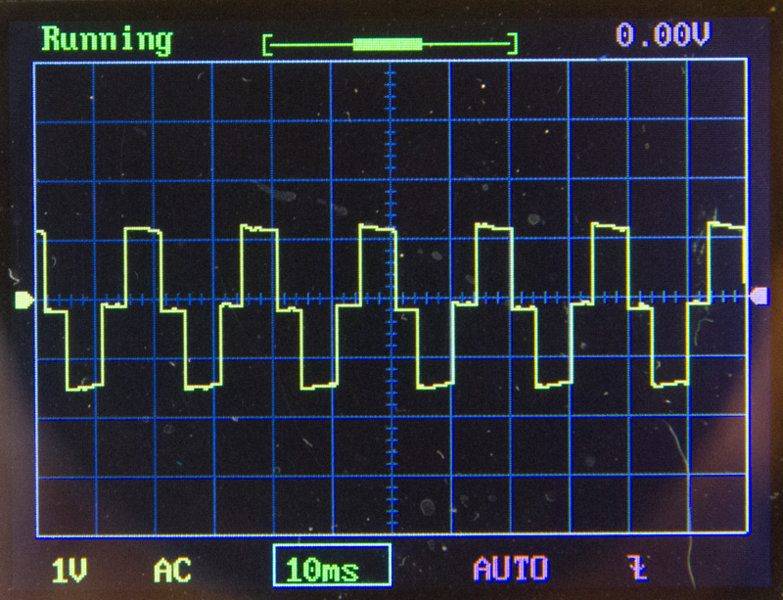 You need a better inverter. Unfortunately, decent ones are expensive, but it doesn’t look like your budget is that tight.

For reference, I had in for repair a Waeco 1500W model that produced a very clean sine and - unusually - was genuinely capable of achieving the rated output. It retailed for about four times the price of your one. Cheaper inverters can rarely run at anything like the stated power and the peak rating is just a fairytale figure.

Modified sine is, as I have said before on here, a cute way of saying ‘not a sine wave at all’. Electonics hate it.
jim hardy
Science Advisor
Gold Member
Dearly Missed

Guineafowl said:
Modified sine is, as I have said before on here, a cute way of saying ‘not a sine wave at all’. Electonics hate it.

Is that because of "power factor correction" circuitry?
Guineafowl

jim hardy said:
Is that because of "power factor correction" circuitry?

In the circuit being powered? Not sure.

I guess with active PFC the controller has trouble tracking the choppy waveform.

With passive PFC (usually just an inductor, as far as I can see) you might get better results from the low-pass filter-type action. Anecdotally, switching on an inductive load alongside the finicky electronics will help the latter run on a MSW inverter.

Perhaps the OP could design an LC low-pass filter... Easier to just get a better inverter, but not as much fun electronically.
jim hardy
Science Advisor
Gold Member
Dearly Missed

Guineafowl said:
I guess with active PFC the controller has trouble tracking the choppy waveform.

it sure claims to have active PFC.
One might reach into the power supply and bypass that active PFC.
The rectifier/capacitor/switcher ought to run on anything from 90 to 260 VDC ? One might double or triple the capacitor to improve holdup time..

from its datasheet at https://www.corsair.com/us/en/Categories/Products/Power-Supply-Units/Professional-Series™-Gold-AX850-—-80-PLUS®-Gold-Certified-Fully-Modular-Power-Supply/p/CMPSU-850AX

Your symptoms are typical of a momentary drop in supply voltage. Probably the inverter voltage drops when the compressor in the refrigerator starts. Put the fridge and computer system on separate inverters with separate wiring to the battery.

Tom.G said:
Your symptoms are typical of a momentary drop in supply voltage. Probably the inverter voltage drops when the compressor in the refrigerator starts. Put the fridge and computer system on separate inverters with separate wiring to the battery.

I use the wife’s hairdryer as a variable load on repaired inverters, with a current clamp on the input as a guide to output power (roughly 10W per amp of input current). Any more than, say, 10% sag and the inverter usually latches off and sounds the alarm.

That said, if the OP is in a 120V country then the input voltage to the power supply will be at the lower end of the range, so any sag not noticed by the inverter could put the supply into low-volt shutdown.
Borek
Mentor

Just occurred to me - are you sure your 12V source is capable of delivering over 1500W/12V=125A?
Guineafowl

Again, if the input was sagging, the inverter would be telling us about it.

This one apparently has two options: shut down at 10V to maximise working time, or at 11V to preserve the battery for engine starting.
jim hardy
Science Advisor
Gold Member
Dearly Missed

Could it be we've missed the obvious ?

(From inverter manual) said:
4.3 Trouble loads - Television & CB radio interference CB and television are designed to catch “air” frequencies and signals. Inductive loads such as electric motors (ex: fridge compressor) can emit a magnetic field strong enough to be interpreted as a signal by television and CB radios. If this occurs, the following steps may help eliminate the problem:  Disconnect all inductive loads while using the TV or the CB Radio  Move the television as far as possible from your inverter  Use an extension cord to help dissipate the strength of the magnetic field.  Make sure both DC battery cables are tied up together as much as possible (from the inverter to the batteries)

That inverter takes big gulps of current from the battery., as opposed to drawing constant current like headlights do.
Those gulps of current make magnetic flux that changes from zero to "Some value" at even multiples of line frequency, ie 120 240 etc .
That magnetic flux qualifies as EMI.
"Some value" is proportional to the area encircled by those two big DC input wires connecting the inverter to the truck battery..
Inverter instruction manual at https://www.grainger.com/ec/pdf/45MR76_1.pdf directs minimizing that area without explaining why.

Then run both cables together toward the batteries using the metal clamps and cabin cross members as support. Firmly tie them together using the included plastic cable ties.

Try running your computer and monitor on a 25 or 50 foot extension cord well away from the truck.
If distance solves the 'crashes', revisit the installation of those big DC cables.

In troubleshooting , ya gotta check for the dumb stuff.
When it doesn't help you just don't admit to having been so silly as to try it.
When it does fix something , everybody says "How'd you ever think of that?".

havent heard from you. Hope you're still on board.

Judging by the manuals i'd say you have selected pretty good equipment.
I think it ought to work . Some little detail in installation is not quite right someplace, i think.

Some semi's have outrageously long cables going to the batteries. I once found one open circuited at a crimp connector on a terminal block in center of the frame. That was easy to diagnose , we had 100 volts at the alternator and 12 at battery, but finding the physically open connection was like hunting for an Easter egg dyed camouflage..
Your truck is so new the only visible symptom of a weak connection would be discoloration from heat right at the questionable crimp.

jim hardy said:
In troubleshooting , ya gotta check for the dumb stuff.
When it doesn't help you just don't admit to having been so silly as to try it.
When it does fix something , everybody says "How'd you ever think of that?".

Load this into your word processor, print it out in big fancy letters, frame it, and hang it on the wall.
Blaircroft

I apologize for going silent guys I was on home time and Im not getting notifications from this site for some reason. I appreciate all the feedback

I've had a few problems and dissapointments trying to get this setup to work. I tried the Tigerclaw inverter it didn't power on at all. I took it to a Kenworth dealership and they determined that not only the tigerclaw inverter was a dud but it blew out the fuse on the 4 battery setup. They also installed a new Tundra inverter I guess these are their stock inverters.

I also tried a new monitor. I got the setup to work for a few hours and then turned it off. The next day I could not get it to work at all and now my computer won't post either from a wall socket. Major setback. I'm not an mechanic or an electrician just a gamer who drives a truck I known a little bit to get by with building a great gaming rig and minor repairs to vehicles but I don't have the experience or equipment to test and work on power equipment so I need some advice. How Am I going to do this? I can easily fix the computer but finding an inverter/power setup that can do the job isn't something I'm familiar with or equipped to handle.

C
What can this Inverter Power?

Issue with building a full-bridge Inverter

Issues with my investigation in capacitance

How to calculate needed inverter power?