I have a conceptual question. May be I am sounding a little bit idiotic, so apologize for that. I believe, there is no harming in knowing that I am wrong.

Einstein's general theory of relativity describes gravity as a geometry of space time. On a macroscopic scale, in the space time continuum if we have the sun, stars and other objects placed on space time, it causes a dent (in a very layman's language), or a space time curvature which causes Earth or other celestial objects to move around. For that we have field equations and other things to understand more precisely.

Now, we take another scenario. Say, for example, this world where we live in and we have other terrestrial objects like chair, car, buildings, mountains. Those things also causes a curvature based on the mass and the position.

yup, the Earth's density is not homogenous. "they" can do remarkably precise measurements of gravitational potential comparatives. I think within meters of height.

That said Im not sure how microscopic those equations are still applicable.
dauto

nitsuj said:
That said Im not sure how microscopic those equations are still applicable.

That's actually an important question. The natural assumption is that the equations are applicable all the way down to the Planck scale, but other possibilities are not ruled out - Notably a lot of theoretical effort has been placed on the development of "Large" scale extra dimensions which would lead to deviations from the standard gravitational 1/r2 law.
Naty1

My question is that:

Here you are referring to general relativity and the answer dpends on how microscopic: generally, general relativity [GR} applies to large scales and quantum mechanics [QM] to small scales. Newton's approximate theory describes gravity as an instantaneous force....a very good approximation......Einstein's more sophisticated and more accurate general relativity describes it as a curvature of space and time....but neither is the final explanation....because both GR and QM break down at the big bang and inside black holes...these are called 'singularities'.....very very small scale.

It works ok for atoms, say a nucleus and orbital electrons, but as r approaches zero, the force approaches infinity. Does not work for quark interactions, much smaller distances, which require quantum field theory.
shounakbhatta

Thank you all for all the very wonderful answers.

Well, a special thanks to Naty1. What I mean to microscopic is not the sub-atomic level but our day-to-day life. (I admit that is my mistake.) Well, thanks you for giving an example of Coulomb's law which definitely does not work where radius = infinity.

It brings to my mind (may be I am wrong) that Coulomb's law is exactly the same (provide the charges) like Newton's gravitational law and may be that is the reason that Einstein first attempted the unification of gravity with Coulomb's law.

But it is non-zero! And can be measured. I think the first time that the gravitational force between two objects (of day-to-day size) was measured, was in 1797, called the Cavendish experiment.
nitsuj

BruceW said:
But it is non-zero! And can be measured. I think the first time that the gravitational force between two objects (of day-to-day size) was measured, was in 1797, called the Cavendish experiment.

Wow that is a very remarkable experiment, given the technology used! Looks like "L" is a light source via fire lol. Wiki says John Michell devised the experiment, genius! 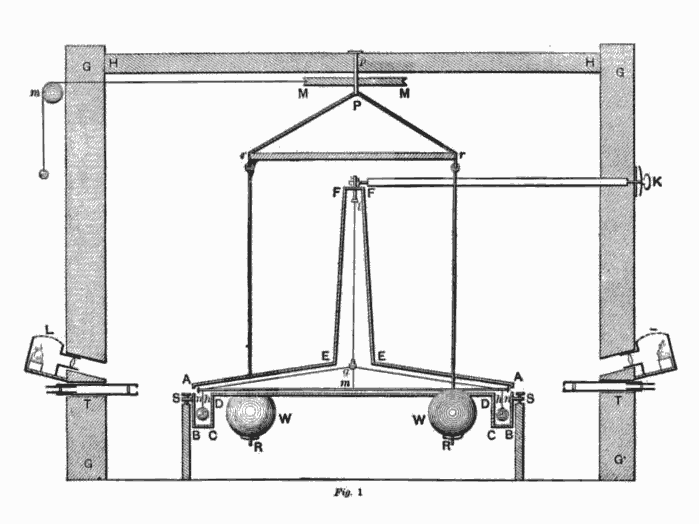 I Conceptual question about warping spacetime

T
Some conceptual questions on SR

M
Conceptual Question about the Change in Mass
2