I was wondering if you could take a look at a resistor that burnt from my microwave pcb. I've had good luck in the past with replacing capacitors and other failed components but I am having a hard time seeing the colors of the resister.

The board part number is WB27X10438 when I googled the part number I am able to see other boards on ebay with the same burn spot where the resistor burned on my board.

The microwave was a ge spacemaker xl1800. Let me know if you need any other information that could help.

Here's the ebay link looks like the same spot.

Here's a link of someone selling a remanufactured board.

There is one on amazon that looks like it might be dark in the same spots as well.

I really appreciate any help you guys can provide.

see if it makes any sense for it to be a low ohm inrush current limiter; that'd be in series with the bridge ?

experiment with this link:
http://www.digikey.com/us/en/mkt/calculators/5-band-resistors.html

Thanks for the reply I am going to look over the websites you've linked I've already been on digikey but I am having a tough time identifying the color bands. It's 5 bands but how do you know what side to start from?

I have that same problem,, which end is which.
You have to treat it like a multiple choice question....
Usually one direction deciphers to a non standard value or something like an impossible multiplier stripe that lets you rule it out.

That last site, digikey's stripe decoder, will decode stripes that would represent nonstandard values , so you have to cross check what it gives you against the standard values from the middle link.

Does the GE website have a service manual? http://www.geappliances.com/service_and_support/literature/?ICID=supportflyout-manuals

You need to search by the microwave model number, not the circuit board part number.

Your pictures were no help - not enough resolution to see anything, even after zooming in on the image. Try a camera with a macro zoom option.
davenn
Science Advisor
Gold Member

considering that the resistor doesn't look overly damaged ( yes it has got hot, but it may not have failed yet)
why do you think it's faulty ?

have you actually tested the resistor with a multimeter using the resistance ranges ?
if so, what did it test ?

Hi Dave I have to get the multimeter from my shop and I'll report back. You might be right it might still work what had happened was I started smelling smoke so I immediately turned it off. When I first took it apart I didn't see the burn mark on the board (I think I just over looked it) so I thought maybe the smell was from the metal shelf possibly touching the side and when I ran the microwave again everything seemed to work fine but I wasn't satisfied with my my shelf theory so I took everything apart again and sure enough I saw the burn mark this time. So maybe it would still be functional I will know more after I get my meter.

Thanks guys! I'll be reporting back shortly!
Last edited by a moderator: May 6, 2017
davenn
Science Advisor
Gold Member

if you are going to do electronics of any sort on a regular basis, a multimeter should be at the top of your tool list. Its almost impossible to do proper diagnostics without one.

If the resistor has failed, and by the sounds of it its a common thing for it to get quite hot on this particular board
The you need to consider why its getting hot and burning out.
The most obvious/logical reason is that this is just a symptom of a fault further "down the line". Some other component has/is failed/failing and the excessive current through this resistor causing it to cook..

This may well be a safety feature .... that is ... its better to sacrifice a 10c value resistor than to risk major component failure or risk the appliance bursting into flames under fault conditions

I totally agree I actually have over 10 multimeters at home but they're the free harbor freight brand ones they give out for free and would not give me a reading.

I get what your saying something maybe causing the resistor to fail.... Since this is the first problem I've had and it has worked fine for over 10 years do you think it's crazy to just try replacing the resistor and watch it carefully?

30k isn't a standard value, BUT it would fall within the range of a 33k resistor with 5 or 10% tolerance

the visible colour bands don't give an indication of that value, but because of the mix of overheating and photography light its difficult to determine the value visually

the other thing you could try and do to help us it trace some of the circuit out that leads to and away from that resistor.... maybe give us an idea of what other components the resistor is connected to

You posted this photo
http://postimg.org/image/3w3v1njmh/
which could pass for left to right,
brown violet grey silver red = 1.78 ohms 2%, which is a standard value


or could pass for right to left
red grey white red brown = 28.9k 1%
which i dismissed as nonstandard value until you reported measuring 30.1k , only about 4% different.

maybe you can make out the colors better in daylight with a loupe ?
By the time i see them they've been through your camera and my screen and my old eyes.

And here's a better stripe decoder that tells you whether a value is standard. I bookmarked it as "a handy reference to know about".
http://www.searchingtabs.com/rcolor/deccolor.htm

Dave's advice to look a little ways into the circuit is good. Knowing what it does would help make a SWAG as to likely resistance value. Or even whether it could be an inductor...

Can you tell from the circuit board traces what its ends are connected to?

Sometimes a low ohm metal film resistor is used for a fuse . That's to prevent somebody from replacing it with a bigger fuse instead of finding the trouble. Look for bulged electrolytic capacitors nearby.
abtar

Hope everyone had a happy 4th!

I had some time to play around with the resister when I have it hooked it stays constant at 29.9k and the more I look at the strips I am thinking it might be either Red Gray Violet Red Brown or Red Gray White Red Brown

This link should take you to the full sized image if that helps http://postimg.org/image/3w3v1njmh/full/

I am going to see if I can get some better pictures on the board later today. I looked closely at all the capacitors on the board originally thinking that was the issue since in the past on other projects they seem like the main culprit.

i wonder if the middle white looking band was purple before it got overheated.
davenn
Science Advisor
Gold Member

definitely a difficult one


it really boils down to what that very discoloured centre band was ??


Here's a table showing all the different resistor ranges 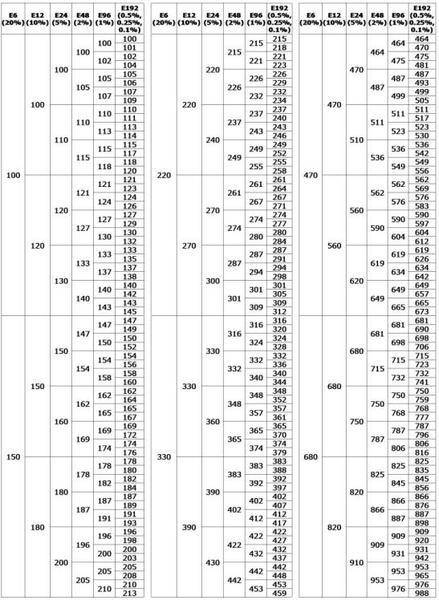 Just wanted to follow up I bought a replacement 28.7K resister soldered it in and everything seems to be working great so far I'll keep an eye on it to watch for any signs of trouble but I think I am good.

Big thanks to everyone for all the information and insight!

What is the wattage of the replaced resistor (28.7k ohms with 1% tolerance)?

Talk2sood said:
What is the wattage of the replaced resistor (28.7k ohms with 1% tolerance)?

Thank you for you help Davenn-
jcy110

I just fixed my GE Microwave XL 1800 for $2.95. I purchased the 1/4W, 30k Ohm resistor and a 220uf 50V capacitor. Soldered them in, put the WB27X10438 control
board back into the unit and it works perfectly. The large black power relay is not manufactured anymore so I figured I would replace the capacitor and resistor, if that didn't work I would have to spring 150-160 for a new power control board. 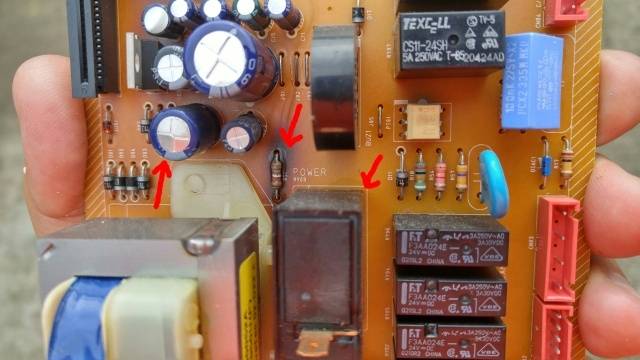 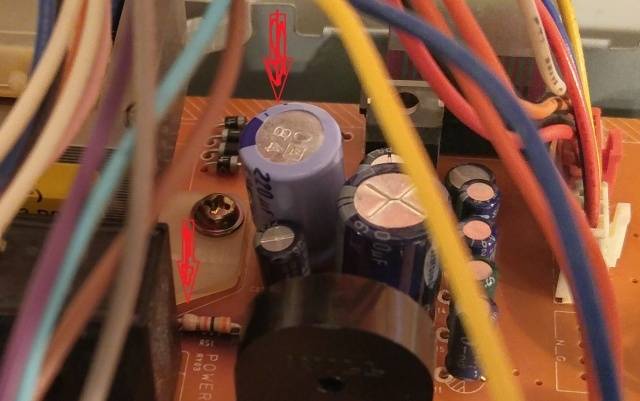 If a ¼W resistor is overheating, I'd be tempted to replace it with a higher wattage, say, 1W, but keeping the same Ohms, providing the board can accommodate the bigger size and heavier gauge leads.
jcy110

I will keep an eye on it from time to time, its very easy to get at and easy to remove. I did ask about it at the electronics shop and the older gentleman behind the counter said it should be fine. I did ask the same question about sizing. Other posts said that the resistor doesn't fail on its own its usually from another component failing. I spotted the ever so slight crowning on the top of the one capacitor so maybe that was the culprit. It would be nice so see the engineers schematic of the board that has the values for the components so when it comes time for a repair we know what we need to get. There are probably .001% of customers that will/can replace individual components on a board, so it wouldn't put a dent in the parts business. So far the microwave is working...............
davenn
Science Advisor
Gold Member

jcy110 said:
Other posts said that the resistor doesn't fail on its own its usually from another component failing.

and that is very significant.


jcy110 said:
I spotted the ever so slight crowning on the top of the one capacitor so maybe that was the culprit.

Electrolytic capacitors are about the most unreliable component there is. Most electronics repair guys learn that very quickly.
Electro's over ~ 5 years old are not to be trusted, whether ones in equip or just sitting on the shelf ... they dry out
and if they are in very warm conditions, eg a PSU, they dry out even faster

If you have ones that even look slightly suspect, just replace them .... they are cheap and it just isn't worth the hassle leaving them there and having them fail in the near future

It's a microwave so caution is in order - you certainly don't want to run it with cover not in place.

If you can safely run temporary leads out to a voltmeter and measure voltage across it in operation.. see how much power it's handling.. E^2/R

at one time there existed 1 watt resistors with a 1/4 watt footprint, for people who'd messed up a board layout.
It was important that they be mounted well clear of the board and with long leads to help dissipate the heat lest it char the board.
It'd be my luck to have one of those and not be aware of it.

best bet would be to figure out schematic of that area and see what the resistor does .
Looks like there's room for a bigger resistor, though
jcy110

Thanks for the input. When it fails again I will replace all of the capacitors and upgrade the wattage of the 30K Ohm resistor to the largest I can fit into the spot. Im just glad to get it working again.
rootone

Microwave ovens fail eventually for one reason or another.
My last one failed because it was gradually breaking down that white plastic inside the box, then rust set in.
It's usually cheaper to get a new oven than to replace a failed part in an old one.
Even if you do, some other component is likely going to break.
Log in or register to reply now!

Is this a resistor? Help me identify please.

Could someone please help me identify a burned-up resistor
2

Muddle color bands on burnt resistor, how to determine value?

Help needed with replacement of burnt out transistor

Help Identifying a Component (TO-220)

Help to identify a capacitor in this schematic

Help me identify this capacitor
2

Please help identify what this is