How can Bernoulli's equation be applied in this problem? 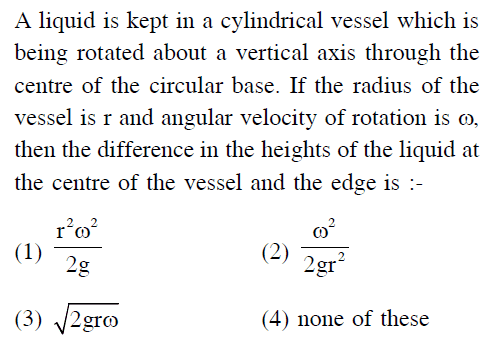 First I would like to mention that I have solved this problem using force approach and got correct result . My problem is that when I saw the official solution , I was quite surprised to see the application of Bernoulli's equation . I believe it cannot be applied here. Here is the given solution . 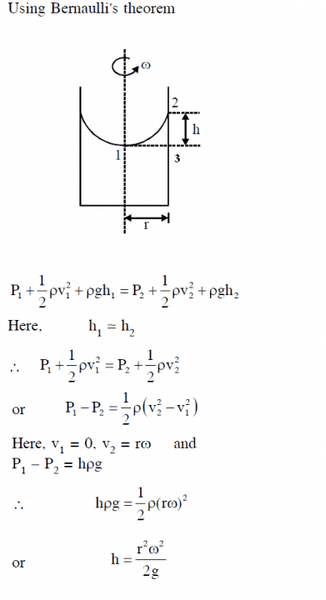 To add to my surprise , I found the same problem in another book and similar use of Bernoulli . The only difference being that in that solution , they worked in two steps . First they applied Bernoulli's equation between points 1 and 3 and then used hydrostatic pressure difference between 2 and 3 .

I would request experts to given their opinion whether it is correct to apply Bernoulli's equation in this problem .
Many Thanks

Bernoullis' equation is an application of conservation of energy to incompressible fluids - it is appropriate to conserve energy for this problem.

The given solution does not appear to be correct. Points 1 and 2 are at the same pressure (atmospheric).

I also don't see how to apply Bernoulli's equation directly between points 1 and 3 since these points are not on the same streamline.

If you go to the rotating frame of reference, you have a static fluid with a fictitious centrifugal force field in addition to the gravitational field. You can then use principles of fluid statics to find expressions for ΔP between 1 and 3 and ΔP between 3 and 2.
Vibhor

TSny said:
The given solution does not appear to be correct. Points 1 and 2 are at the same pressure (atmospheric).

I also don't see how to apply Bernoulli's equation directly between points 1 and 3 since these points are not on the same streamline.

I agree . Thanks a lot . I wonder how physics principles are being applied so whimsically .


TSny said:
If you go to the rotating frame of reference, you have a static fluid with a fictitious centrifugal force field in addition to the gravitational field. You can then use principles of fluid statics to find expressions for ΔP between 1 and 3 and ΔP between 3 and 2.

This is exactly what I did to get the result .
Chestermiller
Mentor
Insights Author

I agree with you guys. This doesn't work for me at all.
Vibhor

There is another fluid mechanics question whose " official answer" is troubling me . But this time I am not as confident as I was in the OP . I might very well be wrong .

Please see the attached picture . I believe answer should be option a) . But answer given is option c) .

I do not see why the line of action of normal force should act away from the center . If normal force acts to the left or to the right , then force due to the top on the liquid would create a torque on the liquid w.r.t center but liquid is in equilibrium w.r.t the vessel .

OTOH if the liquid was not completely filled , then I think the CM of liquid shifts towards left and so does normal force .

Does it look reasonable ?

Is the water pressure on the top of the box the same for all points of the top?
Vibhor

I am not able to argue how the net normal force is towards the left .
TSny
Homework Helper
Gold Member

But average of these forces could very well lie at the center of the top ??

If I'm understanding the statement of the problem, you want to replace all the normal forces on the little patches of area of the top by one effective normal force.

So, you will have to think about where the effective normal force must be located to produce the correct torque on the top of the box.
Vibhor

I think I also need to bring in net force on the left and right walls as well . The magnitude of net force on left wall by water will be more than the right wall .
TSny
Homework Helper
Gold Member

However, it is interesting to work out all of the walls.
Vibhor

Sorry . I am stuck . Could you please elaborate .
TSny
Homework Helper
Gold Member

Practice with a couple of simple examples. In figure (a) below, how would you replace the two individual forces by one equivalent force? Repeat for figure (b).

Ah ! This is a wonderful pictorial explanation TSny .

Thank you so much
TSny
Homework Helper
Gold Member

I just wanted to confirm a few things .

a) If we put the origin of the coordinate system in the accelerated frame at the topmost left point then pressure varies along the top according to ##\frac{dP}{dx} = -\rho a x ## ( 'a' is acceleration of the box) .

Is there anything unreasonable I have written ?

The thing which creates confusion is that despite everything being similar in the case , when closed box is completely full and when it is partially full , is the visibility of a tilted free surface in the latter . But I guess that is because the topmost layer of water is constrained to be in the position it is (not free to move ) , both by the top surface of box above it and water beneath it . Is there more to it ?
TSny
Homework Helper
Gold Member

Yes. It's essentially the same as having zero acceleration of the box, but just tilting the box.

Related Threads on How can Bernoulli's equation be applied in this problem?

Why doesn't Bernoulli's Equation apply in this problem?

How to apply bernoullie's equation

Applying Bernoulli's Equation to a Siphon

Does Bernoulli's equation apply to a fountain?