How do solar cells generate current from pn-junctions?

Looking for a practical description. I have a feeling I am grossly misunderstanding something fundamental about electric circuits and apologize if my questions are confusing because of it. I have these two sources:

My (probably naive) understanding of the process is as follows:


The acs source says in the very last sentence:

This reads to me like the electrons "double back." They go from n -> p -> n -> copper wire. I thought a circuit needed to flow in one direction. In fact, in order for the copper wire to attract n-type electrons, the copper wire end attached to the n-type must be positively charged like an anode. However, that would mean the cathode/anode ends of the copper wire would be oppositely charged to the dipole orientation at the junction. As I understand, this would constitute a reverse-bias circuit, working against the chemical potential of diffusion by acting against the accumulation of an opposing electric potential within:

I would think the potential should be in the opposite direction and consistent with the charge distribution of the depletion region. Electrons should flow from the negative p-type into the copper wire's anode, around the wire to the cathode, and into the positively charged n-type, replacing electrons at the depletion zone that had moved into holes resulting from outflowing electrons in the p-type. That would be a forward-biased circuit as shown:

This however contradicts the ACS source which explicitly depicts that in a solar cell, the electrons flow from the n-type into the wire and reenter at the p-type, as seen in the top right of this diagram: 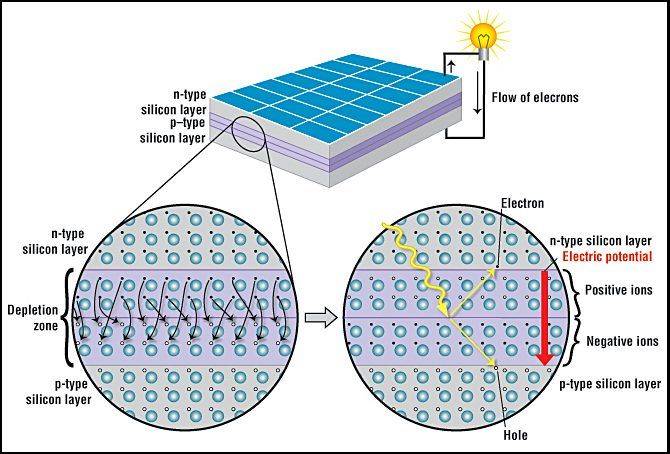 1.
Could someone please explain what are the correct electric signs at each end of the copper wire, and how these come to be? My goal is to understand how electrons flow from the n-type into the copper wire and back into the p-type after electronic photoexcitation, and why this can proceed in the opposite direction of the depletion zone's dipole. I don't understand how the cathode/anode ends of the copper wire can coexist with an oppositely oriented dipole in the depletion field. I expect the two electric potentials to work in opposition.

2.
Why is sunlight even necessary? If the chemical potential of a pn-junction is already sufficient to drive the formation of a potential, can't we just attach a copper wire, whose electrons are driven by the potential from diffusion, and already have a functioning circuit?

Thank you for your time.

Here is another article, that you may enjoy reading. I did not have Java turned on, but was still able to read the article. http://micro.magnet.fsu.edu/primer/java/solarcell/
Charles Link
Homework Helper
Insights Author
Gold Member

In an open-circuit condition, there will be a potential created from light shining on the p-material as you described above, with the n side being more negative. You can measure this potential with a voltmeter, and you read a forward voltage from p to n. If you short circuit the photocell, you will get an external current flowing at zero voltage with the electrons on the n side going back into the valence band in the p material. Photodiodes used to measure light intensity are typically operated in this manner, where a current amplifier (op-amp circuit), that essentially has the inverting input at a virtual ground, puts out a voltage proportional to the current that flows when the photocell is short-circuited. ## \\ ## The photocurrent is a reverse current. Inside the photodiode, electrons travel from p material across the junction to the n side, and when short-circuited, a steady flow of electrons back into the p side from the external circuitry occurs, so the current through the diode is negative. The photodiode is very linear in its response, typically generating one photo-electron per incident photon with perhaps an 80% or better efficiency. When used as a solar cell, it generates a positive (forward) voltage at some negative current (the operating point is in the fourth quadrant on the I-V curve), and if you connect a resistor across the photocell, this makes a load line, basically superimposed on the I-V characteristic curve, that intersects the I-V characteristic curve of the photodiode in the fourth quadrant. There will be a positive (forward) voltage, but a negative current where the resistor load line (through the origin with slope ## I/V=-1/R ##. (Basically writing ## V_{diode}=-I_{diode} \, R ## where ## R ## is in series with the diode and ## I_{diode}=-I_{resistor} ##. Meanwhile, we also have the photodiode current is a function of the photodiode voltage, ## I_{diode}=I_{diode}(V_{diode}) ##, where this characteristic curve will be affected by how much light shines on the photodiode.) ## \\ ## Additional item: Without any light, the I-V curve for a photocell is that of a diode. With light incident on the photodiode, basically it causes the I-V curve of the photodiode to shift downward in the vertical direction, with the amount of shift proportional to the incident light intensity. The operating point is found in the 4th quadrant of the I-V curve. If the photodiode is open-circuited, the forward voltage can be read on the (positive) x-axis of the I-V curve for that particular light intensity. ## \\ ## Note: If you google Wikipedia "photodiode", you can essentially find the above load-line explanation with a diagram.
Last edited: Jul 17, 2017
rootone

Essentially what is happening is that photons, representing parcels of energy, are being absorbed by atoms of the semiconductor material.
That causes electrical potential to change in the material.
After that it's about efficiently extracting energy from the charged atoms, which would prefer to be in their normal ground state.
blaisem

Thank you very much for the responses. They all contributed in some way. The FSU link was also helpful for distilling the background I knew and providing some perspective on what I didn't know.

After further looking around, I came to a few conclusions. A lot of it is superfluous information to what I asked, but writing it down helps me to reinforce the concepts, and maybe it will prove useful to someone else.

On the interaction of the depletion zone with the reverse-bias potential:
Comparison of reverse-biased vs forward-biased junctions from hyperphysics. The width of each respective depletion region is what's relevant.

Current generated vs applied Voltage - Breakdown of a diode from Wikipedia 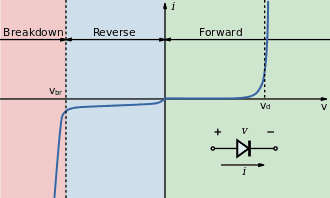 On solar cells with zero-bias and forward-bias:

Example of injection barrier in a solar cell. In the diagram, a reverse-bias (negative voltage) generates no current, presumably because it's below the breakdown voltage. 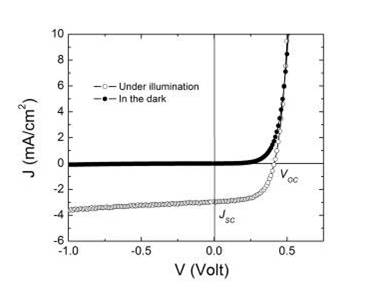 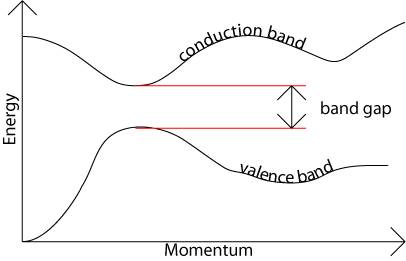 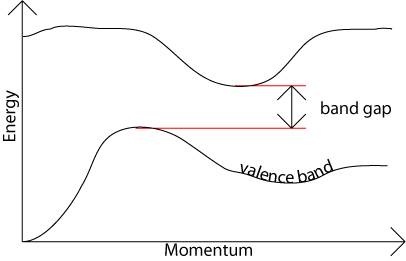 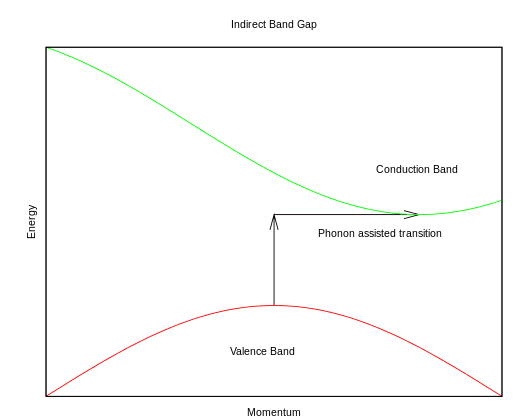 The answer to my question mark in step number 5 of my first post I now believe to be:

In a solar cell, when light excites a p-type electron into the n-type semiconductor, rather than recombine, it is actually favored to proceed toward the electrode, due to it being a faster process than recombination. I should emphasize I didn't find a source on that statement, but it was one of the obstacles to me understanding the process, so I ended up inventing this answer to overcome it (feel free to correct me if it's wrong). At any rate, crossing the depletion zone involves moving the electron toward a positively charged region, which means the electron gains energy, so a positive voltage is established over the n-type semiconductor. It runs through the external circuit, drops off its energy and returns. Thus, the pn junction is necessary to establish the voltage difference and prevent simply recombining after photoexcitation.

So in summary: the electron is not favored to recombine; there is no applied bias, rather the reverse bias is a result of the electron gaining potential energy by moving toward a positive charge across the pn junction; and that leads to the reverse current.

The various articles I read almost all mentioned the electron is "swept toward" and becomes "stuck" on the n-type due to the electric field of the depletion zone, but this doesn't make intutitive sense to me as technically there should be a more powerful chemical potential to push it back -- that is after all why the electrons diffused into the p-type in the first place in spite of the accumulating electric field. I just think of it as the n-type conduction band being lower in energy and therefore unable to return to the p-type which has a higher-energy conduction band.

There's a picture from Wiki on this:

In addition to the URL links above and elsewhere in this thread, chapters 3 and 4 on this site (navigate via left sidebar) were also quite thorough and helpful.
Share:
Share

Related Threads on How do solar cells generate current from pn-junctions?

Why do we need tandem solar cells?

A
Could solar PV cells be made out of aluminum?