The voltage between the opamp inputs is zero for IDEAL opamps only. However, as I wrote, E1 and E2 are FINITE gain values. I have used a symbolic analyzer which, of course, does not accept infinite values.
But if you like you can set these values to infinite and look what happens.
NascentOxygen
Staff Emeritus
Science Advisor

Bullington said:
I have my reasons for it being a bad circuit

I submit
it's a sophistic rhetorical electronics riddle. And a control system exercise.

1. Absence of DC coupling assures it'll saturate.
2. Dueling opamps compete for control of same node.
3. Extraneous parts are thrown in to confuse us.

Left pointing opamp call him Louie,
tries to hold his inverting input at zero, same as his noninverting input
because that's what opamp circuits do, hold inputs equal.

Right pointing opamp call him Ralph,
tries to raise his inverting input to same as his noninverting input
because that's what opamp circuits do .

But - Those two inverting inputs share a node.
So who will win control of that node?
I say Louie will win because he controls the noninverting input to Ralph. 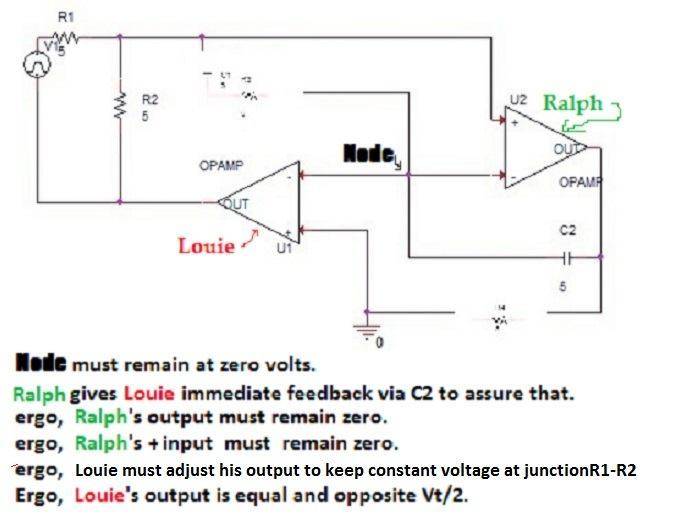 Toning down Ralph's gain via R3 and C1 just might keep it stable long enough to watch it integrate to a rail.
I'd like to see somebody breadboard it with 5 meg resistors and 5uf capacitors.

What do you guys think ?

Ralph has some transfer function
If we call that G, and call Louie a negative feedback H of 1,

awesome effort, you blinded me with such a brilliant insight :)

jim hardy said:
What do you guys think ?

Well, for REAL opamps I don`t think that a transfer function can be given because there will be no operational point within the linear region of the opamps.
Therefore, the node "NODE" will never be at zero volts (this would be valid for working negative DC feedback for both opamps only).
Instead, I think that both opamps will go into saturation.
Last edited: Apr 13, 2016
jim hardy
Science Advisor
Gold Member
Dearly Missed

LvW said:
Well, for REAL opamps I don`t think that a transfer function can be given because there will be no operational point within the linear region of the opamps.
Therefore, the node "NODE" will never be at zero volts

Whenever there's capacitors that can hold charge one must specify among his initial conditions their state of charge. Remember "Constant of Integration" from first semester calculus ?

So, start the thought experiment with initial condition of zero volts everywhere including isolated NODE , and ideal opamps.
Any change in voltage at Ralph's +input will propagate through Ralph, through C2 to Node
which will cause Louie to immediately reach around and undo that change .
So Ralph is held at zero output by Louie, the feedback element. Gain of circuit is zero.

It's a little easier to see if you remove R2, all he does is halve Vt.

I'd call the circuit a "Frustrated Voltage Follower ".
@Bullington ---- See what Professor thinks ?

but i agree it wouldn't work with real parts.