Index of subgroup H is 2 implies

Just had my abstract algebra test. This was the only question I did not answer. The rest I answered somewhat confidently.

I have no idea where to start with this. I can't even come up with a concrete example demonstrating this.

I am not sure how to help prove the general case, but I am interested in the proof.
ArcanaNoir

Hmm, good example! I wonder if this only works with cyclic groups.
I like Serena
Homework Helper

I take it congratulations are in order, if you were so confident?


Another non-cyclic example would be the 4-group of Klein: de symmetries of the diamond.
This is G={id,sx,sy,h}
If H={id,sx} then with every choice for a and b from {sy,h} the product will be in H.

Now for a proof.
I'll show you how it starts...

Now every a and b that are not in H must therefore be in cH, which is also aH then.
So there is an h' in H for which b=ah'

no, it works with any group with a subgroup of index 2.

one consequence of this, is that for any g in G, gH = Hg.

so S and Hab are the same set.

why does this show ab is in H?

note to I like Serena: we're saying the same thing. what i do not know, is whether or not they've covered normality yet, so i have fastidiously avoided the term "quotient group", i am only dealing with a set of (right) cosets, and i only use the property gH = Hg once, to avoid such a digression.
ArcanaNoir

Why is there an h in H such that b=ah?

(class is just now ending, I am heading for home, so I won't see anymore replies tonight)
I like Serena
Homework Helper

ArcanaNoir said:
Why is there an h in H such that b=ah?

(class is just now ending, I am heading for home, so I won't see anymore replies tonight)


There are 2 elements in G/H, H itself and some cH.
So each element in G must be either in H or in cH.

Well typically you would do this with a proof by contradiction.

]=2 index thingy).
Therefore there must be an h in H, such that ch2ch1 = ch.
Can you do some cancellations and stuff?
ArcanaNoir

No, this is getting a little messy. Beep beep, back up the truck. Lets try again.

a and b are not in H, thus they are in the other half of G, aka cH, aka the coset of H.

Suppose ab is not in H. Then, ab is in cH. so...?
I like Serena
Homework Helper

ArcanaNoir said:
No, this is getting a little messy. Beep beep, back up the truck. Lets try again.

a and b are not in H, thus they are in the other half of G, aka cH, aka the coset of H.

Okay, so then...? (sorry I'm not getting it yet)
I like Serena
Homework Helper

ArcanaNoir said:
Okay, so then...? (sorry I'm not getting it yet)

We picked a and b from cH, and we try to prove that ab in cH will lead to a contradiction.

Converting this to specific elements we get:

Substitute a and b in ab, and try to find a contradiction...
ArcanaNoir

What happens if you left-multiply with [itex]h_1^{-1}[/itex] and use that H is closed under multiplication?
ArcanaNoir

What's wrong with the problem?
There are a few interesting concepts in there.
Such that you can divide a group in disjunct cosets.

Visually, I like to think graphically in the X-Y plane.
A subgroup is for instance a set of points on the x-axis.
And another coset is a line parallel to the x-axis.
The operation is vector addition, but modulo some number.
Obviously if you pick 2 vectors in the parallel line, they won't sum up to a vector on that line.

Visualizing stuff makes it come a bit to life for me.

Btw, the proof can be a bit shorter and neater if you use for instance that cH=aH, effectively discarding c.
(In the vector representation of a line, you are free to choose the supporting vector.)
ArcanaNoir

thanks for the help. I am not a visual person, graphs make me sad :( I'm going to be sad a lot in vector calc next semester.
I like Serena
Homework Helper

Ah, you are more in number theory then?
Then you should appreciate abstract algebra all the more! ;)
ArcanaNoir

yes, I love my abstract algebra class. i just didn't dig this problem. I'm not too keen on cosets.
I like Serena
Homework Helper

Well, you're not done with cosets by a long shot! Just you wait!!
(Did you already skip ahead in your algebra material? )
ArcanaNoir

well next we do isomorphisms. after that, looks like homomorphisms, with a section on quotient groups, and then rings.
I like Serena
Homework Helper

Well, there should be a section about the grand "Isomorphism theorem".
It may be included in the section on quotient groups, which is also about cosets.
You should get some headaches from that. (I did!

oh dear. "Isomorphism Theorem (parts 1 and 2)" is in the problems section! If it's the headache you say it is, I'm going to be unhappy!
I like Serena
Homework Helper

No worries, all you have to do is apply Mike's Mathgasm cycle!! 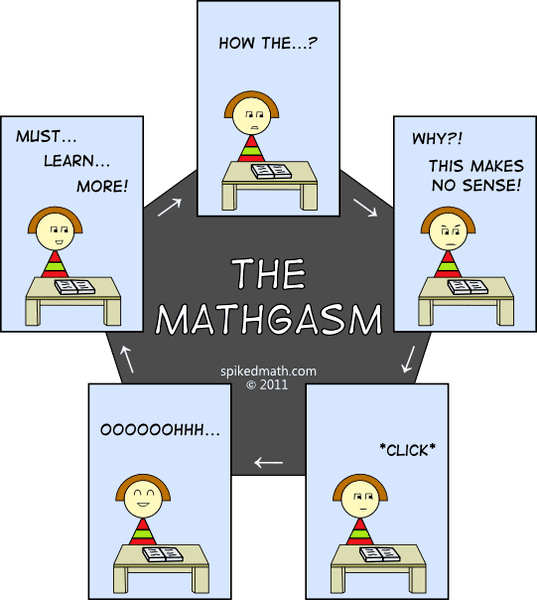 Related Threads on Index of subgroup H is 2 implies

Every subgroup of index 2 is normal?

If H is a subgroup, then H is subgroup of normalizer

Intersection of 2 subgroups is a subgroup?

H
Proof: H is a subgroup of G