Hello, I'm not sure if this is the right place as it's not quite a technical question, but I hope you guys can help me.

I have a question about a certain situation involving reflection of light and how it effects color, and it requires somewhat of an 'artistic' eye. I had a little debate about it with some friends:

Let's say we're looking at a still lake at midday, and we have a ball floating in it. Whatever it's local, actual color is, it's upper part exposed to the sun will obviously be warmer in color. But what about the reflected light in the shadow area? Is it cooler because of the blue sky (as a secondary light source) bouncing back from the water to the ball, or will it be warm because the main light source (the sun rays) is reflected?
If it were just a ball sitting on blue ground the answer would of course be the former - the blue is reflected on it from the ground. So I guess another way to put it is to ask whether the water acting as a mirror and not having an actual color would change things or not? 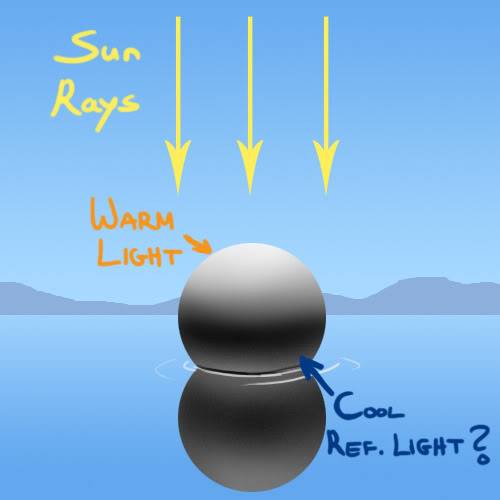 I'm a little confused by your definitions of warm/cool light... they don't make sense. Generally warm/cool have to deal with the temperature of the ball which really won't have anything to do with the color of the ball under any normal circumstances. So what you're really asking about is the intensity of the light from the area on top of the ball and closer to the bottom that is shielded by it's geometry.

Let me ask you a question. If I'm standing outside under the sun, wearing a blue shirt, why does it appear blue to you? It's because the shirt is being illuminated by white light from the sun it's absorbing everything but the blue region of the visible spectrum. The blue light is reflected off of the shirt and some of it makes it's way to your eye where it tickles a cone cell. Your brain interprets and forms an image.

Now as for why the bottom of your sphere is darker than the top? It's just that there is less light reflected off of the bottom of the sphere than there is the top. This is just a geometric consequence of the sun being above the sphere and the fact that a lot of the light will enter the water instead of being reflected off of it. The amount of light that enters a medium from another, ie air to water, is a function of both of their indexes of refraction (the speed of light in a material). So the difference you are looking at is one of intensity.

Aside from the intensity of the light, it seems that he is talking about the color temperature of the light (blue is a cool color, reds and yellows are warm colors). The original poster may want to study the phenomenon of radiosity, where an object picks up the colors of its environment by the leftover spectrums of reflected and scattered photons. This is used in high quality ray-tracers that are interested in emulating the characteristics of physical lighting.
In this case, since the water is highly reflective on a clear day, the diffuse reflection will pick up the color of the sky, unless the water is very shallow.

To test an exact scenario, you can use the free ray-tracer POV-Ray and read the manual on how to turn on radiosity calculation as it is off by default since it uses a lot of resources.
sungod

It might be a little more complicated. Still water would be a specular reflector, so at midday, all the light in the water would reflect straight up if the water were perfectly clear on a cloudless sky. If the ball were perfectly opaque, the bottom would receive a little blue from the scattered light from the sky, I'd think, making it a little blue, but I'd expect it to be pretty dark. If the ball were slightly transparent, then the light going through the top would make the underside slightly blue, depending on the opacity. If there were clouds, then there'd be scattered white light from the clouds reflecting in the water and back up the underside of the ball, as well as transmitted white light going through the ball. This would desaturate the blue-ness of the sky and create a pale blue underside. If the water was not perfectly still, then there'd be scattering off the ripples. I'd imagine this would enhance the effect of a clear cloudless sky or a cloudy sky, since the added light from the riplle reflections would add to whatever light was hitting the underside from either above through the ball or from scattering.
lightwaved

Thanks! Slider142 and sungod - that's exactly what I meant. Like I said, it's a sort of artistic/observational question, but you understood my it perfectly.

The reason I'm asking is that someone insists that the reflected light seen at the underside of the ball will be 'warm' like the key light (the sun, yellowish) and not a little blue like the scattered light of the atmosphere.

If the sun were at an angle, I assume the situation would be like this: 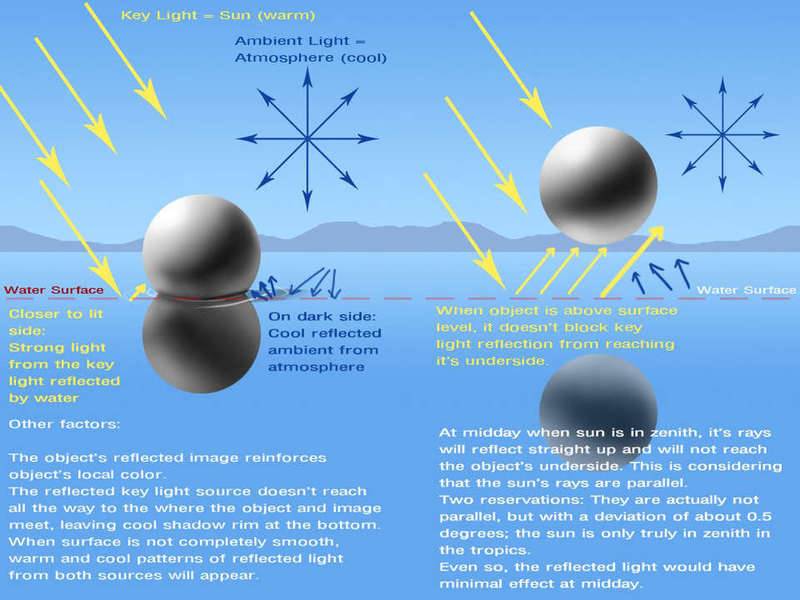 But if it's midday, will the reflected rays of the sun be able to reach the underside, the surface being still water, a mirror or any smooth reflective surface?
Born2bwire
Science Advisor
Gold Member

lightwaved said:
But if it's midday, will the reflected rays of the sun be able to reach the underside, the surface being still water, a mirror or any smooth reflective surface?

The sun only reaches a true zenith in the tropics, but even then most reflections are dispersive to some degree.
Log in or register to reply now!

I Colored Light or Colored Object?
2

Laser, color and speed of light

Color and visible light in general