Local Conservation of Energy in Superposition of Mechanical Wave Pulses

First off, thanks to all the old hands at physicsforums, you guys are truly an amazing resource.

I was thinking about a system today that at first glance, appears to violate local conservation of energy for two mechanical wave pulses interfering with each other.

Consider a ripple tank, in which we have two identical plane wave pulses travelling perpendicularly toward each other. The energy of each wave is equal to the kinetic energy of the wave motion, and the potential energy of the wave height due to gravity. 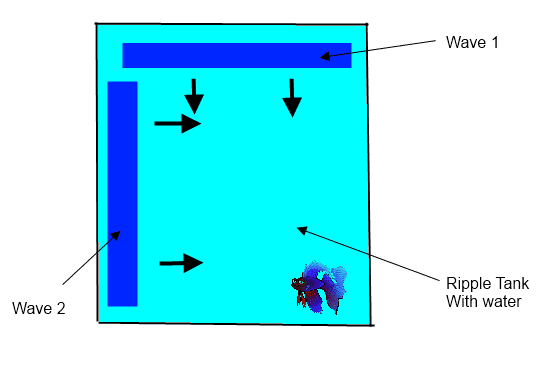 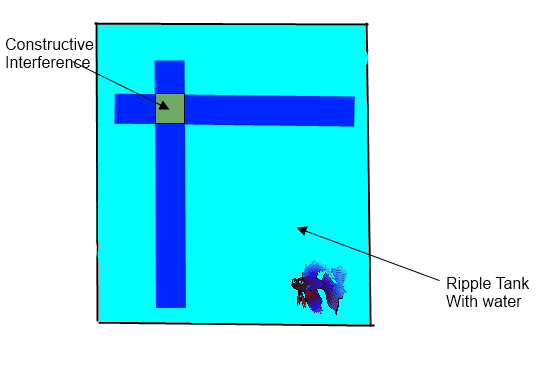 At some point, they overlap, and interfere. The amplitude of the wave at this point is doubled. The potential energy of this region of constructive interference, however, is four times that of each individual wave. How is this possible?

I did a little research, and found these interesting papers relating to the subject:

The first paper derives how two 1D wave pulses propagating toward each other and interfering will conserve energy, due to kinetic energy being transformed into potential energy. The second paper makes the argument that any two waves must produce an equivalent amount of destructive interference for any constructive interference produced, therefore conserving energy.

I tried to consider if the kinetic energy of the waves had been transformed into potential energy, however I believe the kinetic energy of the two waves do not cancel as they do in the first paper, since the x and y velocities are orthogonal, and the z component of the water waves will interfere constructively in half of the interference region, and destructively in the other half. I also don't believe there can be any destructive interference, since this is a wave pulse.
Last edited: Jun 1, 2012

The potential energy of this region of constructive interference, however, is four times that of each individual wave. How is this possible?

This is because the principle of superposition does no apply to energy density. We cannot expect the total energy density due to two sources to be the sum of the energy densities that would be present if only one or the other source was present.

The energy is conserved though. In your example above, the square of overlap will move with no alteration along the diagonal, so the potential energy is constant in time.
Smacal1072

Jano L. said:
This is because the principle of superposition does no apply to energy density. We cannot expect the total energy density due to two sources to be the sum of the energy densities that would be present if only one or the other source was present.

The energy is conserved though. In your example above, the square of overlap will move with no alteration along the diagonal, so the potential energy is constant in time.

I agree, I think that the energy density can be misleading in systems like this - I think the total system energy is a better metric.

My point of confusion is that the total energy of the system appears to be different before and after the wave pulses interfere (between the first and second system state shown in the images).

Suppose we look at the wave pulses before they reach each other, and can interfere. Both waves are identical, and carry potential energy [itex]p[/itex] due to the height of the waves. They also carry kinetic energy [itex]k[/itex] due to their motion. So the total energy of the system is [itex]E_{tot} = p + k[/itex]. The total energy of the system should remain this value throughout the propagation of the waves.

Consider the total energy of the waves in the square separately. They have the same height, and same kinetic energy. When you consider the wave produced by the constituent waves superposition, it has almost twice the height - and therefore (roughly) 4 times the potential energy.

This would be alright if somehow the kinetic energy were being converted into this new potential energy, as is mentioned in the first article I mentioned in my last post. However, I don't see how this is possible, since the waves are travelling in orthogonal directions, so that the x and y components of the wave motion can not negate each other, and the z components of the wave (I'm kinda regretting choosing water waves for this example, since they have a complicated wave motion) cancel in some areas, but reinforce in others. I think then that the kinetic energy of the interfering region is equal to that of each individual wave's kinetic energy.

No, I do not think so. Elongations and velocities add that way. Energy is quadratic and do not simply add that way.

It is easier to explain it on 1D example. Imagine two same symmetrical pulses (both positive - elevations) moving towards each other along a string made of little connected harmonic oscillators.

Because the medium is made of harmonic oscillators, the kinetic energy has the same value [itex]2cA^2[/itex].

EDIT: the harmonic oscillators are bad model here. The kinetic energy is the same as the potential energy for light string pulled by strong force F (guitar string).

Now when the peaks overlap exactly, there is only one peak with new amplitude 2A, so our formula gives its potential energy as

And this is exactly what happens: the partial velocities of the elements due to both wave functions are exactly opposite and cancel each other.
Last edited: Jun 4, 2012
thunderhadron

These energies are the energies the particle on the wave which is propagating.

AT the time of interference the K.E. of both the waves will remain same. Buses K.E. is always 1/2 mv2. and velocity of a wave in a medium remains same always.
But the P.E. of different points will differ according to the above P.E. relation, which says that P.E. is directly proportional to A2

At the constructive interfere points the A becomes twice hence P.E. will be 4 times.
Your confusion clears from here before the interference the P.E. of these two points were cA2 & cA2 hence the net P.E. becomes 2 cA2 and the K.E. had some value let say K but after interference the P.E. becomes 4cA2 "2cA2, increment" while the K.E. still remains same.
From where where the hell this 2cA2 comes ?
Listen In the first paper you read how many Constructive interference are there that much destructive interference will also be there. It was absolutely true.
The two particles which have maximum Amplitude at any time but in opposite direction will have energies as cA2, cA2. The Net P.E. was 2cA2. But both the particles are in opposite Phase hence will make destructive inte. Now there Net Amplitude is zero. So there net P.E. 2cA2, Is it lost?
The answer is no.
Energy can not be lost. It appears in the constructive interference term.
It didn't came from K.E.term
After reading this you confusion might have cleared.
Last edited: Jun 4, 2012
Smacal1072

Jano L. said:
It is easier to explain it on 1D example

Jano, your analysis is completely clear - A 1D wave pulse interfering with a 1D wave pulse will conserve energy, since all of the kinetic energy of both waves' motion is being converted into potential energy in the region of overlap.

However, the system I was imagining was two-dimensional. I don't mean to belabor the point, but suppose we consider your simplified system of harmonic oscillators, but on a 2D plane. Now we have a "sheet" of oscillators. The plane wave pulses are travelling at right angles to each other, so there is no way that the motion in wave 1 can "negate" the motion in wave 2, as you showed in the 1D example, to account for the non-linear increase in potential energy.
Last edited: Jun 4, 2012
Jano L.
Gold Member

The example is just good to show how both the superposition of waves and conservation of energy can hold at the same time.

In case of 2D sheet, things are much more complicated to analyze in such a way. Especially now the shape of the wave does not just travel undisturbed in one direction as in 1D case - the fronts are not as simple as you draw on the pictures above. This is because the wave front has limited length and at its ends it will spread in all directions. After a while the waves meet at up-left field on the diagonal .

We can look at the approaching of the waves in the following way. Draw a line along anti-diagonal through the point of initial overlap and look at the elongations and velocities on the line. On this line, the situation can be described qualitatively as in 1D case; the elongations there will add constructively while the points stop at one instant.

It is quite difficult to imagine the waves and analyze energy conservation this in this way. Much simpler way to be sure of conservation of energy is just to observe that the equation of motion for the sheet has an integral of motion - energy. This quantity then has to be conserved.
Smacal1072

Thank you for taking the time to respond - I considered your idea of looking at the velocities and elongations along the anti-diagonal, and you are right, it is completely analogous to the 1D case where energy is conserved.
Jano L.
Gold Member

Glad to be of help,
Jano
Log in or register to reply now!

I Looking for proof of Superpositional Energy Conservation
2

I Wave interference of a pulse

I Are superpositions of waves with different c still waves?

E+M fields for a localized pulse

Wave pulses on a string