Making an aerofoil with a cantilever

Hi,
I am using a deflected beam to create a parabolic curve to set the shape of horizontal seams between panels on a sail boat's sail. It will give me a tighter curve close to the mast and flatter out near the leach (the trailing edge). I.e. an aerofoil shape.

This is the boat, a radio controlled racing sailboat called an IOM: 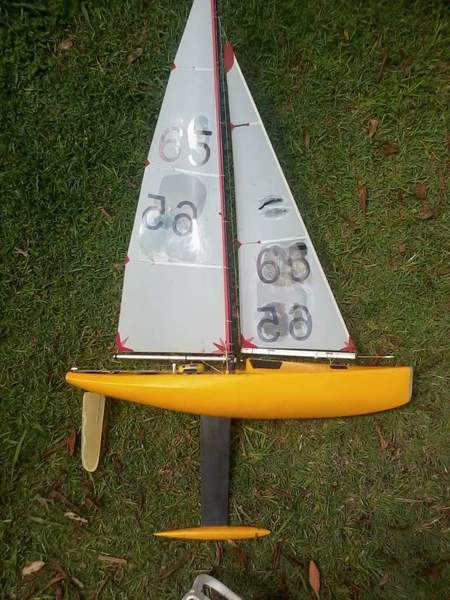 You can make out the horizontal seams- 3 on the large sail and two on the smaller.

The tool I use has two beams clamped together at one end. One beam is flexible the other consider rigid. At the other end I insert a spacer or shim to create a curve in the flexible beam. I fix the straight edge of my sail panel to this curve then straighten the beam, inducing a curve in the edge of the sail. A second sail panel is then fixed to the first and when they are removed from the tool a curve has been built into the two dimensional plane.

The most important result I am looking for when I make these sails is: what is the maximum camber, usually expressed as a % of the chord lenth. For example max. camber between 6 - 12% are common.

Now my problem is this: For a given length of beam how much deflection do I require to acheive a certain degree of max. camber, given the beam length itself will vary becaise of different size sails.
What I really need is a chart or table to read off the right shim width for a given chord length.

To give you a head start, the graph below is used in a similar tool to determine the deflection of a beam fixed in the middle. For a required % of max. camber it gives me a variable which I plug into a formula to arrive at my desired shim width. In the example below shims 1.7mm wide are inserted at each end.

Please note: the above example is for a gadget that is clamped in the middle. The problem with thatis it results in a curve in the seam that is tight in the middle and flatter at both ends - not an ideal aerofoil. I want the same thing but for two beams clamped at one end.

If anyone can give me any direction at all on this I would be most grateful.
Last edited: Jan 30, 2014

I may be wrong here because the sails I have stitched were for high speed land yachts that necessarily employed a much flatter profile than for sail boats. In that little experience stitching sails, the fullness of the aerofoil section was determined by the length of the foot and the attachment to the boom. The horizontal profile was largely determined by the distribution of batten flexibility.

I did not race IOR but I raced in the Big Boat fleet locally in Seattle for several years as Jib, Spinaker and Main Trimmer. We did similar to what Baluncore mentioned for land-based craft.

Our main sail draft was determined by wind speed and relative direction together with outhaul tension at the end of the boom. The wing-like profile was fine-tuned as needed for wind conditions via boomvang and downhaul tension together with horizontal battens entered from the leach of the main sail. These battens helped to create the flatter wing-like area you wrote about above. We always attempted to match the curve of the sail at the mast to the incident relative wind angle. This is a dynamic process. I like what Baluncore mention about tapered battens. The nearer the leech, the stiffer they are to produce a flatter shape there. If they taper nearer the mast, the sail will have more flexibility to curve.

There are other adjustments too like backstay tension. I realize that even when you have sophisticated full sized equipment you cannot really create the pure airfoil shape you want. That's why the America's Cup races in recent years have gone to segmented wing sails. They create the exact camber required for the situations they face which actually varies from the top of the sail to the bottom.

The jib shape is controlled by backstay tension, halyard tension, and adjusting the aft jib clew block position forward and back together with it's sheet tension.

The only thing I wonder about in your case is if you are using a non-cloth material? IOR rules may have rules that govern that.

One last thought. As for camber shape and "maximum" camber, think about where you want your maximum draft. If 35% to 45% along the boom from the mast is ideal, then you want to try to match the incident wind angle off the bow when close hauled. Any more camber than this will give you luff in the sail which robs you of sail power.

Dingomack: (1) Is Cmax (camber) the same as the shim thickness? No, I guess not, because you said camber is between 6 and 12 %, but shim thickness only goes up to 1.3 %. Therefore, can you show the dimensions you are talking about in a diagram, and show exactly what is being measured? And what "deflection" are you talking about? Can you show exactly what deflection is being measured?

(2) What is "draft" in post 1? Where is it located, and how is it measured? Can you post a diagram showing how and where draft is measured, and what it measures?

Can anyone shed any light on the above dimensions, showing how they are measured?
Log in or register to reply now!

Related Threads on Making an aerofoil with a cantilever

Trying to make a cantilever with the highest efficiency

Addition with a cantilevered balcony

Help! An issue with a cantilever tube instrumented with strain gauges.