About the most recent spectacular mammoth find, the little baby: 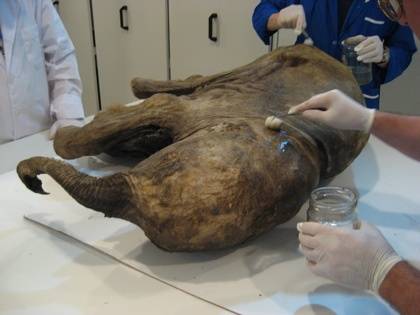 
Global warming may expose even more secrets of the ice age. The well-preserved remains of a four-month-old baby wooly mammoth recovered from melting permafrost in Siberia last spring will now undergo sophisiticated testing and analysis at University of Michigan for testing.

However, if you go there, the first thing that comes into mind is not 'global warming' that has increased the recent mammoth finds as the temperatures are roughly comparable to the 1940s, it's simply business. Ivory.

A few years ago http://www.american.edu/ted/elephant.htm[/URL] swarmed the areas and they are are collecting tons of tusks, with very mixed feelings of the paleontologists, since they ruin the finding places but they also do spectacular discoveries like this, in places in which previously nobody was interested in. There is a lot more to be expected.

Andre said:
About the most recent spectacular mammoth find, the little baby:

Cute little calf, oh but what mysteries will she reveal?

That's very sad about the ivory profiteers of Siberia. So for them, it's somewhat like a cash cow , a means to put food on their table. They don't feel any shame or guilt in plundering the remains of animals from antiquity.
Mk

According to Michio Kaku of String Theory fame, mammoth and dinosaur bones contain soft tissue suitable for DNA extraction. Incredibly the DNA is much better preserved in bones that it is in hair and the like. So be weary if you hear about a rash of breakins into dinosaur museums. Jurassic park here we come!
hypatia

Its so tiny, I wonder how it died.
Log in or register to reply now!

Could ivory be made synthetically?

Siberian Mammoth died out 40,000 years ago