Recently I was playing around with the idea of graphs of projectile motion and I started wondering what it would look like if someone were to graph every parabolic trajectory of a single initial velocity over all angles between o and 90 degrees above the horizontal. I decided to find out so in excel, I used the equation y=tanθ⋅x−x2⋅g/(2⋅vi2⋅cos2θ), with an initial velocity of 6, a gravitational acceleration of 9.8, and 180 different angles, all between 0 and 90 degrees. The resulting chart this: 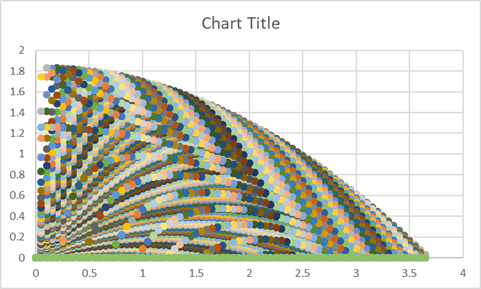 In addition, while playing around with this idea, I also made this chart: 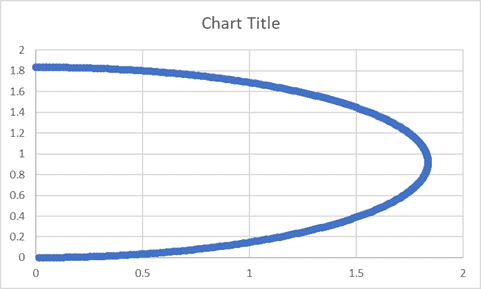 which graphs only the vertices of 360 versions of the above equation. Each vertex was obtained using x=(vi2⋅sin(2θ))/(2⋅g) and y=(vi2⋅sin2θ)/(2⋅g). Like with the other chart, I'm wondering if it is possible to derive an equation for the graph that this chart is approximating.

The envelope is a parabola on its own, example 5 at the Wikipedia page is the free fall you studied.
ScientificMind

mfb said:
The envelope is a parabola on its own, example 5 at the Wikipedia page is the free fall you studied.

Thanks a bunch! I didn’t know that was called an envelope before so it’s really nice to have a name for that kind of thing, and the Wikipedia page looks pretty interesting. Still, from what I can tell, it seems like the second chart, derived from only plotting the vertices of the various parabolas, wouldn’t count as an envelope. Do you know anything about that?
ScientificMind

Quick update: I decided to extend the chart that only graphs the vertices of the parabolas to include the vertices from equations using equations with angles between 0 and 180 degrees instead of just up to 90 degrees, and this is the result: 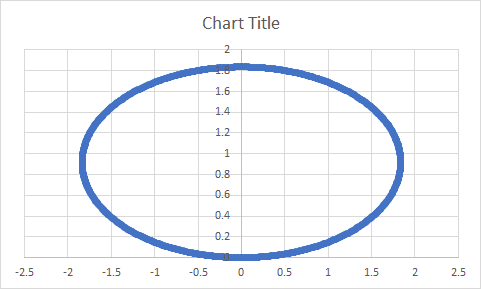 How do I calculate the average emission wavelength from a spectral intensity chart?

Trig chart for the complex plane

I Does this scatter chart really show a cause and effect?
2

How do you chart the fourth dimension on a 3d plane?