so. I don't know a lot of electronics but this is effectively what I'm trying to create:

A photo diode controls the circuit, I assume they give out a current proportional to the intensity of the light it receives.
The ciruit, depending on the light intensity will light up different LED's. Also, there would need to be an ability to adjust this..I guess by having a rheostat connected to the photo diode.

Any help would be appreciated, I love to learn.

That is a very vague description of the circuit. Too vague to suggest anything specific.

Do you know how transistors work?
lostminty

yeah I am a little aware. They're voltage controlled switches in this example? 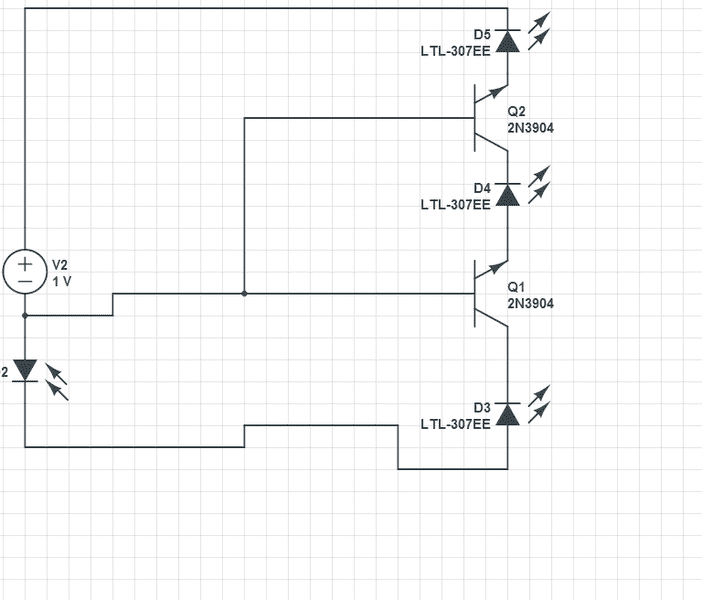 You could use op-amps. And to me it looks like you may have the battery polarity switched up in the example above just a heads up. This circuit shows how to use op amps to measure the level of a battery. You can easily modify it to measure the level of light. Connect your phototransistor in series with all of those resistors on the left side and for your V-in use the wiper of a potentiometer so you can calibrate your "meter", of course connect the two outer pins the same voltage as the phototransistor is and you input will be the middle "wiper" pin. For the op amps you could use the NE5532 (You can get them cheap here along with everything else you need http://www.taydaelectronics.com/ne5532-5532-ic-dual-low-noise-op-amp.html) and make sure all the resistors on the left side of the pic are the same value. And for the LED resistors you can use an online calculator for your LED's. As for your voltage source I would use a simple 9v battery but really anything 5-15vdc will work. Hope this helps let me know if you get it to work or have other questions 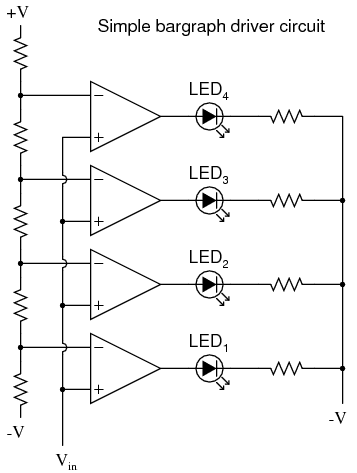 lostminty said:
yeah I am a little aware. They're voltage controlled switches in this example?

I don't see how this is supposed to work, even if you switch the battery polarity.

OK, I have a stronger idea of what I am trying to achieve and will try my darnedest to articulate its requirements:

Yes, it is essentially a voltage meter. I'm not sure of the range of voltages involved, 1-2V approximately. Would need to be able to fine tune the sensitivity of the circuit.

I would like to light up LEDs that indicate the voltage independently, ie only one at a time.

I am using an LED as the photo-diode, this is, as far as I understand, to restrict the wavelength range that the circuit will respond to. I am not sure as to the linearity of the response for the LED. It is effectively a make shift spectrophotometer. I have an LED of a certain wavelength on one side of the sample, and the receiving LED (photo-diode substitute) on the other side.

I'm using it to measure concentration of a particular compound in the sample. Beers law predicts a linear relationship between absorbance and concentration.

I've played around with a test jig, and found the response voltage of the LED to be approximately linear. Ranging from 1.3V for a high concentration to 2V for negligible concentration.
lostminty

This circuit seems nearly perfect from what i can gather

According to the spec pdf, if i open up pin 9 it should go into dot mode.
Share:
Share