I'm trying to control the speed of a fan (12V cpu cooler) with PWM (555 + MOSFET).
Should be quite straightforward, but i noticed that the speed of the fan does not seem to always change in the same way the duty cycle does.

Even better, that 60% peak is higher that the RPM of the fan just hooked up to the 12V directly, while 100% is less than that.

An LED hooked up to the same controller seem to change brightness linearly.

What is causing such a strange behaviour?
Or rather, how to fix it? 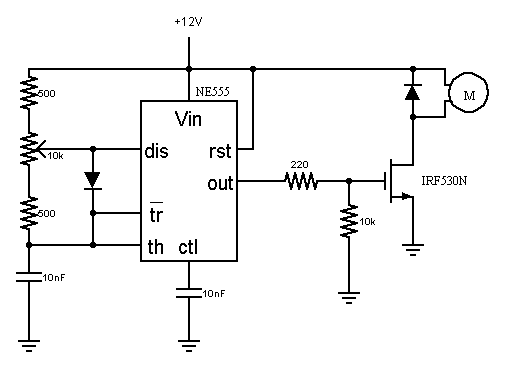 Sounds odd indeed, with those resistors and pot your duty cycle should be within ~5-50%.

Do you have access to an oscilloscope? I would have a look at the gate-source voltage of your MOSFET to see what it's actually doing. It's probably hard to judge visually with the LED if there's any problem with your switching waveform.

Your fan is no ordinary motor, it is a brush-less DC motor with some controller chips on board. So, I am not sure its safe/good to PWM control it. The Odd behavior has got to do something with the BLDC motor controller on your fan.
milesyoung

The electronics in that fan motor is in all likelihood completely "dumb" and only handles commutation:
AVR442: PC Fan Control using ATtiny13

You might have a super weird fan motor but the PWM scheme in your circuit has always worked for me.
NascentOxygen
Staff Emeritus
Science Advisor

You could try a power MOSFET charging an electrolytic capacitor from the + rail. Your motor could be connected across that electrolytic.

You can get the same effect by connecting an electrolytic across your motor terminals in the arrangement you have. Current pulses may be higher than anticipated.
Artlav

I_am_learning said:
brush-less DC motor with some controller chips on board.

Looks like that's what the problem is - the fan is too "smart".
I tried a "dumber" fan with only 2 wires, and everything works nicely.
The new fan won't start spinning unless given nearly full power, but once spinning it can be throttled up and down cleanly.

B
PWM for motor control

F
Controlling a Motor with PWM

A
Is PWM for control of Peltier Element logical?