I have been assigned by my tutor to design a hydraulic guillotine (rubber bale cutter).
After designing its features of the hydraulic, cutting blade etc.

I tried to calculate the force needed of cutting a piece of Rubber bale (Natural as reference) having an ultimate tensile strength of 30 MPa (Shear strength assumed to be equal to tensile).

The maximum thickness of the rubber bale is fixed to 120 mm and width of the bale is 350 mm.
This set up would cater for the maximum cutting action since rubber material is spread all over the blades.

Using this equation the cutting force would be ridiculously large, 1260 kN or 128 Tonne.

But a normal rubber bale cutter has maximum 12 - 15 Tonne.

Can someone please point me in the right direction or correction ?
Books, examples and explanations are appreciated.

The force to push the blade through the product is almost entirely due to friction between the sides of the blade and the product. You can demonstrate this by cutting a piece of rubber hose or vinyl tubing with a sharp knife. First, lay the hose flat on a board and push the knife through with a slicing motion. Second, bend the hose into a U-shape and cut into the outside of the U.

There is no good way to calculate the cutting force of rubber, so you need to either run a test or get values from existing machines. For the wax paper guillotine, we mounted a blade in an arbor press, then measured the cutting force by pulling on the press handle with a spring scale.
JBA
Science Advisor
Gold Member

Look online at some pictures of guillotine blades and you will see that they sloped so that they cut only a portion of the width of an article at any point of their travel. Doing so on your your cutting edge will considerably reduce your required cutting force; but, this style of blade requires a slotted table for the blade to slide into below the material and this could be an issue for the support of a flexible rubber material. An alternative might be to design your cutter with a cutting wheel (like a pizza cutter) that rolls across the table as it cuts the rubber and will have the same cutting force reducing property as the sloped guillotine blade.
vivek_salman

Thank you for your Info.

Could someone help me to add this calculation of Guillotine blade with cutting force calculation?

Any reference regarding this complete calculation.

vivek_salman said:
The equation I used was: F = A x Ss

Are you shearing the whole block at once?
Maybe you should use the width of the cutting edge of the blade.
Last edited: Sep 6, 2019
256bits
Gold Member

Here is an expose on cutting agar, a soft solid, which indicates that slicing action of the blade on deformable materials is recommended.
https://physics.aps.org/featured-article-pdf/10.1103/PhysRevLett.109.244301
vivek_salman 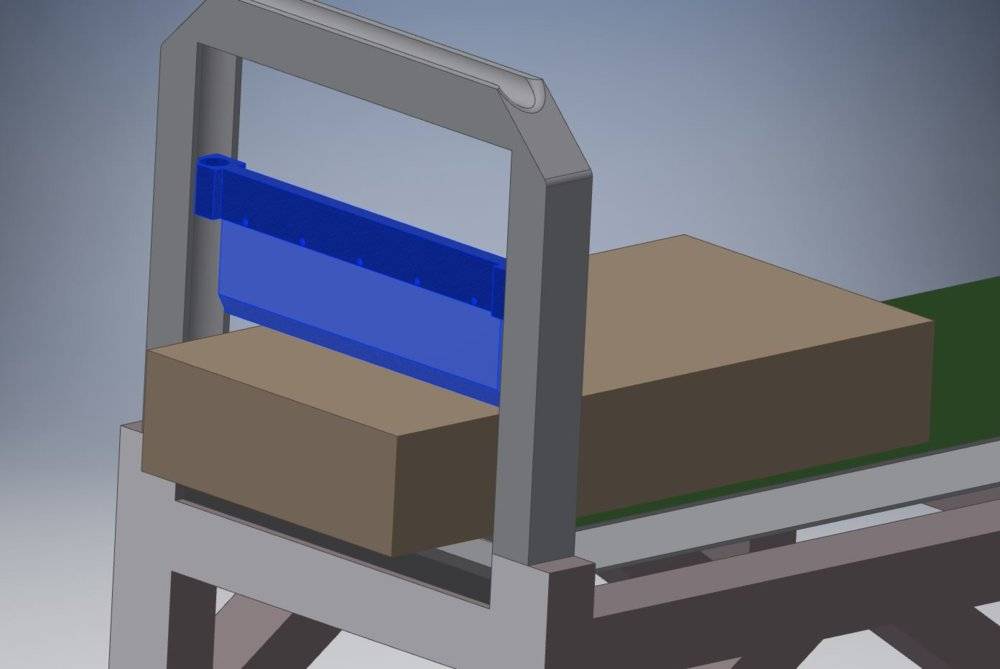 this rubber bale is 750 x 350 x 120 mm.
I want to cut it horizontally where cross section or cutting edge is 350 mm and thickness is 120 mm.
JBA
Science Advisor
Gold Member

" This occurs through the slicing action of a blade which creates a critical local tension at the surface with minimal global compression of the bulk, while pure normal loading involves strong global deformation before fracture initiation and leads to material damage. In practice, sliding might limit the efficiency of this process, so that when cutting soft solids, we must impose a minimal normal force that enables fracture nucleation due to slicing. The same principle that holds for paper cuts also plays a role in the macabre guillotine: the angled blade is designed to slice through flesh sharply and do so with minimum resistance rather than squeeze it. "

The above quote also states that a normal (90°), i.e. blade flat to the material, cutting imposes the greatest required cutting force, as shown in the graphs in the report, and leads to material damage.
jrmichler
Mentor

Stacks of paper are commonly trimmed to size using a guillotine. The stack is compressed by a platen, then the blade comes down at a 45 degree angle. The blade is parallel to the surface of the paper stack. Paperback books are trimmed to size by guillotine trimmers, and sometimes you will see 45 degree lines in the edge where the blade has a small nick in it.

I have also seen stacks of paper cut using a guillotine, where the blade travels vertically. The blade is parallel to the stack surface as shown in Post #7. One of these was the guillotine mentioned in Post #2, another was a machine for removing waste paper from steel cores, and one was a cutoff for air filter material.

The air filter material cutoff cut against a hardened steel roll. The depth of cut was VERY carefully adjusted to get a clean cut without dulling the blade. The waste paper guillotine was operated to cut almost to the core, with the last few layers removed by hand. All other paper cutting guillotines, both the 45 degree and vertical cutting, cut against a plastic block. As the blade sharpness decreased with use, the depth of cut was adjusted deeper, until the blade needed to be removed. A new blade was installed, and the plastic block flipped so the blade could cut against a new surface. The block was square and installed so the blade hit off center, so could be rotated and/or flipped 8 times before needing replacement. I believe those blocks were usually Nylatron, although UHMW may also have been used.

Shear stress on a bar

Shear stress in a pinned shaft

Shear stress on a piece of Chalk