Hey,
Im in the process of building my final project for an engineering electronics course.

- Anyone have any good links regarding helping pick BJT, Jfet or Mosfet for pre-amp stage? I know from recording music they sound different but does anyone have any technical papers or good explanations?

- I don't know which I should build for driver stage. Its recommended to do a BJT push pull a/b amp. Since I'm a recording/guitar guy I really like tubes. Anyone have any low wattage tube driver schems?
Any recommendations would be appreciated.

- I don't know which I should build for driver stage. Its recommended to do a BJT push pull a/b amp. Since I'm a recording/guitar guy I really like tubes. Anyone have any low wattage tube driver schems?
Any recommendations would be appreciated.

When you say "driver stage" I think you mean output stage. Usually, a driver is the stage before the output.
If you want to use a tube output, very good audio can be obtained for small powers from a single ended beam tetrode in Class A, such as the EL84, without using push-pull. But if you want to over-drive the output stage intentionally to obtain a traditional electric guitar sound, I believe the use of triodes is recommended so that the overload point is more gradual. Such tubes, however, involve much more cost and a more complex driver stage as the drive requirement is much greater. Incidentally, as an engineer, I am not prepared to accept that things sound different when I cannot see it on a CRO.
jim hardy
Science Advisor
Gold Member
Dearly Missed

RCA Tube Manual has a LOT of hobbyist audio circuits in last section. Below is a snippet from the RC30 edition of RCA Receiving Tube Manual which i downloaded from someplace. Google or Bing will find it...
You will find the tubes and transformers pretty expensive nowadays .
If you can find a trove of old not working tube radios and TV's to pillage it'd help. 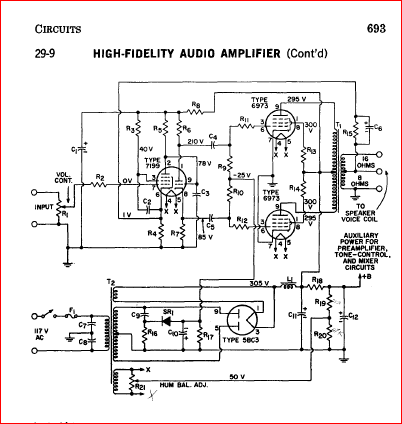 Everybody uses integrated circuit amplifiers these days. Look up LM386.
You can buy throwaway computer speakers for just a couple bucks in thrift stores.
I learned a lot by taking them apart and looking up datasheets for the IC amplifiers inside.

GE's transistor manual from about 1964 is a good "how to" book for bjt circuit design. It too is out there in pdf.

Good luck in your studies,

The push pull amplifier shown will have less even order distortion than my suggestion for a single ended Class A beam tetrode. However, I would, be very surprised if this is audible or objectionable, and the additional complication and cost is very great.
I think the LM386 does not give good audio, due to distortion and noise.
jim hardy
Science Advisor
Gold Member
Dearly Missed

tech99 said:
The push pull amplifier shown will have less even order distortion than my suggestion for a single ended Class A beam tetrode. However, I would, be very surprised if this is audible or objectionable, and the additional complication and cost is very great.

All 3 of those points are true.

That amplifier had wonderful sound.

I have long believed that the highly controversial "Tube Sound" arises not so much from "distortion" attributed to tube amps
but from the difference in speaker cone response when driven by a current controlled source versus a voltage controlled source.
SInce amps are usually lab tested with a resistor load that difference gets missed because V = IR and R is constant.
But for a speaker, V = IZ and Z includes inductance, mechanical inertia, spring constants of speaker cone and air in the enclosure.
So the current through and voltage across a real speaker in a real enclosure in a real room will have different waveshapes.

A pentode tube being basically a current source will deliver to a real speaker load a different voltage signal than to a pure resistive load. That would look like distortion on an o'scope . But they're usually tested with a resistor load so it doesn't show up in reviews.

I am a "Transient Intermodulation Distortion" denier . It's the complex Z.

Here is an article from a respectable engineering publication that goes further into the subject:
http://www.edn.com/design/consumer/...periority-of-current-drive-over-voltage-drive


There cannot be found any scientifically valid reasons that justify the adoption of voltage as the control quantity - it is only due to the historical legacy originated almost a century ago, most likely by cheapness and simplicity; the quality and physical soundness of operation have not been considerations in this choice. Engineers are also more accustomed to identifying electrical signals as voltages rather than currents.

At least the hi-fi community should be interested and able to better see through this discrepancy. But they too have taken the state of affairs as a given, being largely conditioned to the wishful thinking that tightly held voltage somehow "controls cone motion," even up to middle and high frequencies. Such a notion doesn't have real scientific grounds, and it can be clearly shown by basic analysis and modeling that any damping effects that voltage drive can have on driver operation are strictly limited to the bass resonance region.

And another from a hi-fi writer who did quite a bit of actual testing ,
http://www.firstwatt.com/pdf/art_cs_amps.pdf

Conclusion
So here you have it – a re-examination of some things that have been known for a long time
but were here tested with currently available drivers. It’s easy to dismiss the older ways.
Somewhere in the 1960s, the speaker/amplifier interface took a left turn and headed off to
high-power voltage source amplifiers and speakers designed to lean on them for
performance. A small group of iconoclastic cranks has stayed interested in these fossils and
in the end, we have to recognize full-range high-efficiency speakers as offering elegance,
charm and a different sort of quality.
Current sources and amplifiers with low damping offer interesting possibilities for
improvement with these drivers but they require considerable work to get the enclosures,
electrical networks and acoustic environment just right. Remember, you don’t have to own a
current-source amplifier to put this information to work. Placing R0 in series with the output of
a powerful voltage-source amplifier instead of in parallel with a current source will give similar
results. If R0 is 47 ohms or higher, you are going to want a big amp, say 300 watts, but in any
case, be certain to use a high power resistor of 50 watts or more. That said, it’s all just
entertainment and I hope it inspires some of you to have some fun.
Bon Appetite.

He's a "true believer" in current source amps, see his site
(CAVEAT - he appears to sell them and this is NOT an endorsement,
i dont own one, just i find the concept interesting) 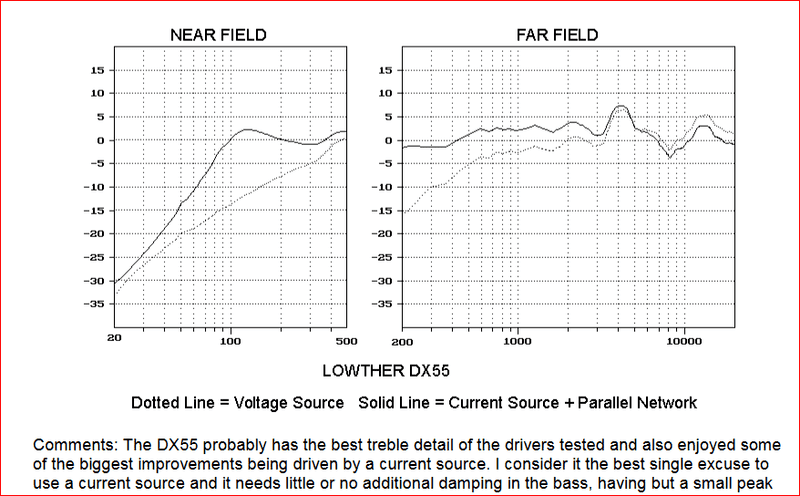 Indeed. Having been in a little rock band in the '60s and poor, we had to build our speaker enclosures; different speakers, different sounds. To bad these speakers didn't have today's magnets. A little off topics but, with tubes & speakers your can get an added dimension from the Leslie speaker ... most commonly associated with the Hammond organ, ...
jim hardy
Science Advisor
Gold Member
Dearly Missed

dlgoff said:
A little off topics but, with tubes & speakers your can get an added dimension from the Leslie speaker ... most commonly associated with the Hammond organ, ...

so THAT"S what that crazy rotating speaker contraption was !
I ran across one in a junk-pile, wondered "what the heck ?" and left it there....
Weightofananvil

I worked out of a recording studio that had a working hammond and leslie speaker.
I used the leslie once to give effect to an acoustic guitar part once. It was real neat.
But I think moving that thing in the studio weighed more than my car.

Thanks for all the information.

If I stray from valve (since I have a time constraint)
what is a backup plan for a power stage?
I was thinking push-pull discrete transistor but am open to suggestions.
(again simpler)


-This information is amazing though because one of my summer projects is refurbishing a tube amp I ripped out of a old vinyl cabinet.
If Its not really worth saving, I'll probably just build one. I am researching the math involved though as I'd like to learn tube design instead
of just whipping a circuit together.

Need Some Guidance For Testing Process On Vacuum Tube Amp
3

Need ideas for a LED Pilot light for a tube amp