Homework Statement:
This is one of krotov's problems:
A bank of two series-connected capacitors
of capacitance C each is charged to a
voltage U and is connected to a coil of inductance L so that an oscillatory circuit
(Fig. 114) is formed at the initial moment.
After a time t, a breakdown occurs in one of
the capacitors, and the resistance between
its plates becomes zero.
Determine the amplitude of charge oscillations on the undamaged capacitor.

krotovs solution is based on energy conservation. My question is that why the solution didn't consider inductors energy?
the question: 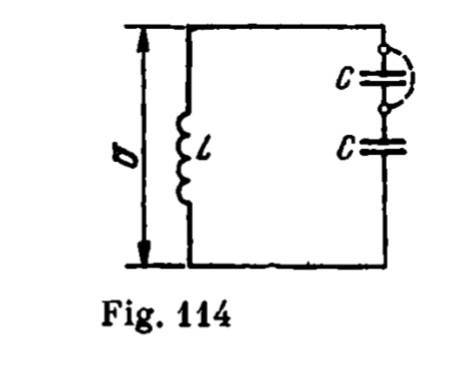 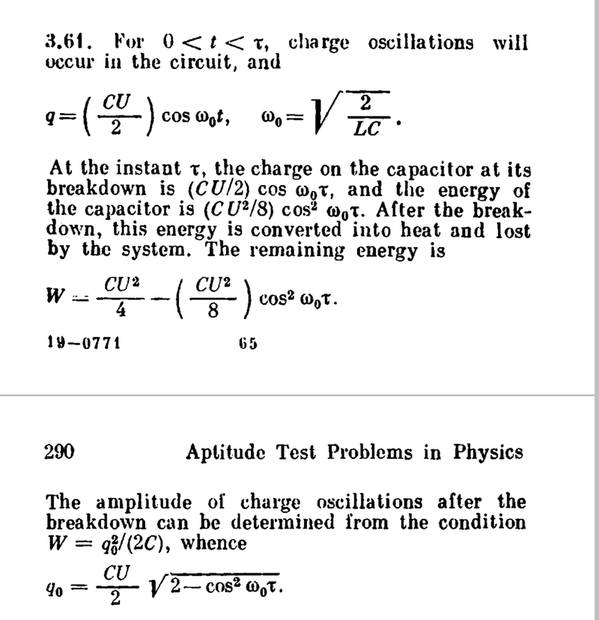 Physically it is because the inductor energy depends only upon the current flowing through it. When the capacitor shorts out the current in the circuit is not immediately changed, except within the unfortunate (and now very warm) capacitor. The subsequent evolution of the current will change because the energy heated the now-shorted capacitor. Does that help?
DaveE
Science Advisor
Gold Member

He must be assuming that the capacitor breakdown is much quicker than the response time of the LC resonator, so the inductor current doesn't change.

However, the phrase "the amplitude of charge oscillations after the breakdown" is confusing. The only oscillations in this circuit must include the inductor, RC circuits don't oscillate. To find the peak capacitor energy ("amplitude of charge oscillations"), you would have to include the inductor energy. Alternatively, you could just describe the charge on the capacitors immediately after the fast breakdown event, which should be zero for one and unchanged for the other (as I interpret his problem).

Yet another example of a poorly worded problem. I guess he's describing the nature of the initial transient and asking for the LC response following that event?
kuruman
Science Advisor
Homework Helper
Insights Author
Gold Member

ermia said:
My question is that why the solution didn't consider inductors energy?

Krotov says, that the energy of the damaged capacitor at breakdown is half of ##E_C(\tau)## whatever that value is. The balance, ##E_0-\frac{1}{2}E_C(\tau)## is the energy left in the intact capacitor and the inductor. If the breakdown occurs when ##\omega_0 \tau=\frac{2n+1}{2}\pi## (##n## = integer), all the energy is in the inductor and that is implicit in Krotov's equation for ##W##.
TSny
Homework Helper
Gold Member

You might find it worthwhile to think about the mechanical analog of this system: a mass-spring system with two parallel, massless springs and no friction:

At some arbitrary time ##\tau## one of the springs snaps so that only the other spring is operational.

Conservation of Energy with Mass on Hemisphere

Signs of the voltage drops in this LC Circuit

Question about the conservation of mechanical energy

Oscillations in an LC circuit (Question from Irodov)

Krotov problem: how to write Energy conservation for this fluid?

Equation Demonstration -- Comparing a pendulum's motion to an LC circuit