All the Wild dang We're Going to Do in Space and Physics in 2018 (forum censors the original title)
Featuring all the interplanetary probes and various missions and milestones closer to Earth, the Event Horizon Telescope, Gaia, and a couple of things not directly related to space or spaceflight.


Falcon Heavy is vertical on its pad. 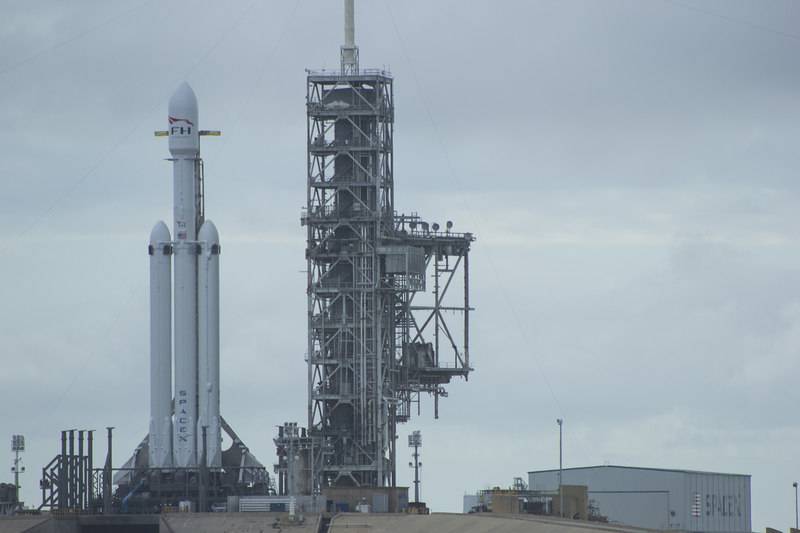 
Angola's first satellite failed quickly after launch, by the way.

"A joint effort between the European and Japanese space agencies, called BepiColombo, will see a spacecraft launched towards Mercury in November.

Artist’s impression of BepiColombo in orbit around Mercury. (Image: ESA)

After it arrives in late 2025, the craft will deploy a pair of orbiters: the Mercury Planetary Orbiter (MPO) and the Mercury Magnetosphere Orbiter (MMO)."

Reaching the Mercury orbit is hard, you have to get rid of a lot of angular momentum. Wikipedia has a timeline.
Stavros Kiri

mfb said:
Reaching the Mercury orbit is hard, you have to get rid of a lot of angular momentum. Wikipedia has a timeline.

"after a flyby of Earth, two flybys of Venus, and six flybys of Mercury."
That explains it. Otherwise it wouldn't make sense.
mfb
Mentor
Insights Author

Its payload, up to 63,800 kg, is more than twice the payload of the most powerful rocket in operation, the Delta IV Heavy.

There will be a livestream. I don't know what exactly they will show because there will be so many things going on: The two side boosters will return to the launch site and land nearly simultaneously, the core will land on a barge in the ocean a bit later, meanwhile the second stage will push Musk's car on an interplanetary trajectory.
Borg
Science Advisor
Gold Member

mfb said:
the second stage will push Musk's car on an interplanetary trajectory

I can't help but be reminded of the opening scene of the movie Heavy Metal.

mfb said:
The Electron rocket had ignition already, but the attempt was aborted, and after a few more delays the launch was shifted to the first quarter of 2018. We still get the second attempt to get SS-520 in orbit after the failure in January, unless that is shifted as well.

Both launched and reached orbit in the meantime, SS-520 today.

Electron is the first rocket with an electric turbopump to reach orbit, and the first orbital launch from the southern hemisphere in several decades. RocketLab claims they can launch more than one rocket per week, targeting the small satellite and cubesat market with the payload of up to 200 kg. The Electron rocket has a mass of 10.5 tonnes.

SS-520 is the smallest and lightest rocket to ever reach orbit, with a total mass of just 2.6 tonnes, a height of 9.5 meters and a diameter of just 52 cm. You might be able to reach fully around it with your arms (163 cm circumference). It can deliver just 4 kg to orbit - still enough for a cubesat that doesn't find a launch opportunity elsewhere.


SpaceX plans to do about half of the planned 30 launches in 2018 with reused boosters.

Neat simulation of the Tesla roadster and driver in space.

Link to watch live at, https://www.space.com/39594-spacex-falcon-heavy-maiden-launch-preview.html 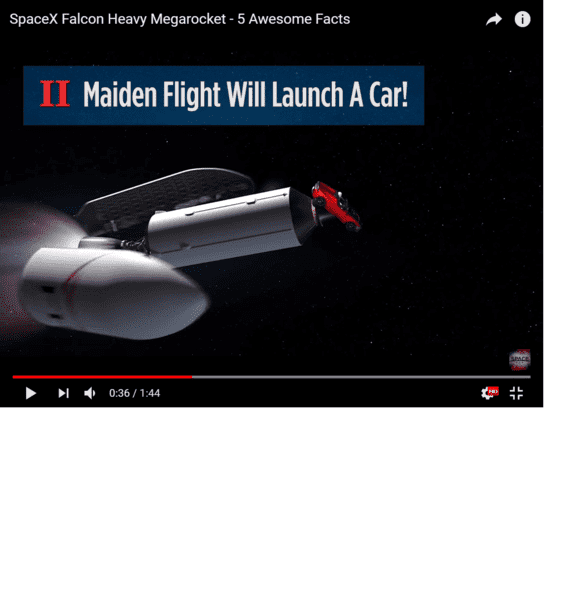 That link so far is just animations (maybe it will switch to live coverage closer to the launch).

The launch window stretches from 1:30 to 4 p.m. EDT (1830 to 2100 GMT). You can watch the launch live here on Space.com, courtesy of SpaceX, beginning at 1:10 p.m. EST (1810 GMT). Weather conditions are currently at 80 percent "go" for today, and 70 percent for a backup launch time tomorrow, according to the 45th Space Wing's Weather Squadron, which monitors weather for air and space operations at Cape Canaveral Air Force Station and Kennedy Space Center.

Launch is now scheduled for 2:50 EST.

UPDATE FOR 12:16 pm ET: SpaceX's first Falcon Heavy megarocket will launch on its maiden flight today, Feb. 6, at 2:50 p.m. EST (1950 GMT). Watch it live here in a webcast provided by SpaceX. You can watch directly from SpaceX's website here. The launch webcast will begin at 20 minutes before liftoff and the launch window runs through 4 p.m. EST (2100 GMT).

Seems to be a predicted "go", so far:

Has not blown up yet, 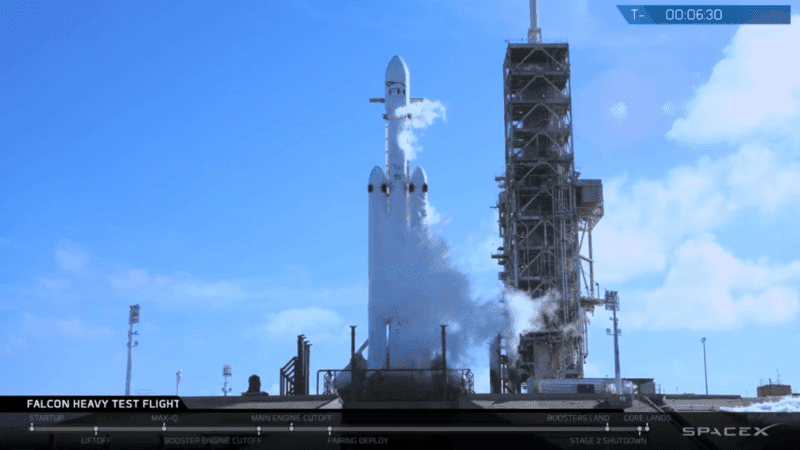 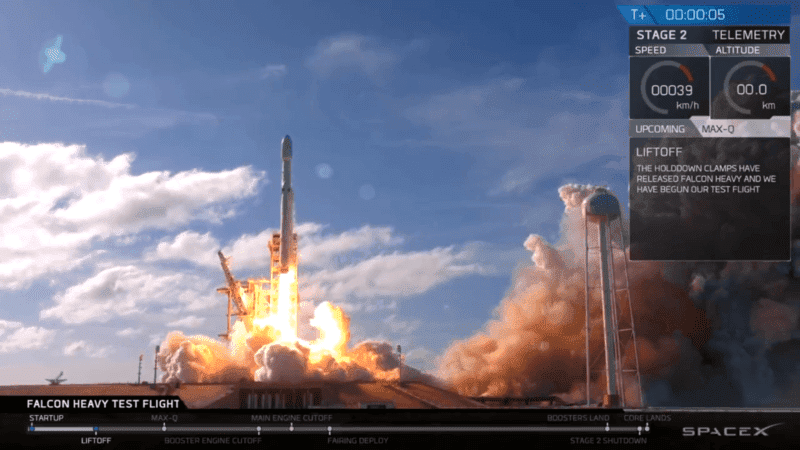 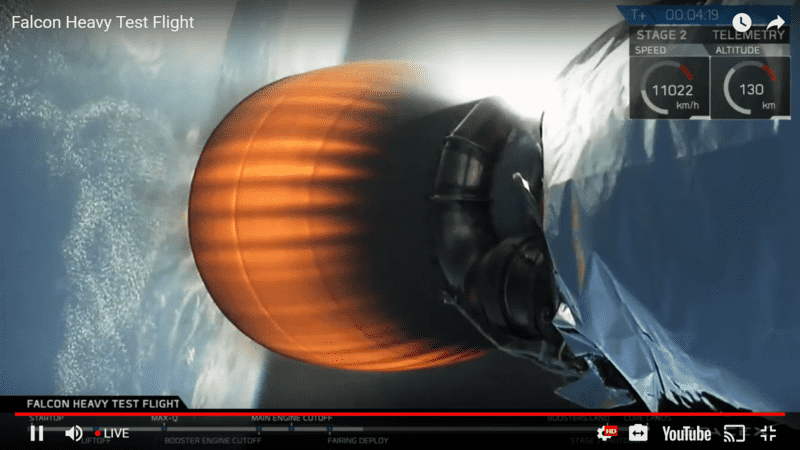 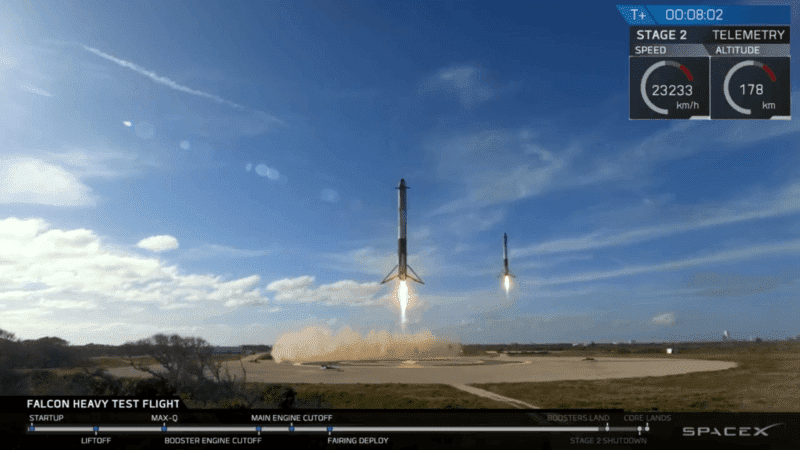 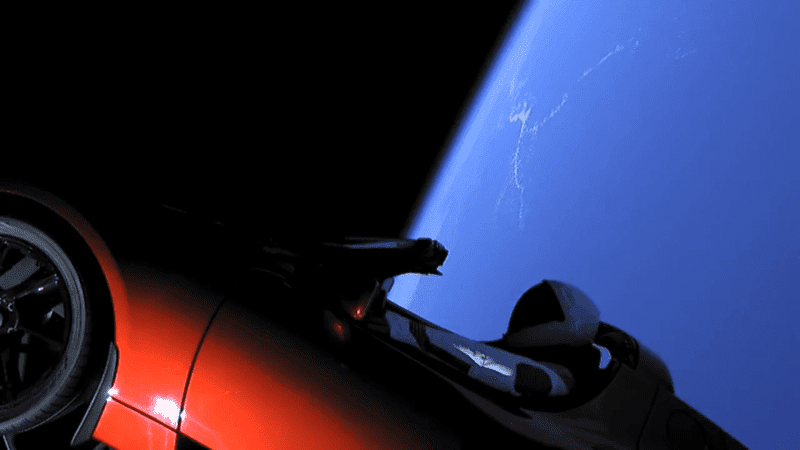 The shots of the car above earth is hilarious and stunning!
mfb
Mentor
Insights Author

The simultaneous landing of the two boosters was amazing.

The mission is not fully done yet, the second stage will fire again in about six hours. It is still an important step: It demonstrates that the second stage now survives long enough to do direct insertion to geostationary orbit if the customer wants that.
davenn
Science Advisor
Gold Member
2021 Award

NO ... it was live
OmCheeto
Gold Member

Apparently, we are still live:

I stand corrected, quite an amazing feat to land boosters upright for another days use.
boneh3ad
Science Advisor
Insights Author
Gold Member

It seems they lost the core stage.


Edit: I tried to have the video start at 1m 44s for the relevant part but that doesn't work with embedding.
davenn
Science Advisor
Gold Member
2021 Award

who else noticed the reference to " The Hitchhikers Guide To The Galaxy" ? 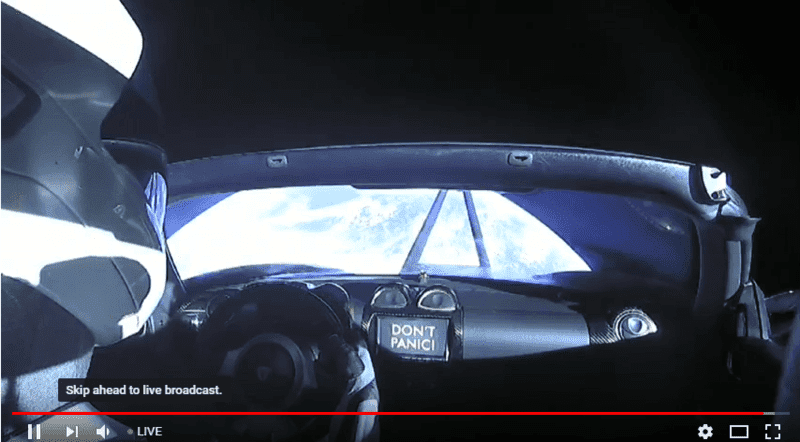 "the reference"?
The glovebox has the book - and a towel, of course.
TurtleMeister

This is great news. It's good to see this type of thing back in the mainstream news. Talk about the launch being at the same pad as Apollo 11 brings back memories. I was there in person back in 69 to watch it. I still have vivid memories of the sights and sounds.
Share:
Share