Trouble with elasticity and torque on a body in equilibrium

Supose we have a ¨U-shaped" metal bar, stuck in the ground, and I aply a force on the top of the part on the right, trying to make it wider. If I were to avaliate the forces acting on a specific part of the bar that includes the point that I´m applying the force, let`s say the portion from that point to half the height of the U-shaped bar, there would be 2 forces on the horizontal direction (ignoring the weight): my force and an elastic force from the metal bar (It will deform a little bit until it matches my force). But, if I were to avaliate Torques acting on that portion of the U-bar, and If I took the reference point on any of the points which the one of the two forces are acting, there would be a resultant torque, wich is impossible, since it`s in equilibrium. Where have I got this wrong? And why?

I think you need a diagram. I'm not sure I understand your problem.

If you have no special software, you could use a simple Paint program and attach a .png file to your post.

avaliate - I think you mean evaluate

I think you are not considering all possible forces. I've quickly added more on a diagram,( though I can't say they are accurate or complete.) 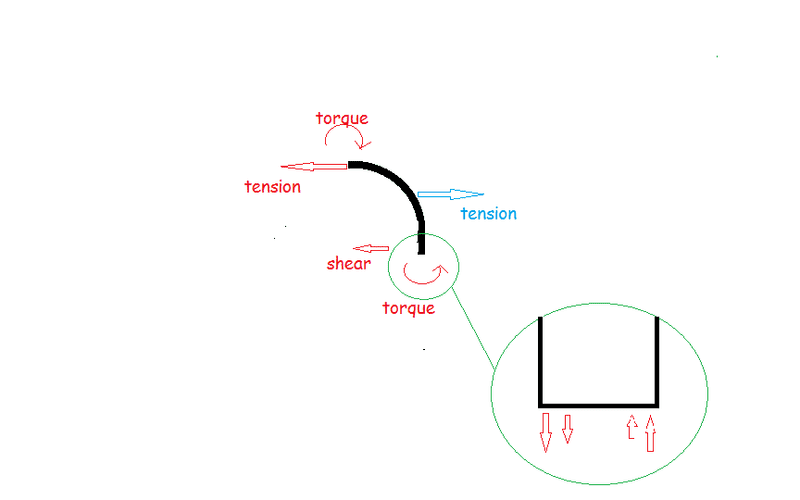 I believe the answer is that the part in the ground is not a single "point" that you can take as the origin. Rather there is a "length" of pipe in the ground. What ever point you choose as origin there will be a force acting on the bit in the ground to provide a torque.

This is true even if the bit in the ground is curved like the bottom of the letter u.
Log in or register to reply now!

A question about elastic collision of bodies.

I Impact of two elastic bodies

A question on elasticity