Understanding why an angle is the same as another one?

My teacher told us that on an inclined plane, the angle the weight of a block makes with the parallel force is the same as the angle of the inclined plane, in this case 29°. Why is that? I know it has to do something with similar angles, such as those in the shape of a Z or F, but I can't find the shape to justify these angles. Thanks for your help!
Last edited by a moderator: May 3, 2017

Think of two rigid coordinate systems, the one characterised as horizontal&vertical, the other as tangential&normal.

But, and this is the insight to be drawn directly relevant to your question:
Therefore, the angle the TANGENTIAL axis makes with the horizontal axis, must be the same angle as the angle between the NORMAL axis and the vertical axis! It is a single rotation that has been made, and the magnitude of that rotation is given by the angle of how much BOTH axes has been rotated with respect to the "standard" horizontal&vertical coordinate system.
mace2 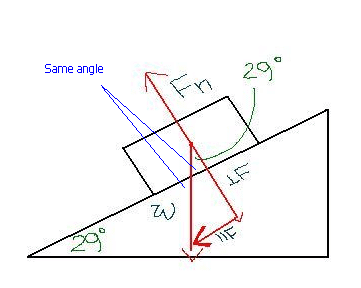 Hopefully that's clear enough (I just added to your drawing). Since they're both right angle triangles, the angle must be the same.
cherryrocket

Hey I finally get it! Thanks alridno and mace2!
Log in or register to reply now!

Related Threads on Understanding why an angle is the same as another one?

Why the kinetic energy is same as internal energy of ideal gas?

Why does light bend when passing from one medium to another

Why the current in a loop is the same

Why is atmospheric pressure the same indoors?

Atoms and electrons when one object is rubbed on another

Decanting one tank into another

Why the frequency in both shallower and deeper part is the same?

Is it the same as sublimation?

Why is voltage the same in a parallel circuit

Is "energetics" the same as "thermodynamics"?