I live in western Ma and found this by the Connecticut river one day...I was wondering if anybody could tell me what it might be from 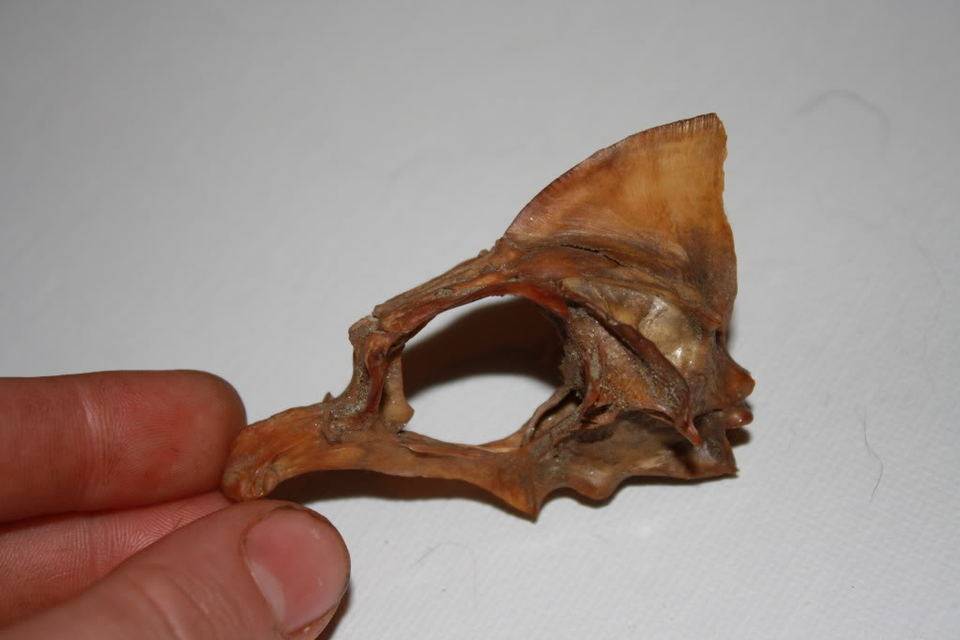 your links are broken
BodhiCat

I fixed it. I have other pictures too if they may be helpful
Insanity

other pictures would be helpful, particularly from other angles. it is difficult to determine if it is a skull or another piece of bone from this image.

most skulls have opening other then the eye socket, and I don't immediately see that here.
Last edited: Sep 9, 2010
cronxeh
Gold Member

No idea! The large saggital crest suggests a critter with strong jaws.
Insanity

the upper jaw seems too small for a strong bite though.

Any qualms if I share these with someone who is more likely to have specimens to compare with?
hamster143

I think it's a bird, looks a lot like loon skull (without a beak). But that sagittal crest is HUGE. Loons are among the few birds that have sagittal crests, but that seems too much even for them.
hypatia

Both the Opossum and the Fisher have large sagittal crest, much like the photo.
turbo
Gold Member

I don't know what an opossum skull looks like, but a fisher skull is rather short an very powerful with sturdy jaws and lots of teeth. This skull looks like it could belong to a bird with attached (non-integral) beaks. Still at a loss though.
hamster143

hypatia said:
Both the Opossum and the Fisher have large sagittal crest, much like the photo.

Wrong muzzle shape for both the opossum and the fisher, though. The narrowing above the eye socket (clearly seen in IMG_3634.jpg) would be consistent with having salt glands, indicating a marine bird.
Insanity

I am not aware of any mammals that have a pronounced crest like that. In mammals, a large sagittal crest is a sign of large chewing muscles, yet what looks like the upper jaw seems to small for that.

A hornbill has a large crest, but it is rather thick and heavy vs. the thin one here, and it is in front of the eyes, vs. behind.

A cassowary is another bird with a crest, but it too begins in front of the eyes and is a thick heavy crest.

Neither one of them is good match for this skull in my opinion.
Last edited by a moderator: May 4, 2017
Proton Soup

found this, but not educated enough to make use of it

After going through this site,
Code:
,[/PLAIN] [Broken] there are a few bird species that do have any sort of bony crest, but none seem to be a match to this skull.

Related Threads on Unique skull found by river, Anybody recognize?