What kind of thermos do you have?

Thermo is a container to contain hot water used at home. What is the other term for it? Do yours have plastic inside or glass? I'm just worried the plastic chemicals may be released from the boiling water. Note this is not room temperature water. What is the safest thermo.. isn't the plastic based carcinogenic or can cause health problems? Thank you

You can find other names for a thermos in the wiki article or via google search:

mieral said:
Do yours have plastic inside or glass?

Haha, glass. Remember those? Do they still make those? I think I had a Batman thermos when I was in grade school in the 1970's. Kids used to drop them all the time and the glass inside would break. I would always shake mine a little before I poured a drink to listen for the rustling of broken glass inside... 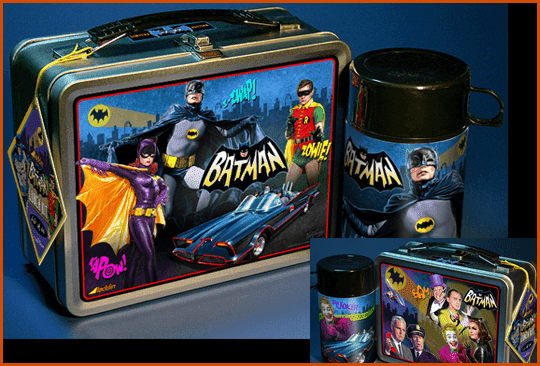 These days I use a ceramic-lined mug (bubba). Works great. Even better than stainless steel which can impart a little metallic taste. I would stay away from plastic even if it does say BPA free. Ceramic is about as safe as it gets and it keeps the coffee hot hours longer than the plastic travelmugs. It's a little more expensive, mine was $25, but it's well worth it just in the coffee you don't throw out because it gets cold..

But I'm looking for 40 oz boiling water container for use in home. You know.. where it holds boiling water for the entire family.

But about the term vacuum flash. It's not really vacuum.. is it? why is it called vacuum?
jedishrfu
Mentor
Insights Author

I have something similar to it.. but notice the mouth where the water flows is still made of plastic.. not ceramic.. i'm looking for one to simply store hot water in house that doesn't require this ability to boil it.. what do you guys use? don't you use simple hot water container at home?
Last edited by a moderator: May 8, 2017
256bits
Gold Member

Nope.
A kettle with new water that does not stand around all day.

Ceramics can leach metals, depending what is in it and what temperature, and type of ceramic.
A study from New Zealand, for example,
http://researchcommons.waikato.ac.nz/handle/10289/8502
Mark44
Mentor
Insights Author

mieral said:
But about the term vacuum flash. It's not really vacuum.. is it? why is it called vacuum?

Here's a drawing of the cross-section of a vacuum flask. The outer shell is not shown. 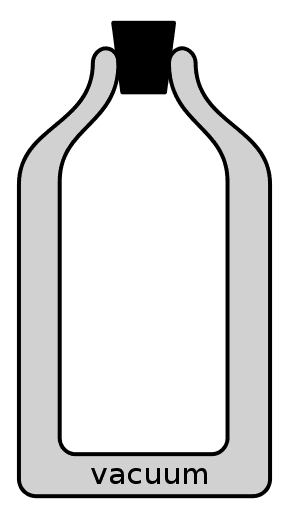 256bits said:
Nope.
A kettle with new water that does not stand around all day.

Ceramics can leach metals, depending what is in it and what temperature, and type of ceramic.
A study from New Zealand, for example,
http://researchcommons.waikato.ac.nz/handle/10289/8502

What do you mean ceramics can leach metals.. where will the metals come from? I'm talking of this ceramic jar someone shared earlier whose kinds plan to get but want to get this leeching thing clarified first. thanks. https://www.bedbathandbeyond.com/st...e=&network=s&gclid=CKrl9KPayNICFY6Iswod1cEBZQ
256bits
Gold Member

mieral said:
What do you mean ceramics can leach metals.. where will the metals come from? I'm talking of this ceramic jar someone shared earlier whose kinds plan to get but want to get this leeching thing clarified first. thanks. https://www.bedbathandbeyond.com/st...e=&network=s&gclid=CKrl9KPayNICFY6Iswod1cEBZQ

You can do a search of leaching from ceramics, such as from dinnerware and storage vessels.

The common example is leaching of lead into wine from a decanter made with lead glass.

Items made of lead glass may leach lead into the food and beverages contained.[20][21] In a study performed at North Carolina State University,[22][verification needed] the amount of lead migration was measured for port wine stored in lead crystal decanters. After two days, lead levels were 89 µg/L (micrograms per liter). After four months, lead levels were between 2,000 and 5,000 µg/L. White wine doubled its lead content within an hour of storage and tripled it within four hours. Some brandy stored in lead crystal for over five years had lead levels around 20,000 µg/L.[23][24] To put this into perspective, the U.S. Environmental Protection Agency's lead standard for drinking water is 15 µg/L = 0.015 parts per million.[25] Citrus juices and other acidic drinks leach lead from crystal as effectively as alcoholic beverages.[26][27] Under conditions of repeated use of the decanter, the lead leaching steeply decreases with increasing use. This finding is "consistent with ceramic chemistry theory, which predicts that leaching of Pb from crystal is self-limiting exponentially as a function of increasing distance from the crystal-liquid interface."[27] Lead leaching still occurs, but the quantity that leaches into a glass of wine or other beverage let stand for a few hours is much smaller than the quantity of lead consumed daily in ordinary diet. An ordinary diet contains about 70 µg of lead per day

I do not know the chemical composition of a ceramic lining.

I am pointing out that just because something is not plastic does not mean that it can have other issues of its own.
Dr Transport
Science Advisor
Gold Member

Stanley is the best thermos out there, I use one all the time, if I put boiling water into it for my coffee after preheating it, I can't drink my coffee for a couple of hours....

I have a personalized stainless steel thermos, it is perfect for keeping my hot drink hot for long time. Plastic chemicals increase the risk of cancer and interfere with brain development and fat metabolism.
Share:
Share

Related Threads on What kind of thermos do you have?

What kind of parties do you guys have?
2

What kind of sport/exercise do you do?
2

H
What kind of cars do you prefer?

What kind of car do you drive?
3

A
What kind of ball do you play with

News What Alternative kind of Government do you Support?
6

S
What do you have?

What kind of math test do you like best?