Where did all the Earths water come from?

I have no idea. I have never noticed anything like this myself, nor have I ever heard of it until now.
DoggerDan
I think water was around long before the Earth, at least according to http://news.yahoo.com/black-hole-sucks-140-trillion-times-worlds-oceans-163503124.html" [Broken]

It seems the Universe is predisposed to create water whenever H2 and O2 meet, at least if they meet with the relatively slight amount of energy required for combustion.
Last edited by a moderator: May 5, 2017
Drakkith
Staff Emeritus
Science Advisor

DoggerDan said:
I think water was around long before the Earth, at least according to http://news.yahoo.com/black-hole-sucks-140-trillion-times-worlds-oceans-163503124.html" [Broken]

It seems the Universe is predisposed to create water whenever H2 and O2 meet, at least if they meet with the relatively slight amount of energy required for combustion.

Lol, of course. I have no doubt that at least SOME water was around in the nebula that we were formed from.
Last edited by a moderator: May 5, 2017
DaveC426913
Gold Member

Drakkith said:
Lol, of course. I have no doubt that at least SOME water was around in the nebula that we were formed from.

ALL of it was around in the nebula we formed from. 100%.
Drakkith
Staff Emeritus
Science Advisor

Do you mean that the atoms that eventually formed all the water was in the nebula already, or that the actual water molecules were already formed? I'm guessing the former.
DaveC426913
Gold Member

Drakkith said:
Do you mean that the atoms that eventually formed all the water was in the nebula already, or that the actual water molecules were already formed? I'm guessing the former.

Oh, I see now what you were getting at.

Yes all the oxygen and hydrogen were around pre-Earth, but that doesn't necessarily mean it was all in the form of water yet. Got it.

One thing the OP should consider is that water is a very common substance in the universe, partly because its components are common and partly because those components have a huge affinity for each other (one of the strongest on the periodic table) which means they need little energy to combine (one of the reasons we use them for rocket fuel).
CowedbyWisdom

Some new info I found on Science Daily. Hope this is helpful.
MrGamma

Looks like the Swiss have invented technology which uses lasers to create rain with the available molecules in the sky.

The technique, called laser-assisted water condensation, sees laser beams create water droplets in the air allowing mankind to, for the first time, determine where and when rain falls. This could solve drought, famine and all sorts of climate change catastrophes. Except storms.

“We have not yet generated raindrops – they are too small and too light to fall as rain. To get rain, we will need particles a hundred times the size, so they are heavy enough to fall,” said Jérôme Kasparian, a physicist at the University of Geneva, writing in the journal Nature Communications.

Anyways... here is another article claiming red sprites have this much energy...


High speed photometer measurements show that the duration of sprites is only a few ms. Current evidence strongly suggests that sprites preferentially occur in decaying portions of thunderstorms and are correlated with large positive cloud-to-ground lightning strokes. The optical intensity of sprite clusters, estimated by comparison with tabulated stellar intensities, is comparable to a moderately bright auroral arc. The optical energy is roughly 10-50 kJ per event, with a corresponding optical power of 5-25 MW. Assuming that optical energy constitutes 1/1000 of the total for the event, the energy and power are on the order of 10-100 MJ and 5-50 GW, respectively.

And another article claiming the energy amount in the lasers used to create rain clouds...


The team, led by Jerome Kasparian, first tested the method in a lab setting. By shooting a 220-millijoule laser beam into a below-freezing, water-saturated chamber, scientists were able create clouds. To understand just how powerful that laser beam is, 220 millijoules is about as much energy as the intensity of 1,000 power plants!

So it occured to me last night, that Titan has clouds, and is probably extremely cold ruling out any chance of traditional explanation for cloud formation, as is said to be on the Earth, with evaporation.

Any ideas if there is lighting on Titan? I'm going to search right now...


Saturn’s moon, Titan, is unique in that it is the only moon in our solar system that has an atmosphere. That, in turn, has led scientists to ponder whether there could also be lightning on Titan. To date, no such phenomena has been detected in data collected by various space missions.

Alas, no such high-intensity electrical discharges have been directly observed by the electromagnetic sensors on board various spacecraft, including Europe’s Huygens spacecraft, the Voyager missions launched in the 1970s, and NASA’s Cassini spacecraft.

Seems possible... it did take them maybe 20 or 30 years to find lightning on Venus. Or the European Space Agency went back and found lighting.


Venus is a hellish place of high temperatures and crushing air pressure. The European Space Agency's Venus Express mission adds into this mix the first confirmation that the Venusian atmosphere generates its own lightning. The discovery is part of the Venus Express science findings that appear in a special section of the Nov. 29 issue of the journal Nature.

Anyways... just a thought... Have you guys seen the AWESOME maps of the Moon provided by the Japanese space program?
Drakkith
Staff Emeritus
Science Advisor

MrGamma said:
Anyways... just a thought... Have you guys seen the AWESOME maps of the Moon provided by the Japanese space program?

Can't say I have.
MrGamma

Yeah they are a unique look, sort of makes me second guess the vast differences between the front / back side, and the solar systems, "largest crater". 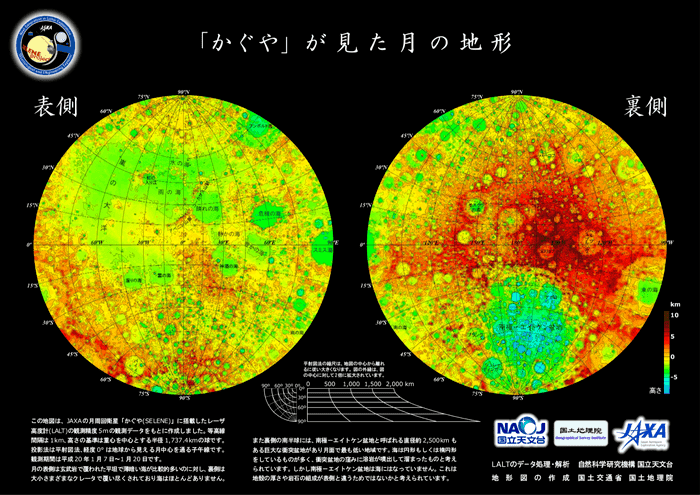 Anyways, here is a article explaining why water originating outside of the solar system may have grown to popularity, and an alternate view explaining it may be earth brewed.


the ratio of deuterium - or "heavy hydrogen" because it contains a neutron in addition to a proton - to hydrogen in our sea water matches the value found in water-rich asteroids, suggesting a common origin.

But Genda and his colleague Masahiro Ikoma suggest another possibility. They say the Earth could have had a thick atmosphere of hydrogen, which reacted with oxides in the Earth's mantle to produce copious water.

Also, chemical reactions favour the gradual exchange of hydrogen in water molecules for deuterium. Genda and Ikoma conclude from their calculations that that the oceans might well have been chemically manufactured right here on Earth.


"We saw the lightning," said Christopher Ruf of the University of Michigan in Ann Arbor, who first developed the new detector for use on Earth-orbiting weather satellites.

OMG... here is someone suggesting there is a form of lightning on the Moon...


A strong electric field near the surface was discovered by the Kayuga (Selene) lunar orbiter, managed by the Japan Aerospace Exploration Agency (JAXA).

JAXA launched the Kaguya probe in 2007. The craft orbited at a mere 62 miles (100 kilometers) above the moon's surface for 20 months, returning the first high-definition movies of the lunar landscape.

I mean it's probably nothing comparable to the Earth, however that's interesting... 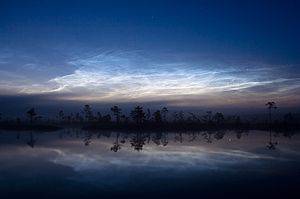 Oh, here is an article mentioning the amount of Hydrogen and Oxygen in the mesopause


Atomic oxygen and atomic hydrogen have been inferred from the hydroxyl airglow measurements on Solar Mesosphere Explorer (SME) spacecraft between 0.01 and 0.0013 mbar (80–93 km). This constitutes the first measurements of the seasonal and latitudinal variations of these atomic species, in the mesopause region.

Article says "first measurements" and is published in 2012 September, so perhaps this is new information to the science community?

As it was already mentioned that Hydrogen doesn't exist in quantities large enough, earlier in this thread.

Anyways, the Mesopause Region is where all the sprite lighting occurs and notulecent clouds form.


Night clouds or noctilucent clouds are tenuous cloud-like phenomena that are the "ragged-edge" of a much brighter and pervasive polar cloud layer called polar mesospheric clouds in the upper atmosphere, visible in a deep twilight.

Just a quick interjection: a chemical reaction occurs only on the exterior of atoms with the electrons. The nucleus of the atoms themselves are not affected. The electrons around the nucleus simply change positions around the nucleus creating a structure that locks the two atoms together in a bond.
Nuclear fusion and nuclear fission is when the nucleus of the atoms themselves change either by breaking apart or colliding to a bigger nucleus. This forms entirely new elements and requires enormous amounts of energy far above the scale of any chemical reaction. This kind of process does not occur naturally anywhere on Earth (maybe in the center I'm not sure). It pretty much only occurs naturally in stars. I heard once that the water we have on earth is from comets but I'm not sure If that is the major consensus. I'm almost completely sure it's not formed from chemical reactions of lightning in the air and definitely not created new matter. Lightning creating new matter goes against the first law of thermodynamics. Water is a stable compound and chemically is not disappearing anywhere except in plants when they are making glucose. But we replace that water when we metabolize glucose.
MrGamma

Delong. Yes... no new matter is required. Hydrogen and Oxygen fuse, in a eletro chemical process. Gamma ray bursts, the some of the brightest events observed in the universe, normally in distant Galaxies have been found to exist above storm clouds.


ON A SIDE NOTE

The Swiss are already firing lasers into the sky to make preciipitation with the intent rainfall.

The Chinese are already lacing clouds with silver iodine to promote conductivity.


Ever smell Ozone during a lightning storm? Ever heard a thunder clap, followed by a fast downpour?

Drakkith said:
Earth may have the most visible water of all the planets, but there's no telling how much might be in the gas giants under their outer atmosphere. Even if Jupiter has a small fraction of a percent of water composing it, it could be MORE than all the water on the earth. However I really don't know, so don't take that as a fact..

The last figures I saw on an estimation of the composition of Jupiter's atmosphere put the water content at 0.0004% but considering Jupiter's Mass that figure comes out to approximately 50% of Earths total mass.

Thats a lot of water :)
Log in or register to reply now!

Related Threads on Where did all the Earths water come from?

Where did the water come from in Antarctica?

Where does the earth's water originally come from?

Where does the Earth's heat come from?

Excavations: Where does all that soil come from?

When the earth's core melted, did the diameter of the earth increase?

Did the core of the Earth collide with the Earth billions of years ago?

Did the Moon make life possible on Earth ?
2

How did the earth develop its magnetic field in the first place?