Where on the Moon should the first Moonbase be?

I the main problem with this magnetic acceleratIon approach would be energy supply.
Once your gets vehicle gets bigger than a few tens of kg, the power demand gets beyond what is reasonable to expect from solar.
So there would have to be a nuclear reactor built on Moon first before the rest of the project is feasible.
skystare

rootone
Yeah, a big launcher would definitely need a big powerplant and probably some capacitor storage as well. The initial launcher could be solar powered, 2 or 3 km long, pushing 100 kg payloads at 40 to 60 Gs. LOX would probably be the main revenue source, being as much as 7/8ths the weight of most propellant combos. It should even be profitable to deliver to LEO for refueling space to space and interplanetary vehicles, and stationkeeping needs.
nikkkom
Insights Author

Al_ said:
Should it be on the farside to get radio silence for radio telescopes and explore there, or should it be at the pole for the ice, or in a cave?

The Moon actually isn't a particularly good place for any kind of telescopes: the dust is problematic.

Sure, you can design countermeasures, but why bother? If you can build a Moon base, you can surely just send telescopes to space - the best place for them.
OmCheeto
Gold Member

nikkkom said:
The Moon actually isn't a particularly good place for any kind of telescopes: the dust is problematic.

Sure, you can design countermeasures, but why bother? If you can build a Moon base, you can surely just send telescopes to space - the best place for them.

I didn't know that dust was a problem on the Moon.
<google google google>
But I see you are correct.

...the moon is a hostile environment, full of charged and abrasive lunar dust that can get into equipment and destroy electronics, as Yutu’s troubles demonstrate. To counter this, the telescope is stowed within Chang’e 3 during sunrise and sunset on the moon, when dust is thought to be at its worst, and has survived much longer than its expected one year life. Wang says the scope is still working today, and the team are awaiting a decision to continue its mission past the end of this year.​
But this makes me think that a properly located moon base is a really interesting idea. I googled and found someone who implemented one of my ideas: Solar based 3d printing!

After starting off with what looks like a jaunt through the dunes of Tatooine, this video from Markus Kayser will eventually bring you to a 3D printer that uses the immense power of the sun to turn sand into glass.​
And if you can turn sand into glass, then you can turn sand into solar pv collectors*. Which, properly located, can power a magnetic rail launch system, to put a bazillion hexagonal reflecting mirrors into a moon orbit, which can be combined into a JWST design inspired telescope.

I think it may have been my 4 years on a nuclear powered submarine that makes me think the idea of a moon base is quite plausible. (Even though I don't remember how 90% of that stuff, that makes it all possible, works. I just know that it does.)

*Solar pv collectors?
Ok, I don't really understand how pv collectors work, but I know that their primary component is elemental silicon, and I know that the moon has plenty of that. The moon of course has different advantages and disadvantages regarding pv solar collection compared to here on Earth:

Dust, and vacuum cleaners wouldn't work there​
The advantages mean that they would probably not look like anything here on Earth. (no glass cover, no frame, etc, etc)
Not sure how to deal with the dust.

[off topic]
My idea was a 3d silicon lattice, similar to what I created about 5 years ago at our local science and industry museum, with what they called; "3d printing", but which I called, "a hot glue gun with plastic material instead of glue". 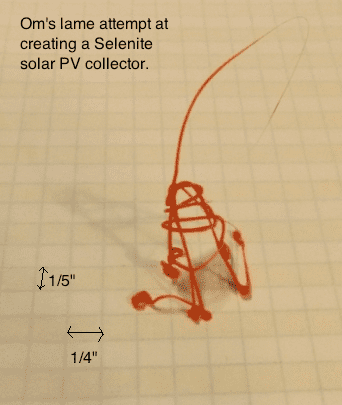 OmCheeto said:
note: These numbers are for a surface orbit. I'm not really sure where the best lunar orbit is, so I didn't bother calculating the extra energy to get there.

If you are shooting for a low lunar orbit, you are limited to a few possible inclinations for stable ones. (due to the various mascons buried beneath the Moon's surface.) These so-called "frozen orbits" are at inclinations of 27, 50, 76 and 86 degrees( it wasn't until 2001 that these were discovered; up until then it was thought that there were no stable low lunar orbits.)
skystare

Lunar dust is indeed a problem - does anyone know how high it levitates? Would the top of a 10 or 20 metre pole be sufficient to keep a PV panel clean? Quite a flimsy structure would suffice with no wind to consider.
OmCheeto
Gold Member

skystare said:
Lunar dust is indeed a problem - does anyone know how high it levitates? Would the top of a 10 or 20 metre pole be sufficient to keep a PV panel clean? Quite a flimsy structure would suffice with no wind to consider.

THE MYSTERY OF MOON DUST [newyorker]
By Kate Greene November 6, 2013

"The dust not only coats the moon’s surface, but floats up to sixty miles above it"​
Interesting article.
OCR

rootone said:
We have not yet even constructed a permanently inhabited colony under the Seas of Earth...

The one that was constructed above the Seas of Earth, didn't work out all that well either. Remember Biosphere 2 ...?

On the moon, when things don't work out all that well, it's a bit difficult to just open the doors, and walk away.
You must log in or register to reply here.

Related Threads for: Where on the Moon should the first Moonbase be?

Are there any caves on the Moon?

Mapping Underground Caves/Tunnels on the Moon/Mars

B Where is the CG between the Earth and the Moon

Was the first moon landing a fake?