Why does a Moebius strip twist unevenly along its length?

This localization of the twist has also been found to occur in (both real and theoretically constructed) Moebius strips made of benzine or other chained molecules, which took the researchers investigating this phenomenon by surprise.

This raises for me the following questions:

1) Why, in all these physical situations, is the twist not evenly distributed along the strip?
2) Is a regular twist possible to achieve in any non-rigid material? (I specify non-rigid because it seems that one could cast such a thing in bronze or concrete, 3-D print such a form, or even construct one of superconducting materials...although even most such forms seem to have regions of greater and regions of lesser twist)

You cannot link to images in your google mail. How are we supposed to see them without logging into your google account.
Spinnor
Gold Member

If you follow a letter around it twists about its path at a constant rate. Notice the distortion of the text is maximum on the right hand side. Paper does not like to distort like that. 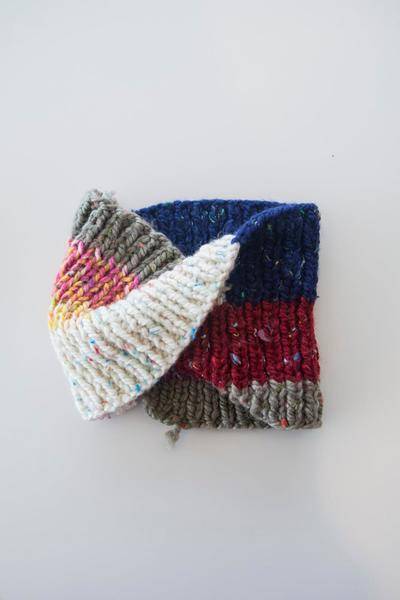 Harlan said:
1) Why, in all these physical situations, is the twist not evenly distributed along the strip?

The shape will depend on how easy the initial straight strip bends one way (roll) vs. how easy it bends the other way (curve in plane with edges stretching).

Using the knitted version as a model, consider this. The same situations apply to the others but it's easier to see with the knitted one.

The same thing happens with the Mobius strip. It just turns out that the lowest energy configuration is for the 'extra material' on the edges to exchange places so that there is only one ripple. In fact, even the 'donut' may have only one ripple in it (you could flatten it though so there are many small ripples).

EDIT: Looks like @A.T. found the complete version while I got interrupted during the short version.
A.T.
Science Advisor

Harlan said:
2) Is a regular twist possible to achieve in any non-rigid material?

I assume you mean sarting with a staight strip, then bending it to connect the ends with twist? If you vary the stiffness parameters for the different bending directions along the strip, then it should be possible to get constant twist rate and a circular center-line, like in the animation text animation above.

But whether achieving this with a constant combination of stiffness parameters is also possible, that's harder to say. Intuitively, when you make the loop from a rod with a circular cross section, then there should be a combination of bending stiffness (same in all directions) and torsional stiffness, that results in that shape. Maybe you just need high torsional stiffness.
Share:
Share

Related Threads on Why does a Moebius strip twist unevenly along its length?

M
Cannon Length: Why does it matter?

W
Why does f(x-vt) represent a wave along +x?

Why does a boat lean into its turn?

Why does a tubes length affect wavelength of soundwave?

Why does stretching a rubber band increase its temperature?

N
Does the length of a wire affect its resistance?

Why does measuring the position of a particle change its momentum?

K
Why are Trebuchets better than Torsion Catapults?