A test for a superluminal neutrino?

The neutrino has been puzzling since its proposal and its experimental confirmation.
There have been experimental anomalies with it for every experiment designed to test it.

One fact that might be quite key is that measurements of the mass-square of the neutrino has consistently shown it to have a negative mass-square:

Why is the square of the neutrino mass negative?
In arXiv:hep-ph/0009291 this is explained by giving the example of:

"The negative value of the neutrino mass-square simply means:"

This has led to speculation the neutrino may be a tachyon. Another unusual fact about it is that its cross section gets larger at higher energies and smaller at lower energies. And with a tachyon, in contrast to a bradyon, higher energy means it is going slower, and lower energies means it going faster. This would explain why it would be harder to interact with at the lower energies.

However, with the unfortunate mistake at the OPERA experiment where is was offered a superluminal neutrino to explain an experimental anomaly, any such claim needs to have overwhelming support to confirm it.

I was thinking of having the neutrino travel through the Earth and be detected on the other side. However, even at the speed of light the travel time would be quite short and given the difficulty of detecting the neutrino it would be difficult to get the timing accurate enough to make sure the detection was above background.

Then I wanted a longer travel time. Could we have an accelerator generated neutrino pulse be aimed at the Moon or Mars or Venus, and look for the neutrinos scattered back to be captured here on Earth? Because of the low cross-section it would have to be an extremely dense beam to have enough particles to bounce back to be detectable.

From your last thread, it's clear that - at best - you think we know no more than we did two decades ago. A good starting point might be to catch up before deciding you know how to do neutrino experiments better than the neutrino experimenters.
phinds
Science Advisor
Insights Author
Gold Member
2022 Award

The neutrino has been puzzling since its proposal and its experimental confirmation.
There have been experimental anomalies with it for every experiment designed to test it.

As @Vanadium 50 pointed out, you REALLY need to do a lot more reading to avoid making incorrect statements..
ohwilleke
Gold Member

RobertGC said:
Why is the square of the neutrino mass negative?
In arXiv:hep-ph/0009291 this is explained by giving the example of:

"The negative value of the neutrino mass-square simply means:"

Your post is based upon a false premise rooted in a misunderstanding of a somewhat confusing form of notation that does not have the physical implications that you suggest.

The article you cite to doesn't mean what your post suggests that it does.

The result cited is simply a consequence of providing a result in the form of a Gaussian uncertainty (i.e. an uncertainty described in a manner that implicitly assumes that the uncertainty is distributed in a "normal' distribution) in circumstances that are strictly beyond the scope of applicability of Gaussian probability and statistics stated in that form, because we are sure that this isn't the true shape of the probability distribution.

If the authors wanted to be really rigorous and mathematically pedantic in their report of their results, they would have reported the probability in a manner consistent with a lower bound of zero for the neutrino mass, because the experimental methods used do not have, and do not purport to have, a way to identify a true imaginary neutrino mass, or superluminal neutrino.

In other words, their experimental result (considered in isolation without joint analysis with other experimental data, and rounding to avoid the impression of spurious accuracy) is consistent with:

But, ultimately, as long as the trained scientists are aware that their results are being reported in a slightly unrigorous manner so that they don't try to use the results inappropriately in a manner beyond the range of applicability, and so long as everyone reports their results in a manner consistent with this Gaussian error convention, everything works out. Physicists can still make apples to apples comparisons can be made between the results of different experiments, and this isn't a serious problem.

We know from other lines of evidence (mostly cosmology corroborated by neutrino oscillation data and a certain amount of physics intuition) that the true value of the smallest neutrino mass eigenstate is realistically probably less than 0.012 eV/c2, and quite likely less than 0.001 eV/c2, which is a value indistinguishable from zero in the experimental results cited.

So, it makes sense that the probability distribution of possible neutrino masses consistent with the experimental result should be concentrated near the floor of that distribution. Indeed, this result is just what we would expect for a reality as we think it is likely to be, reported in this somewhat quirky method preferred by physicists.

If the probability distribution of the neutrino mass that the experimental results suggest were Gaussian, it would look like: 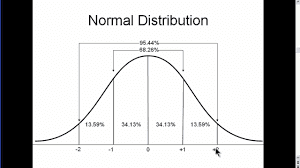 The real probability distribution of the neutrino mass implied by this experiment looks closer to the green line in the image below, only even more steeply peaked near zero (with the red line peaking at a z= -0.65 value on the z score normalized image below): 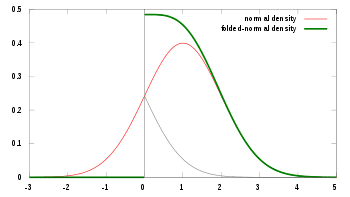 Notwithstanding this contradiction, it is customary for physicists to refrain from using that level of rigor, and to instead express their experimentally results in the somewhat inartful manner quoted in your original post in this thread.

Rather than having any profound meaning, it is simply a matter of a somewhat sloppy notation convention that the physicists have adopted on a widespread basis, because it is convenient and saves a lot of tedious rote statistical analysis that adds little of substance of the basic conclusion.

This convention of using a Gaussian error format to report values to which a continuous Gaussian probability distribution doesn't apply is widespread in physics, both in other aspects of neutrino physics and in other subfields of physics.

Another Example Of This Form Of Mathematically Non-Rigorous Gaussian Notation

Similarly, for example, the experimental evidence regarding the number of active Standard Model neutrinos is quoted by the Particle Data Group as 2.996 ± 0.007, even though the quantity described is inherently defined such that it must be either zero or a positive integer.

Suggested for: A test for a superluminal neutrino?

I About neutrino anomalies

I Neutrino detection at Cern

B Question about photons and neutrinos

I Neutrino Helicity and Spin Uncertainty

A Neutrino decay before electroweak breaking