its quite exciting when I see the big signals coming in
but its tainted with the knowledge that if the quake is on land or near the coast, there is probably dire consequences
davenn
Science Advisor
Gold Member
2019 Award

OK a couple of seismograms ....

this second one is the processed version with the quake info data added ( timing, depth, location etc)

KATHMANDU, Nepal (AP) — A powerful earthquake struck Nepal Saturday, killing at least 906 people across a swath of four countries as the violently shaking earth collapsed houses, leveled centuries-old temples and triggered avalanches on Mt. Everest. It was the worst tremor to hit the poor South Asian nation in over 80 years.

Related Stories
At least 876 people were confirmed dead in Nepal, according to the police. Another 20 were killed in India, six in Tibet and two in Bangladesh. Two Chinese citizens died at the Nepal-China border. The death toll is almost certain to rise, said deputy Inspector General of Police Komal Singh Bam.

"Our village has been almost wiped out. Most of the houses are either buried by landslide or damaged by shaking," said Vim Tamang, a resident of Manglung village near the epicenter. He said half of the village folks are either missing or dead.

There is a swarm of quakes in the 4-5 mag range east of the major quake. Earthquakes are near Nagarkot, Banepa, Panaoti and Kodari.
Last edited by a moderator: May 7, 2017
Dotini
Gold Member

It is a curious coincidence that this massive earthquake is almost directly antipodal to the massive Calbuco volcanic eruption that began Wednesday afternoon.
AdityaDev

Davenn said:
where are they located ?

My place is approx. 3500km from nepal. The tremors were felt in many cities in india. They were expecting a second one.
Evo
Mentor

AdityaDev said:
My place is approx. 3500km from nepal. The tremors were felt in many cities in india. They were expecting a second one.

I hope that you and you loved ones are safe.
Astronuc
Staff Emeritus
Science Advisor

Yet another strong earthquake (mag 6.7) in the valley
http://earthquake.usgs.gov/earthquakes/eventpage/us200029bt#general_summary

Big Aftershocks In Nepal Could Persist For Years
http://www.npr.org/blogs/thetwo-way/2015/04/27/402576900/big-aftershocks-in-nepal-could-persist-for-years
ianchristie

Dotini said:
It is a curious coincidence that this massive earthquake is almost directly antipodal to the massive Calbuco volcanic eruption that began Wednesday afternoon.

The most troubling thought in the minds of those affected by this disaster is the lingering fear of another deadly earthquake being round the corner. These kind of events not only cause physical damage, but mentally scar the survivors very deeply as well. The psychological implications are sometimes short termed and lethal - for example, in the 1994 Los Angeles earthquake, a significant portion of deaths were because of cardiac arrests from fright during the earthquake, and not from its after effects. In other cases, the effects are slow and poisonous, eating away at their victims all their lives. Living in dread and sorrow is truly the most terrible way to live indeed. May those subject to this tragedy find solace, and those who have departed from this world eternal tranquility.
Last edited: Apr 28, 2015
OmCheeto
Gold Member

Fascinating images coming in from the ESA. 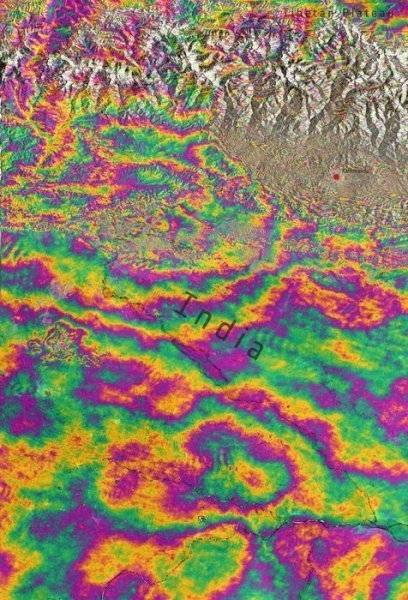 Description: Combining two Sentinel-1A radar scans from 17 and 29 April 2015, this interferogram shows changes on the ground that occurred during the 25 April earthquake that struck Nepal. An overall area of 120x100 km has moved – half of that uplifted and the other half, north of Kathmandu subsided. Vertical accuracy is a few cm.

Has anyone heard or read if Everest changed height at all?
Astronuc
Staff Emeritus
Science Advisor

I don't think Everest was affected, but some land near the epicenter was raised about 10 feet (3.3 m).

Dotini said:
It is a curious coincidence that this massive earthquake is almost directly antipodal to the massive Calbuco volcanic eruption that began Wednesday afternoon.

Researchers think Axial Seamount off Northwest coast is erupting – right on schedule
04/30/2015
...
Since last Friday [ April 24th! ], the region has experienced thousands of tiny earthquakes – a sign that magma is moving toward the surface – and the seafloor dropped by 2.4 meters, or nearly eight feet, also a sign of magma being withdrawn from a reservoir beneath the summit. Instrumentation recording the activity is part of the NSF-funded Ocean Observatories Initiative. William Wilcock of the University of Washington first observed the earthquakes.
...


cpscdave said:
Has anyone heard or read if Everest changed height at all?

Mount Everest Shrank As Nepal Quake Lifted Kathmandu
by Becky Oskin, Senior Writer | April 29, 2015 10:13pm ET
...
The radar images reveal that some of the world's tallest peaks — including Mount Everest — dropped by about 1 inch (2.5 cm), according to the nonprofit UNAVCO, a geoscience research consortium.
...

But the article continues, and states that the Himalayas are rising about 0.4 inches (1 cm) per year, so a 1 inch drop is pretty insignificant, IMHO.
Dotini
Gold Member

The ionosphere is very sensitive to solar storms. Turns out, it can be sensitive to earthquakes, too. NASA is reporting that the magnitude 7.8 earthquake in Nepal on April 25th created waves of energy that penetrated the ionosphere and disturbed the distribution of electrons. Note the wave pattern, circled, in the upper panel of this ionospheric electron density plot: 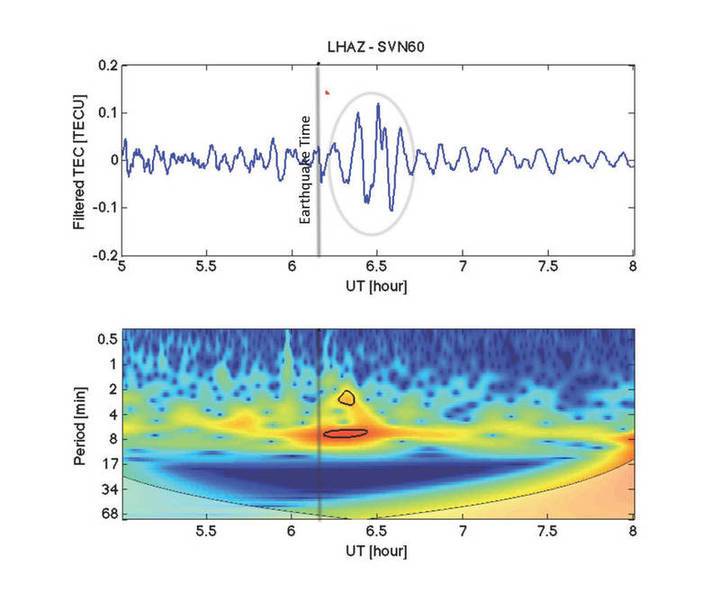 The bottom panel of the plot is a "dynamic spectrum." Note the hot spots outlined in black. They show that the ionosphere was ringing with periods of ~2 and ~8 minutes. Presumably, these "tones" are related to atmospheric pressure waves billowing up from the trembling Earth below.

Another large quake in Nepal, M 7.3, located around 150 km east of the M 7.8 last month
I don't think it would be correct to call this an aftershock of the 7.8, as it lies well outside the aftershock zone of that event

It would be much more likely and better to call this a new event, but induced by the changed stress field in the region after the 7.8 Knowledge of these changing stress fields in fault lines after quakes is not new, They came to prominence particularly after the M 6.7 Northridge, California quake of Jan 1994, where remote imaging from satellites clearly showed how the new stresses had moved to the regions beyond either end of the rupture zone. Nothing has happened in those regions in the last 20 years and one would assume ( sometimes a bad thing) that existing stresses plus the addition stress is not enough to cause a new rupture yet.

Considering the large size of the event last month and the relatively rare occurrence of suck events in this region, it would be easy to conclude that significant stresses in the plate boundary along the Himalayan front have been building for a long period of time, 100+ years. And that, unlike the Northridge situation, it didn't take too much more change in the stress field to the east of the 7.8 to tip the balance and allow this M 7.3 to occur.

It will be interesting to see in time if studies are done of these events by the USGS or universities, if they show the changes happening in the region

I would expect that this quake is a separate event, but on the same system.
M7.3 - 18km SE of Kodari, Nepal
http://earthquake.usgs.gov/earthquakes/eventpage/us20002ejl#general_summary


A magnitude 7.3 quake has struck the Nepal-Tibet border, killing more than 41 people and leaving 1100 injured, as buildings weakened by a devastating quake less than three weeks ago collapsed.

The quake, which struck near the base camp for Everest, 22 kilometres south-east of Zham, China, and 83 kilometres east of Kathmandu, Nepal, was measured at a shallow depth of about 18.5km (revised from 10km).

It was felt as far away as New Delhi, India, and Dhaka in Bangladesh.

An initial magnitude of 7.4 was recorded before the earthquake was downgraded to 7.3. It struck about 7.30pm Tuesday NZT.

The Home Ministry increased the death toll to 41, with more than 1100 people injured.

The quake was quickly followed by aftershocks of 5.6, 5.4 and 6.3 magnitude within half an hour.

It was at 7pm last night they had a clip on the Mt Everest avalanche -- http://www.3news.co.nz/tvshows/campbelllive/doctor-ignored-own-injuries-to-help-others-in-avalanche-2015051218?ref=video#axzz3ZxG6OTaA [Broken]
Last edited by a moderator: May 7, 2017
certainly

Also, I created another thread for this, more focused on donations, here.
Last edited: May 12, 2015
Astronuc
Staff Emeritus
Science Advisor

Here's an image of the earthquake locations today. The largest circle is the mag 7.3.

Another large quake coming in NOW