Check my solution to this dynamics problem.

I found this problem while preparing for the qualifying exams and thought I would tackle it. I have no idea if it is correct, but I would like someone to tell me if there is an easier way to solve this than I used. Perhaps some Lagrangian or Hamiltonian approach? Thanks.


The situation is as follows. A solid disk of radius R and mass [itex]M_{w}[/itex] is resting on its edge on a horizontal plane surface near a rigid vertical pole. Free to slide frictionlessly on the pole is a collar of mass [itex]M_{c}[/itex]. Connecting the collar to a frictionless pin at the center of the disk is a thin beam of length [itex]L[/itex] and mass [itex]M_{b}[/itex]. The angle between the beam and the plane is [itex]\theta_{0}[/itex]. Assuming the system is released, find an expression for the velocity of the collar when the angle is θ.

To solve this I used conservation of mechanical energy.
The initial energy is all potential, and the energy at θ (once the system is released) is a mixture of kinetic and potential.

Now we find the energies of the components when the system is released.

So putting this all together, we get an expression for the total energy of the system after release.


Equating this with the initial energy, and solving for [itex]V_{c}[/itex] yields:


For definiteness, I use:

I believe you have the ratio of velocities of wheel and collar inverted. Haven't checked any further.
(It wasn't obvious how the beam is attached to collar and wheel, but judging from the equations they seem to be a joints that move freely in a vertical plane; and I guess the pillar is in the plane of the disc.)
mfig

I will double check that.

Anyone else have a look? Thanks!

Here is an image I drew with Paint.

I added an image. Hopefully this helps clear up anything that wasn't clear from my description.
mfig

I think haruspex is correct about the velocity ratios being inverted. The correct relation is:

So I fixed this and now get this solution. Note only one term was affected.

Can anyone think of another way to solve this that is simpler? Even a hint will help. Thanks.
Last edited: Aug 29, 2012
haruspex
Science Advisor
Homework Helper
Insights Author
Gold Member
2022 Award

Looks to me that the inversion of the velocity ratio also affects the final term in your last line, making it collapse to Mb sec2(θ)/8.
Similarly, for ωb, I get Vc sec(θ)/L: Vc = (d/dt)(L sin(θ)) = L cos(θ) ωb
It can be confusing trying to work out these velocity relationships. Safest is to write down the distance relationship then differentiate.
mfig

Now I am confused, haruspex. I used this picture to find the expression for the angular velocity of the beam.
I was trying to find the component of the collar's velocity perpendicular to the beam, as shown, then use

R here is L/2 and V is the velocity of the collar. Why is this wrong? 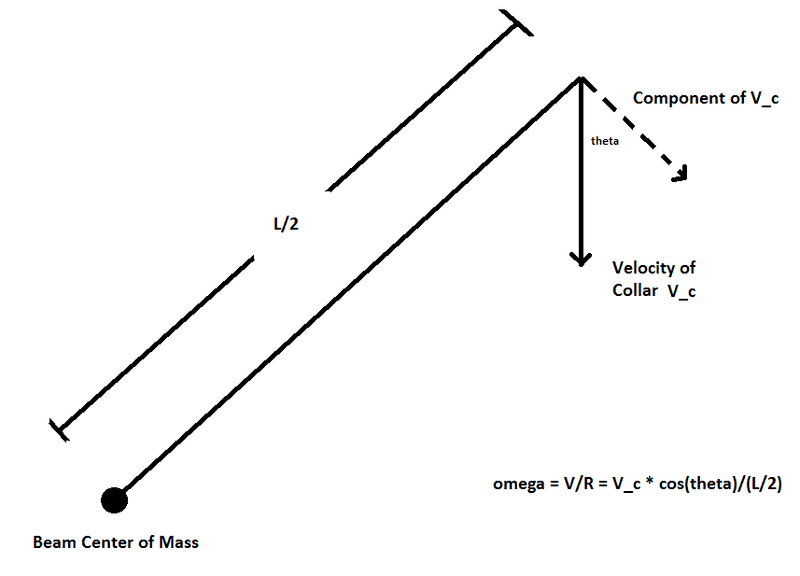 It's wrong because you've left out the fact that the disc's movement also contributes to the rotation of the beam.
mfig

How is it even possible to have two ends of a rigid beam turning it at different rates, perpendicular to the axis of rotation, without bending the beam?

Even then I still get a factor of 2 that you don't have.

Now the sum is:

As you had. I have a factor of 2 that you don't. Where did I go wrong this time?

spamanon said:
I assumed that the perpendicular components of the velocities of both ends of the beam would be the same.

If that were the case then the instantaneous centre of rotation would be the beam's centre, but in general that will not be so.
Consider a plank standing upright against a wall. If you slide the bottom end away from the wall, the instantaneous centre of rotation will at first be the top end of the plank. Nearly all the linear movement at this time is at the bottom end, and the rotation rate will be that movement speed divided by the plank length.
When the plank has dropped to 45 degrees, the two ends are moving at the same linear rates, v say. The instantaneous centre of rotation is now the centre of the plank.
More generally, at angle θ to the horizontal, the height of the top end of the plank is L sin(θ), and the distance of the bottom from the wall is L cos(θ). If the rotation rate (dθ/dt) is ω then the two speeds are L cos(θ) ω and L sin(θ) ω respectively (chain rule).

we simply add each contribution to get ω?

What you say makes good sense. I sincerely appreciate your patience with me on this. I want to re-learn this stuff but it has been a long time.

So the instantaneous point of rotation will not be the center. That means we cannot just add the contributions. But what method can we use to get to ω? You say it is " more like a root-sum-square" but what does that mean? Is it a root-sum-square or only like one? You got a definite result, so please show me how you arrived there. Did you explicitly find an expression for the instantaneous center of rotation?

You could take one endpoint as the frame of reference. The relative movement of the other end is just the difference of the two movements as vectors. Since the beam is constant in length, this is necessarily perpendicular to the beam, so you can then just take its magnitude and divide by the beam length. You can see this trivially gives the right answer when the movements are parallel. In the present case, the movements being perpendicular to each other, the resultant has root-sum-square magnitude.
Share:
Share

Suggested for: Check my solution to this dynamics problem.

How to check if search problem has no solution in depth limit search?

How to calculate the speed of this umbrella extension arm?

Engineering Dynamics Problem with a Driving Force, 2 Wheels, a Spring and a Damper

Engineering How to solve this problem by the method of superposition?

Engineering [Intro Dynamics] How to obtain v(t) from v(r) in 3D?

Engineering Is my method of solving this correct? Superposition theorem